Late Sunday morning we pulled pins and headed downstream towards Thrapston.  The river levels were fine but as rain was forecast for most of the coming week we thought getting our water tanks topped up and our boats the other side of the low bridge at Islip/Thrapston would be prudent.

Water supply is becoming a bit of an  issue on the R. Nene as advertised water supplies at Wellingborough and now Irthlingborough have been withdrawn.  We can go a week on our fresh water supply but as we want to moor up and enjoy the river experience it would be useful to know that when we plan to take on water there IS a supply available.  As a consequence I have emailed the Environment Agency requesting an up dated and accurate list of what facilities are available to boaters on the Nene and the Great Ouse.

Back to Sunday....
Jill went off to avoid any work to park their car and walk back to meet the boats.... Floyd and Fletcher and I walked the towpath and operated the locks for the two boats.   Unlike the canals however the 'towpath' diverts away from the river course from time to time so my little fat legs had to scramble around field margins and woodland plantings to keep with the boats. 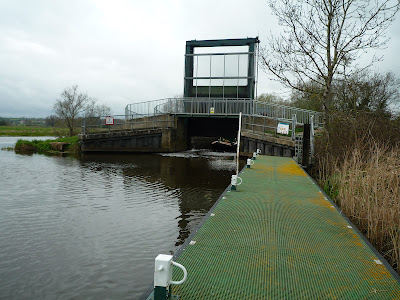 Woodford lock, Yarwood just edging out to pick me up from the lock landing

After Lower Ringstead lock and with the prospect of another lengthy diversion from the river course  I hitched a lift on Yarwood's tug deck to Woodford lock.  It was here two years ago when were met Nb Indigo Dream and while Sue and Richard, Jill and Graham, Joe and I caught up with each others news the canine members of the crews romped around the lock island.
By the time we arrived at Denford lock Jill had appeared and the rain had started so it was decided that we would abandon our plans to head on to Thrapston.  We rafted-up, or breasted-up i.e.  moored alongside each other.  With the MR crew able to cross our deck for access to the bank we planked up and secured the boats before heading the few yards into Denford village and Sunday lunch at the local pub. 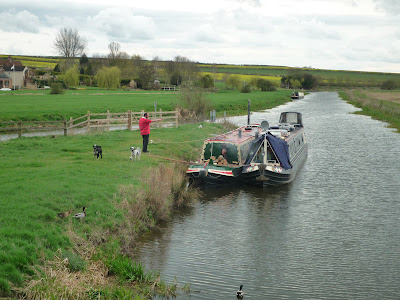 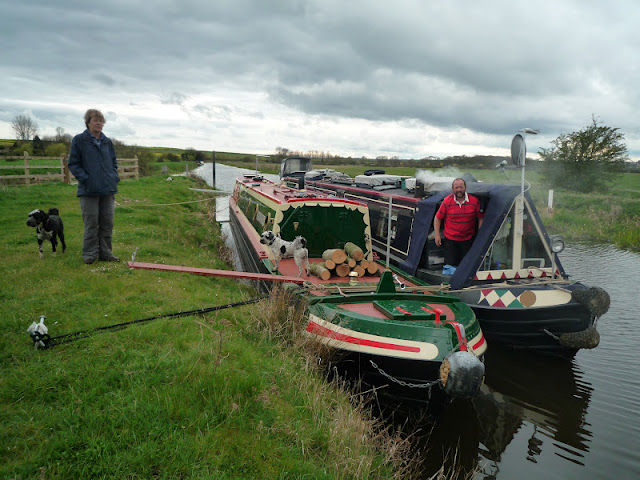 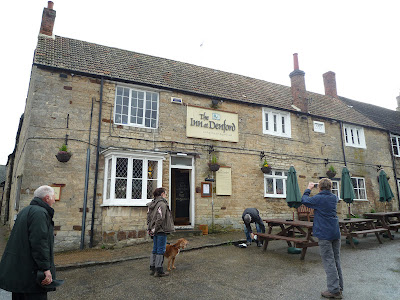 The Cock Inn at Denford.

The Cock Inn at Denford is a MUST stop.  The landlord is the top of his game, the welcome, both for dogs and humans was lovely, the atmosphere was warm, the open log fire also warm and the food very good - oh and the beer was very well kept as well!
Posted by Nb Yarwood at 08:10