I was still slobbing around in my PJ's at 11.30am when we decided to go out yesterday.  I had a hasty shower and then prepared a pack-up (picnic), including a bag of dog biscuits and chews for the canine members of the party, and then off we went driving north towards Cordoba.  We decided to explore a little more the the green way - Vias Verde -  we had found a couple of weeks ago.  There are numerous green ways, converted dismantled railway tracks, covering some 1900kms in Spain but we haven't managed to track down any maps of them yet and there is no such thing as an Ordnance Survey Map so our exploring is a bit hit an miss.

Update: There is a road map published by the Ministry of /transport/interior?? that includes the Vias Verde in green apparently; I have now to try and locate a bookshop that sells them or I will have to deal with The Ministry direct and get it on line, in Spanish...oops 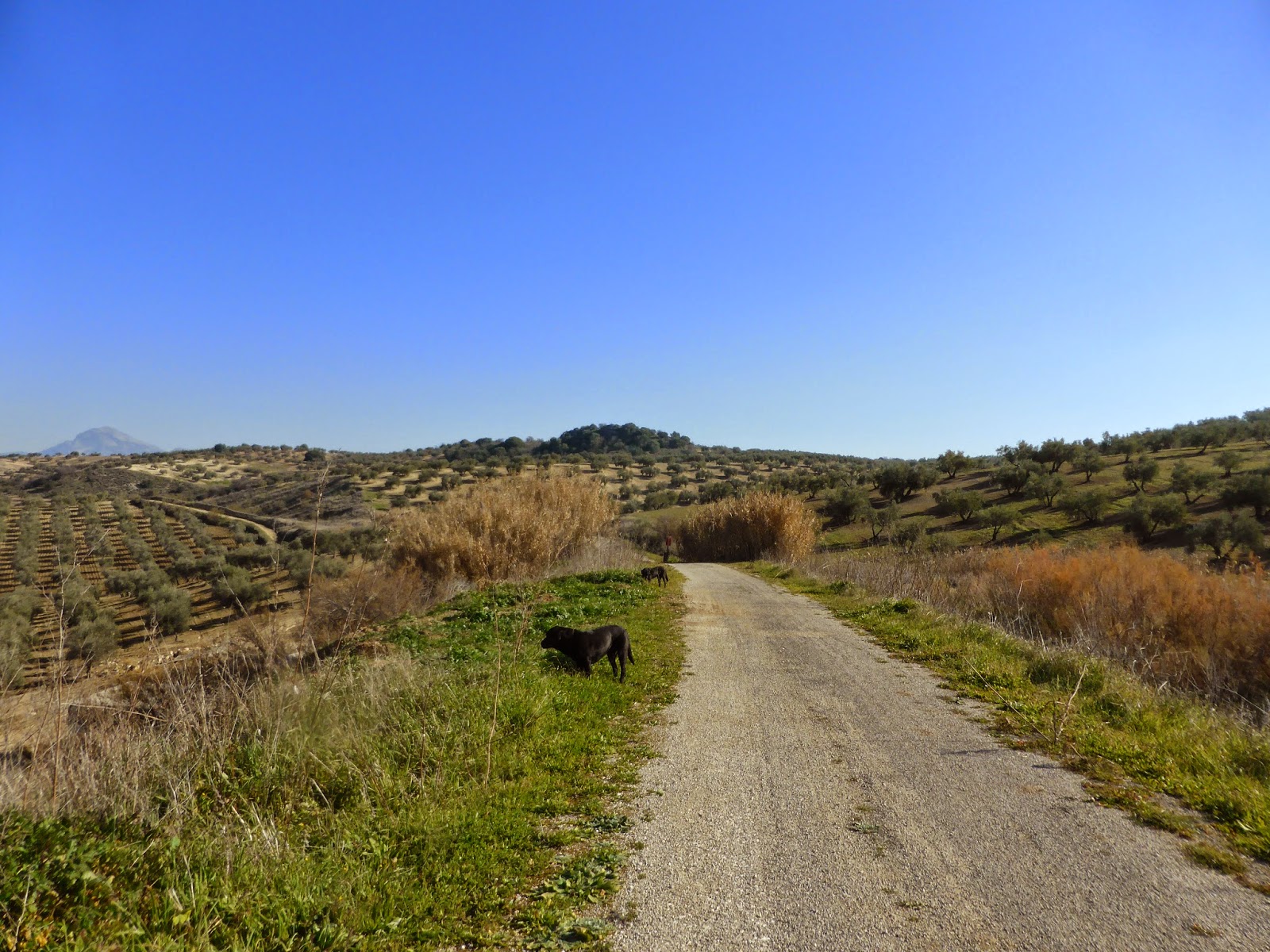 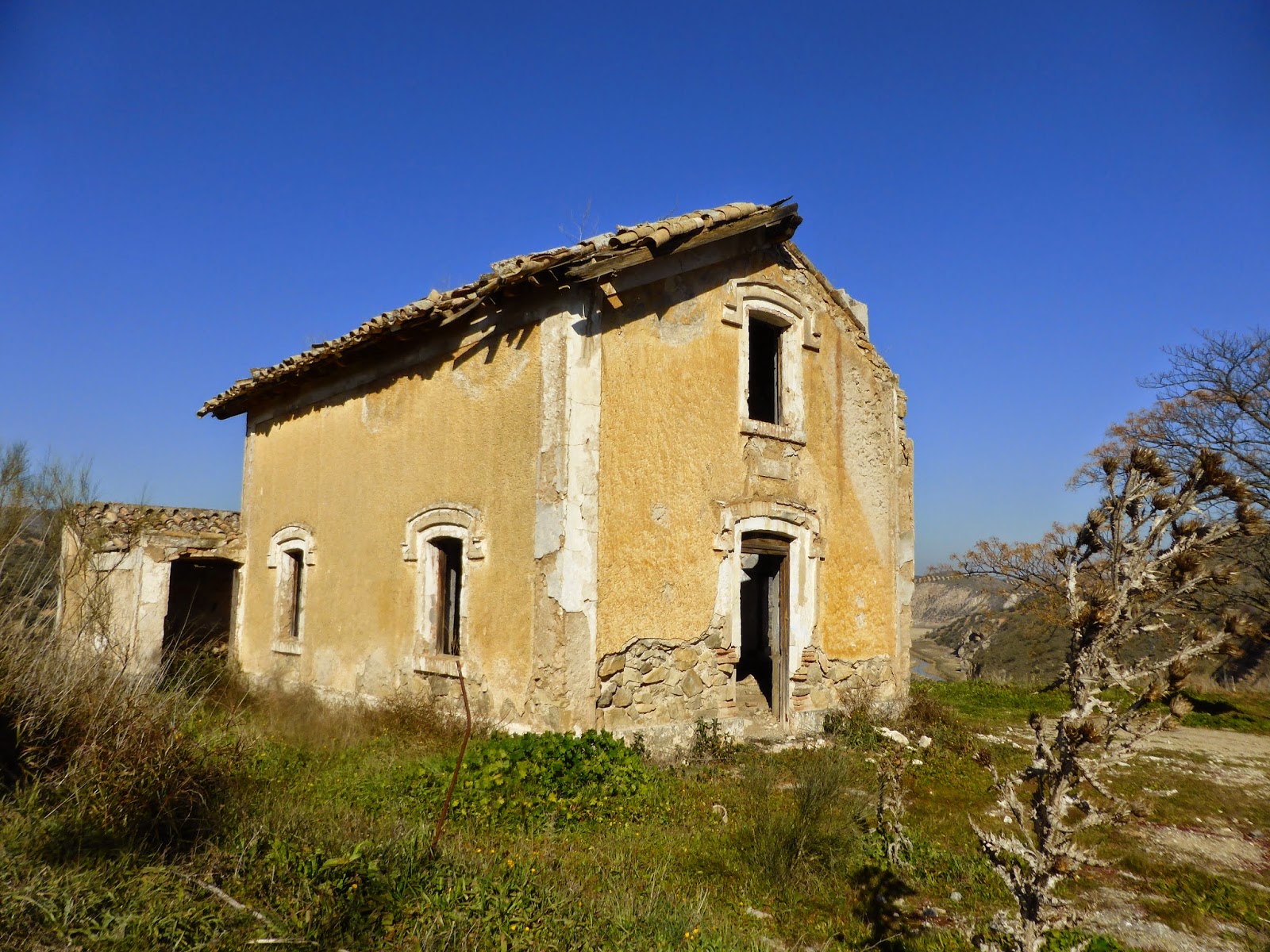 The remains/ruins of one of the station buildings.  They are quite ornate though this is only the second one we have come across so far.  Apparently a number of its fellows have been converted into rest stops, cafes, accommodation and even cycle hire shops. 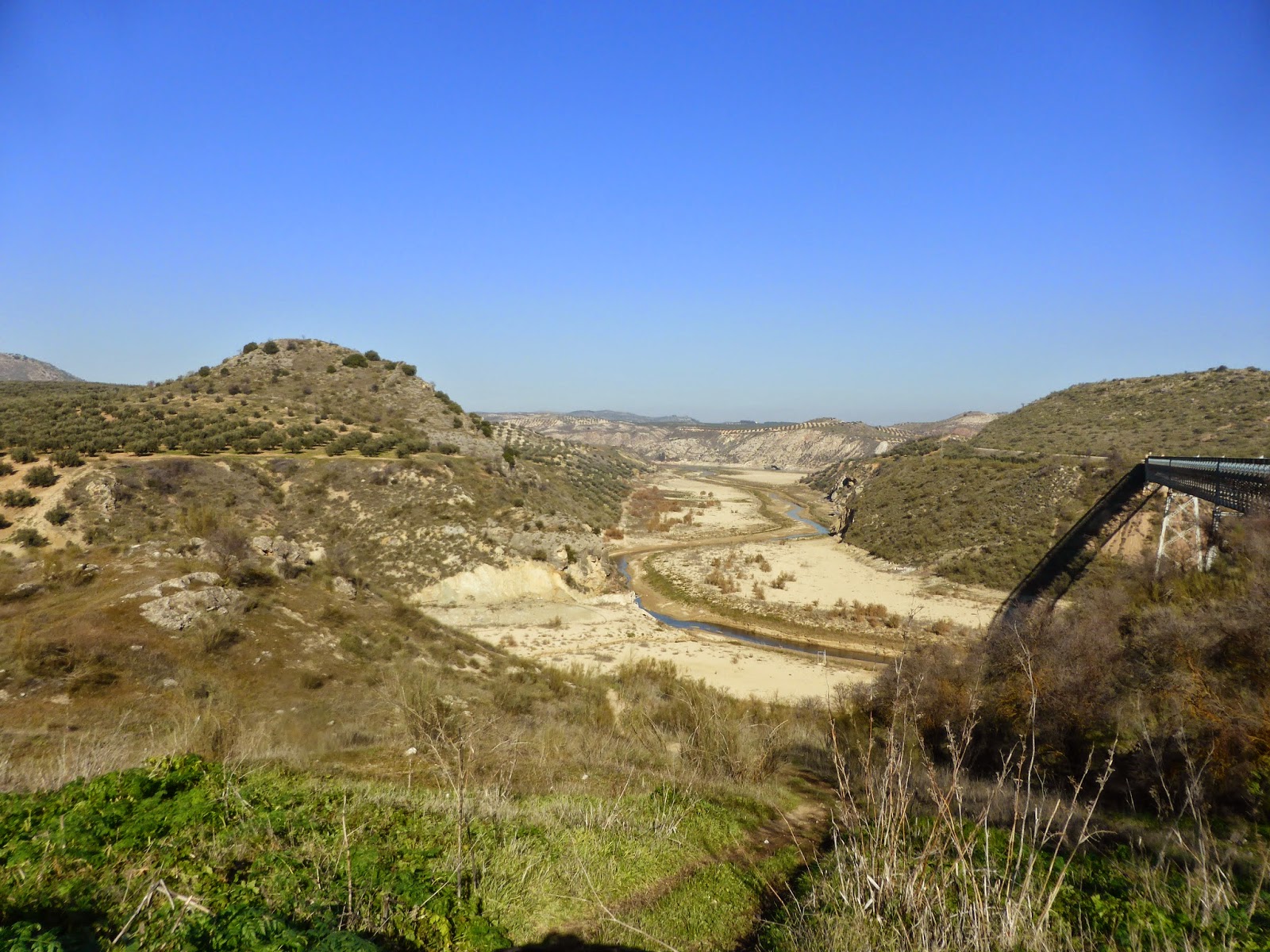 We have just approached a via duct that crosses this valley.  The Rio (river) flowing through below is the Rio Guadojoz. 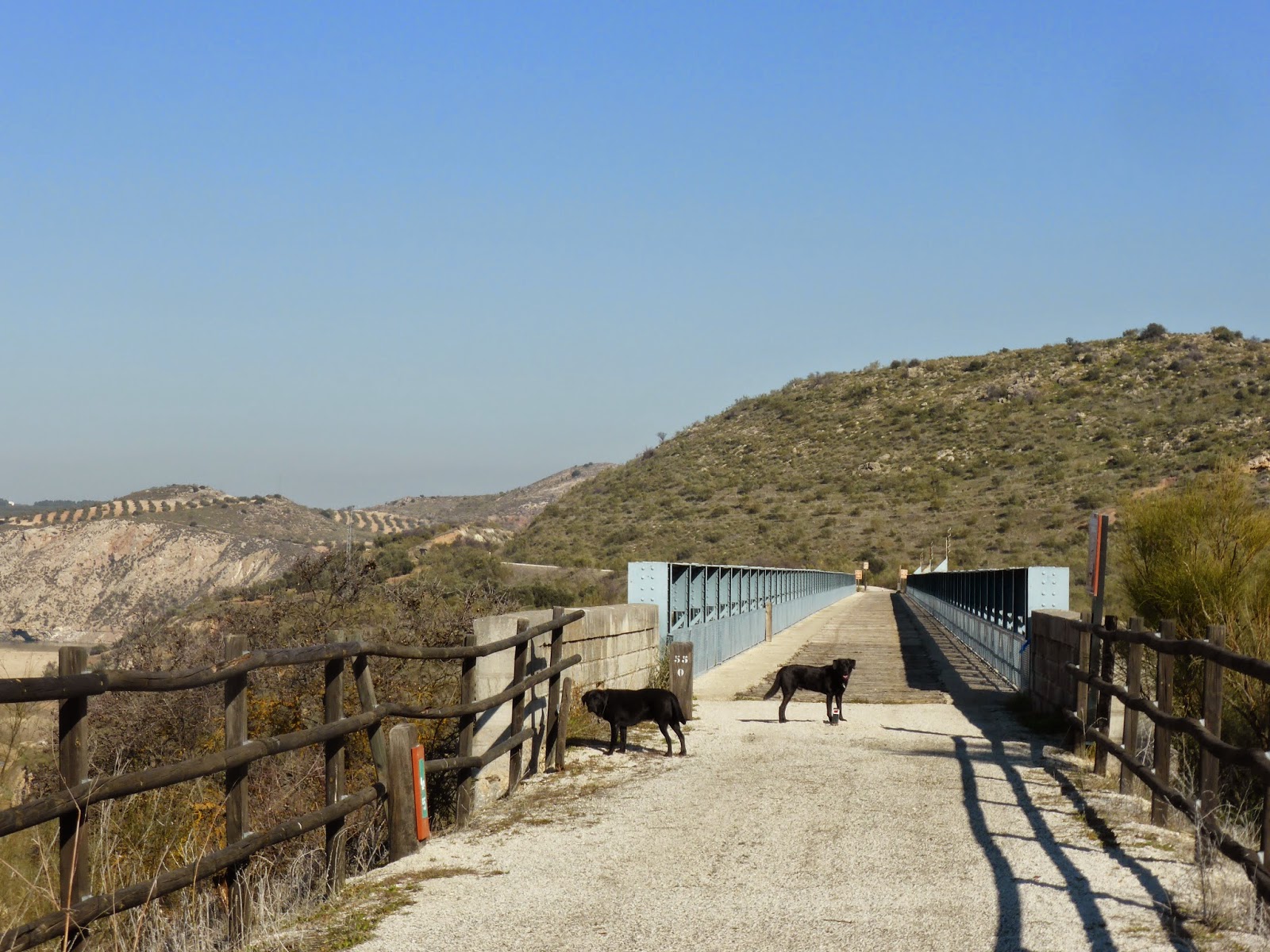 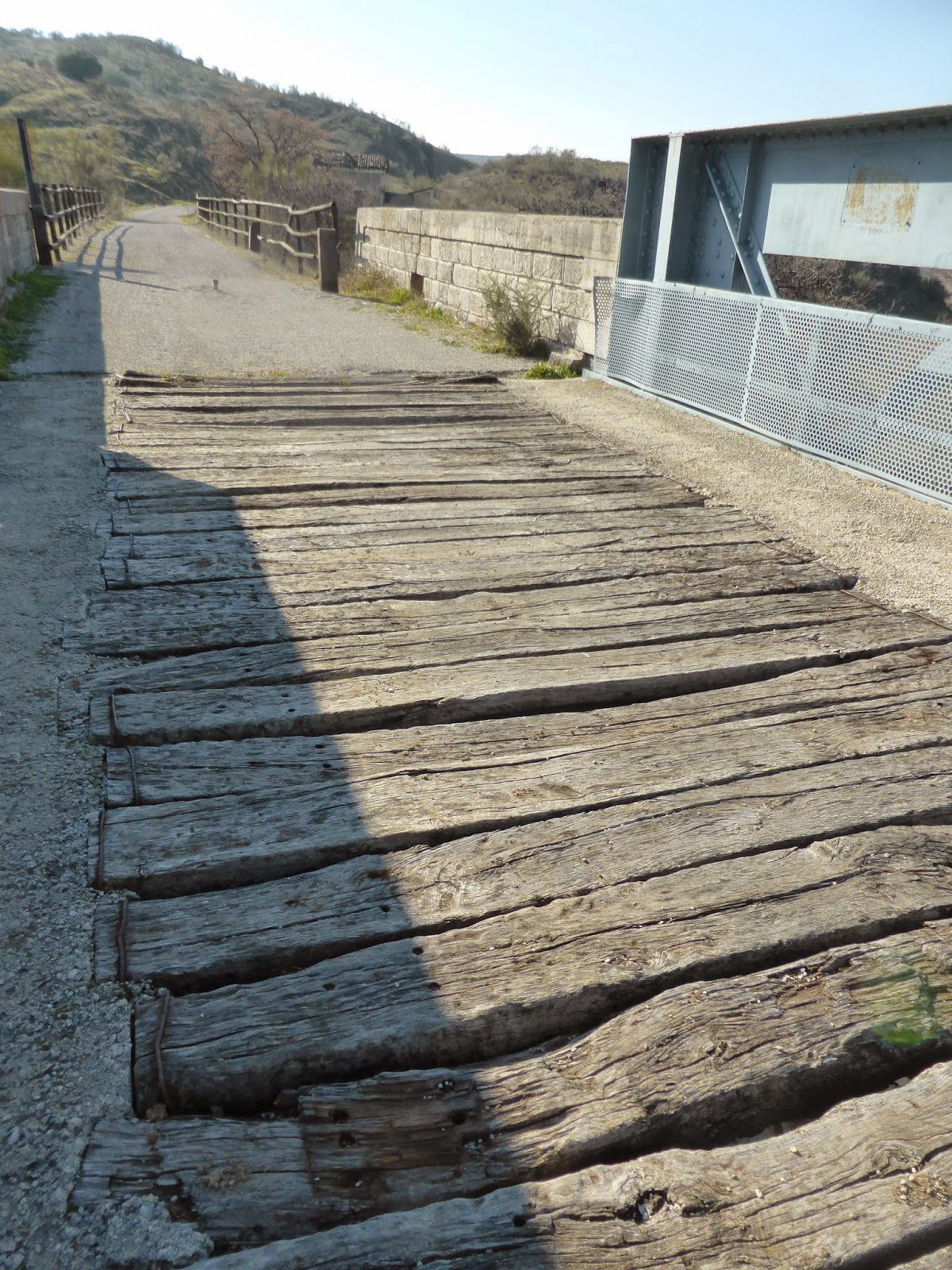 The bed of the viaduct is constructed of the old railway sleepers, with minute gaps between the weathered timbers that shows the valley some 100 feet below...I walked along the edge 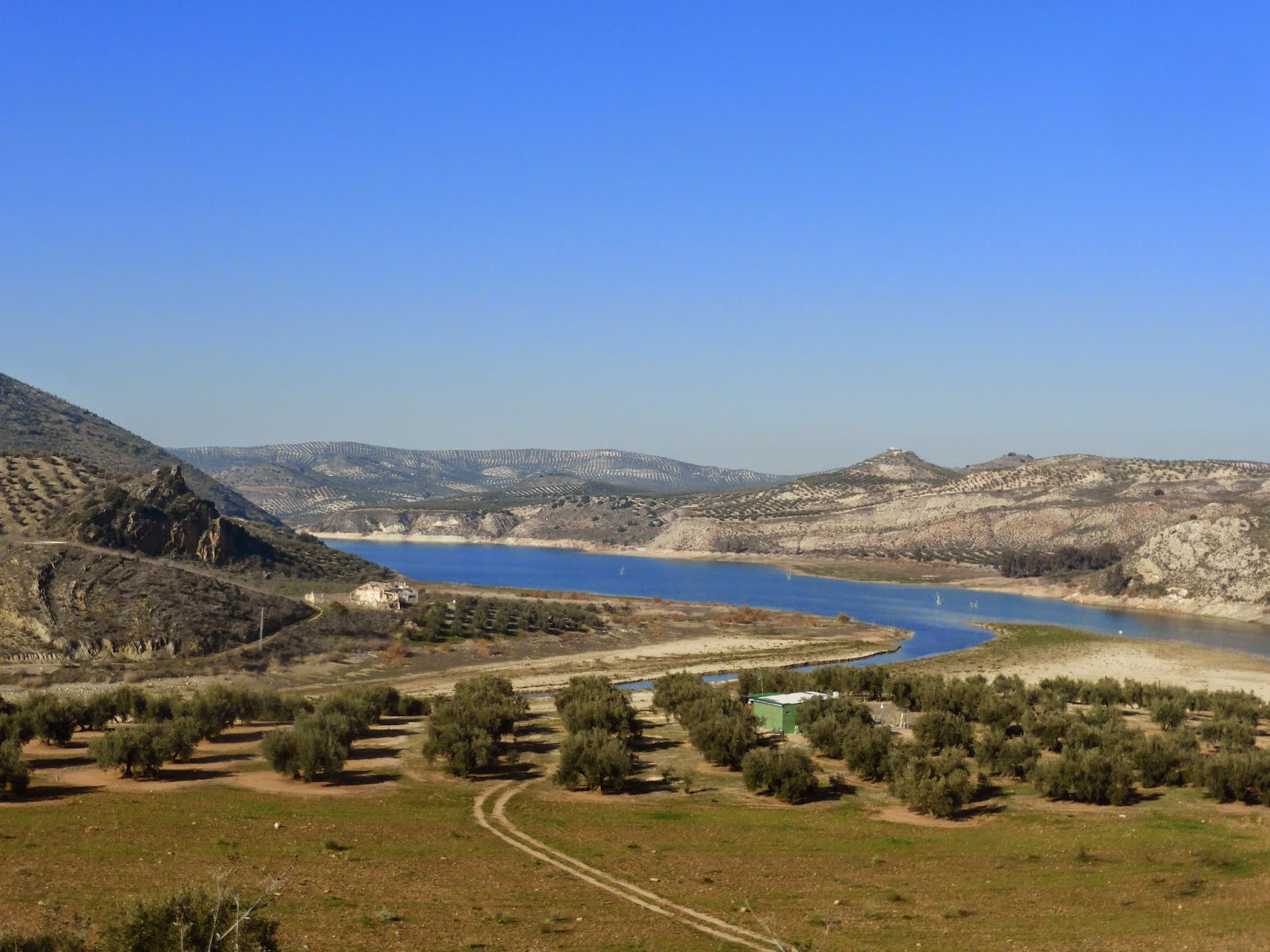 The Rio Guadojoz feeds into this laguna (lake.)  We stopped here for our picnic lunch before turning and retracing our steps back to the car. 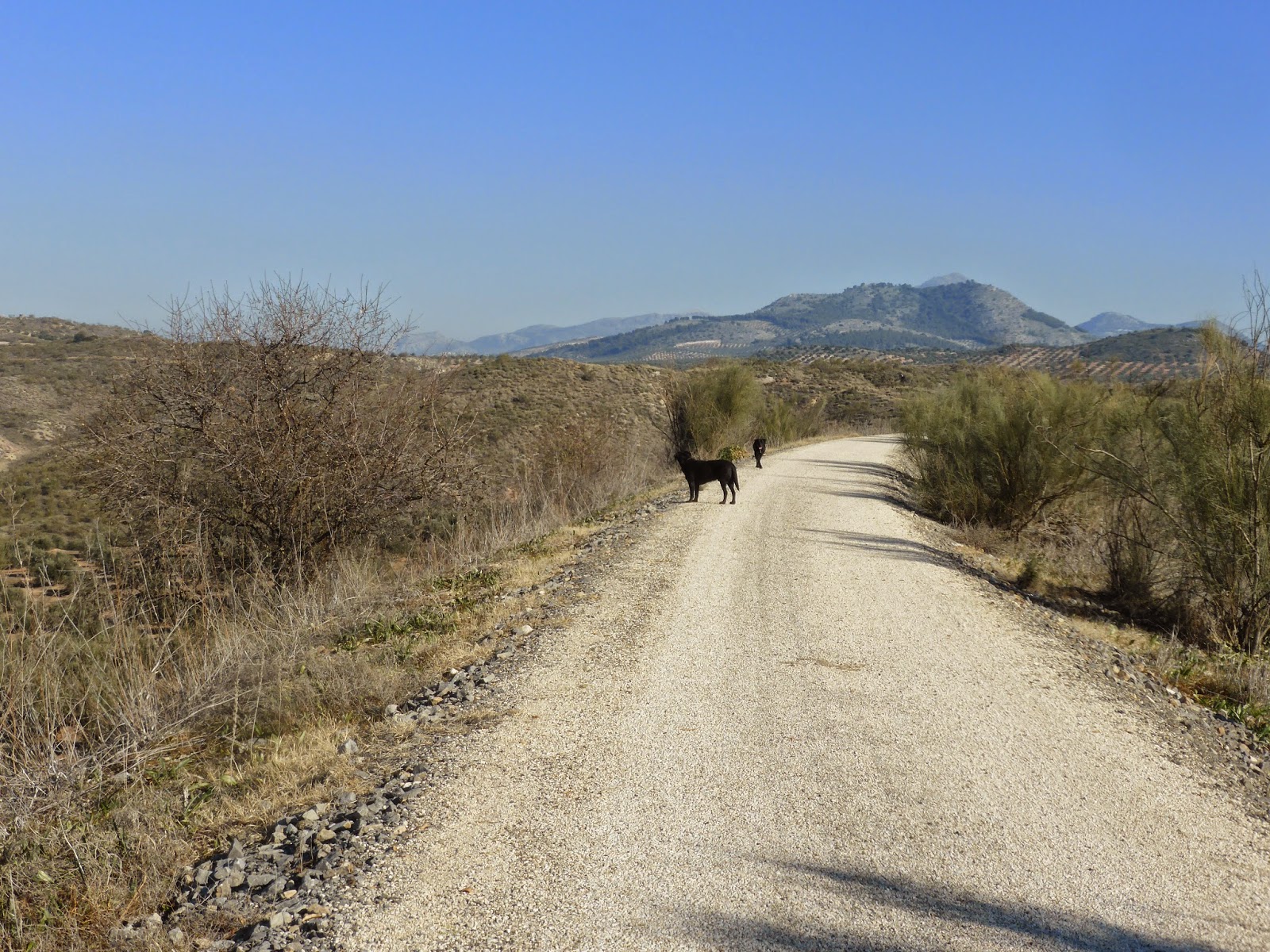 Another lovely sunny day, we really are being blessed this winter, so we took the dogs and ourselves off to a local lake on the Rio de Colomera.  The village clings to a steep slope that is studded with olive trees and the road drops down past the villas to the lake.  We parked up and headed for the lake shore. 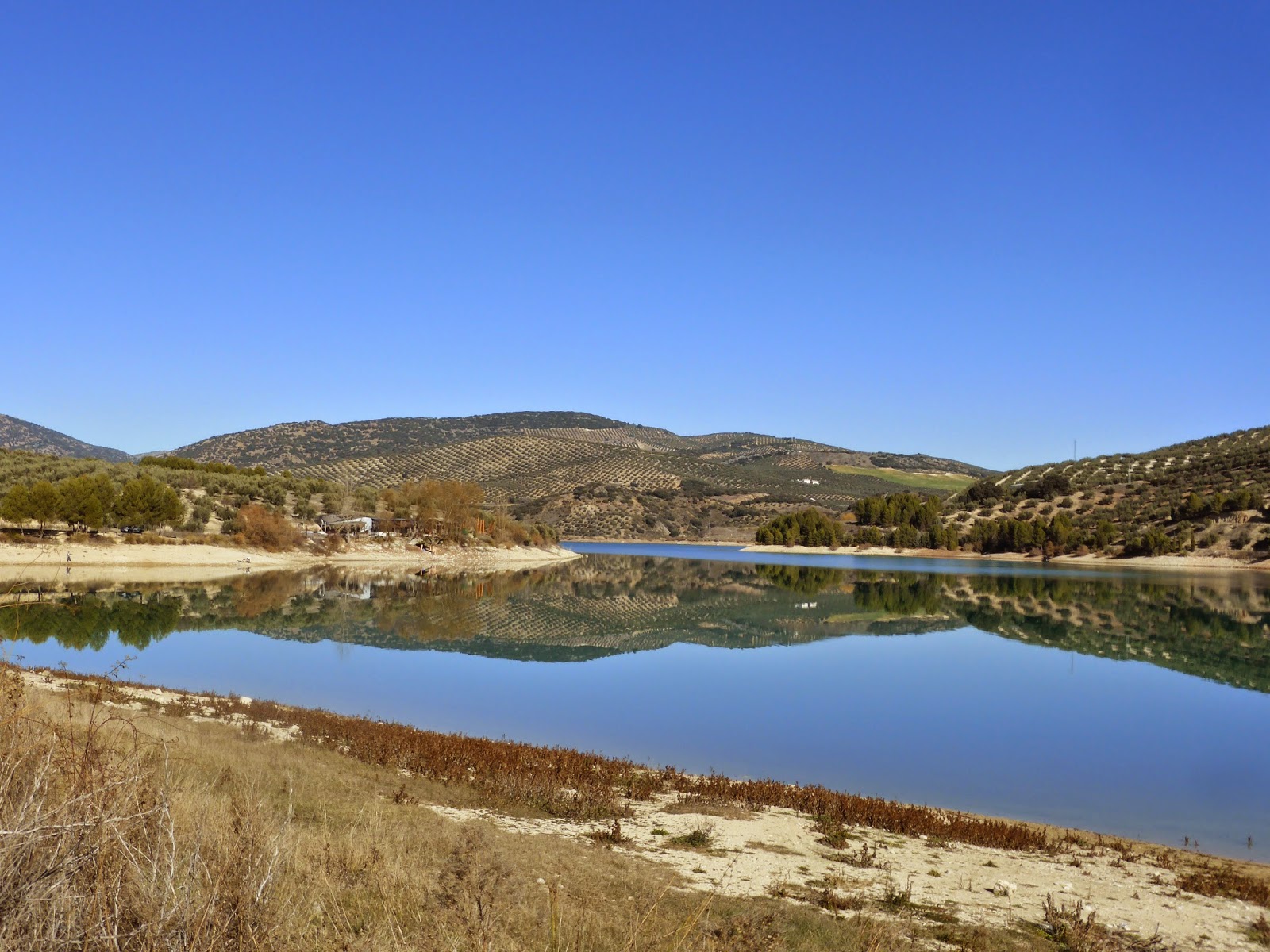 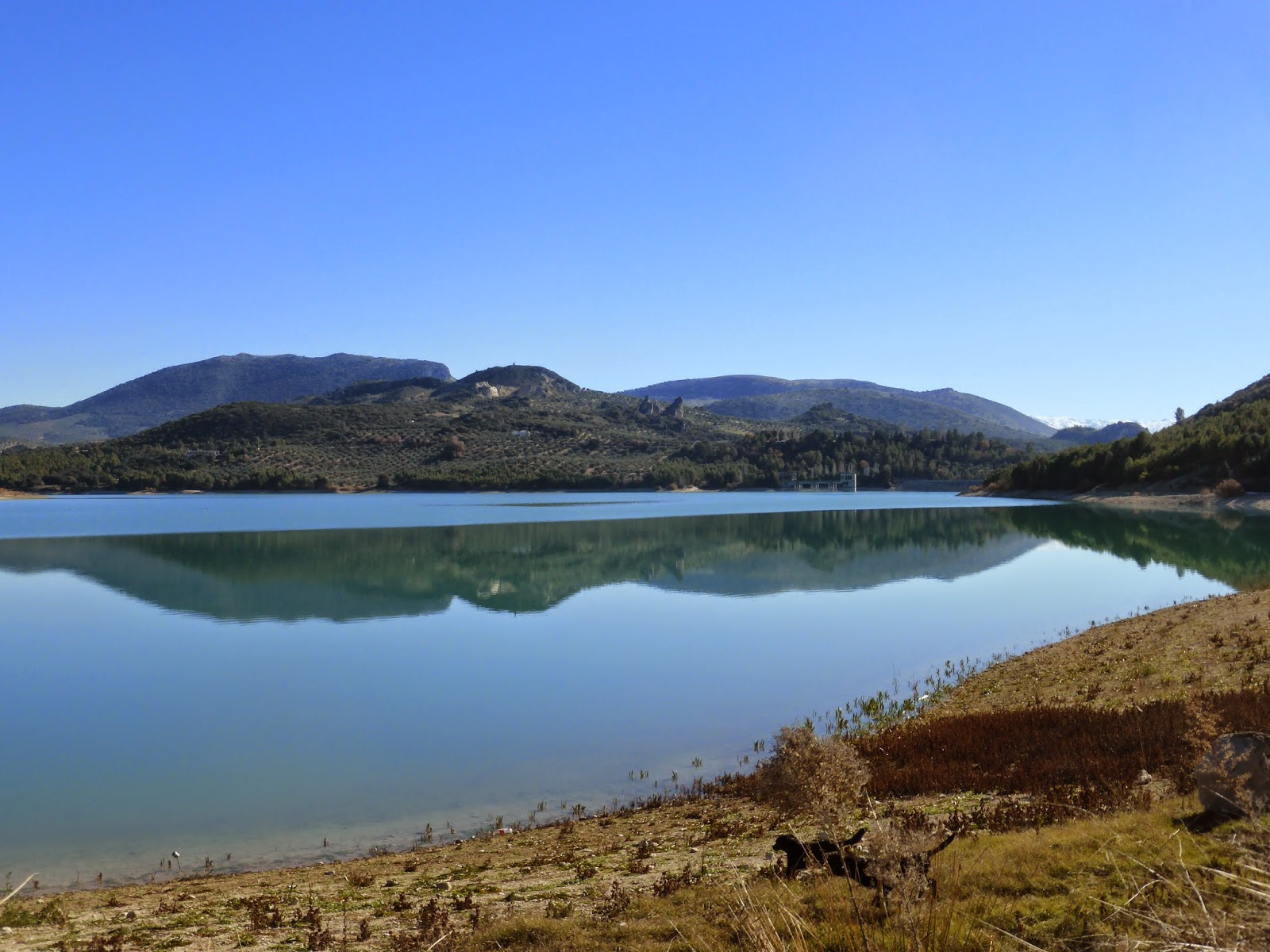 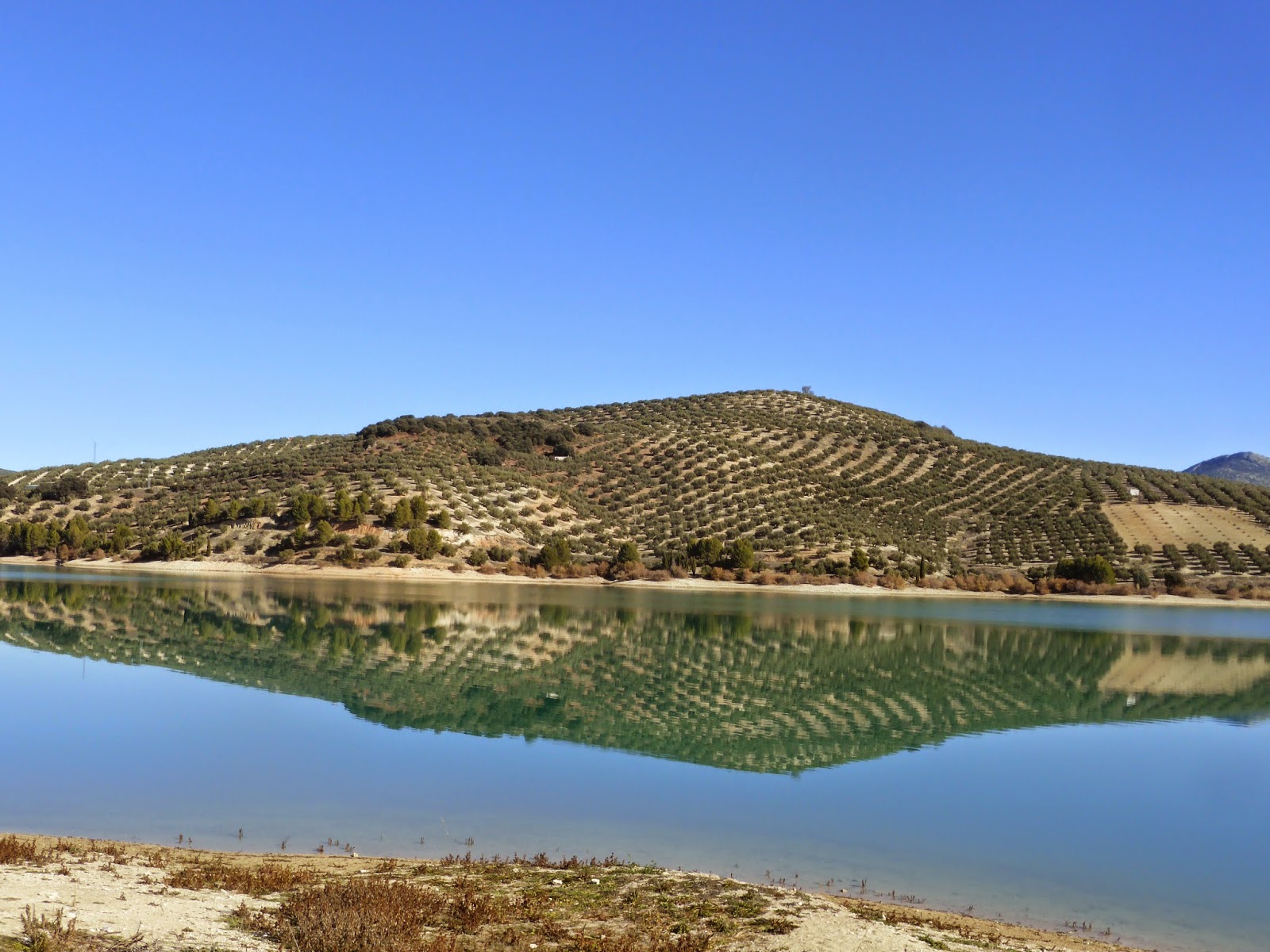 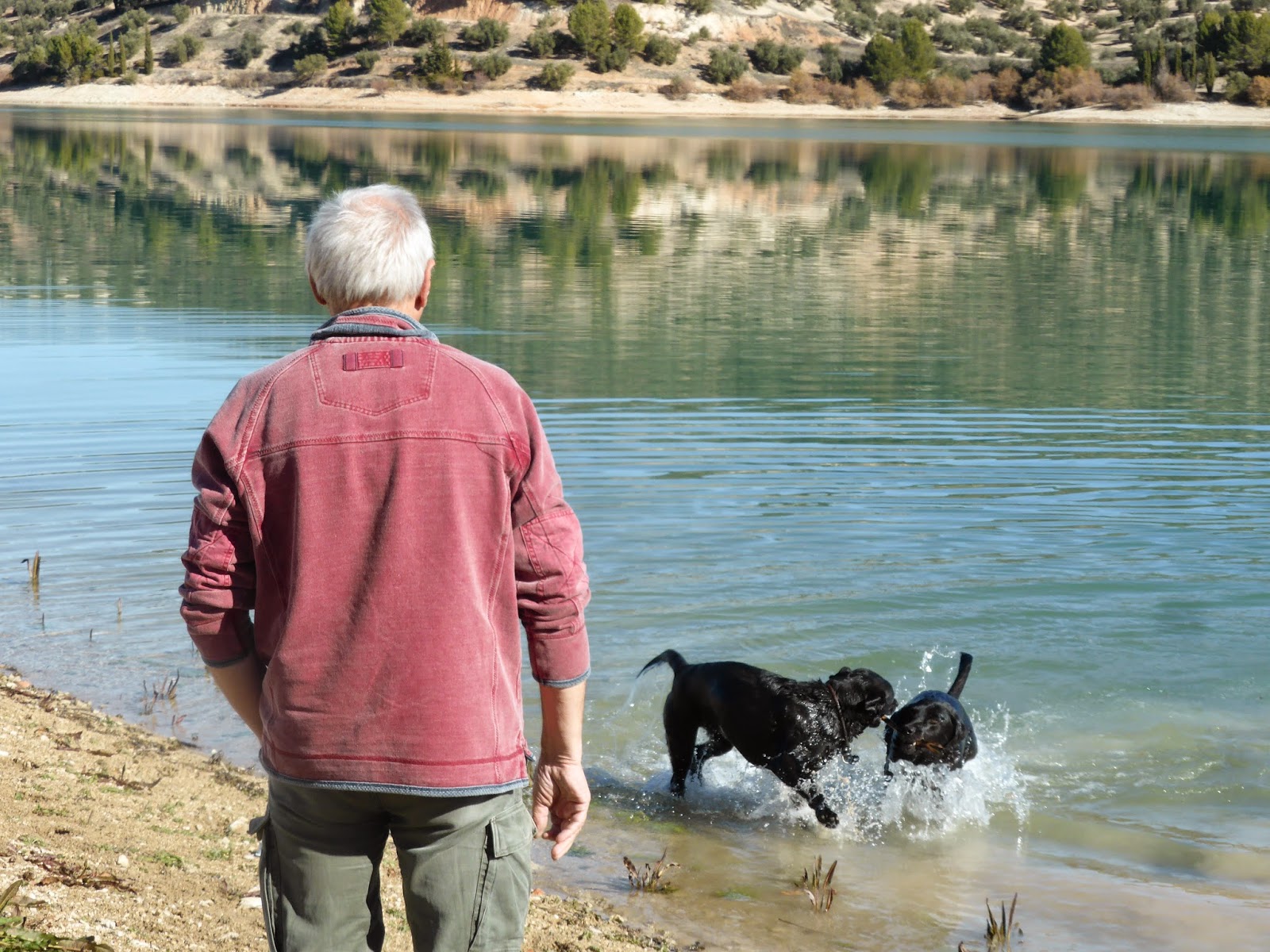 We found a couple of sticks and in moments it was PLAY TIME! 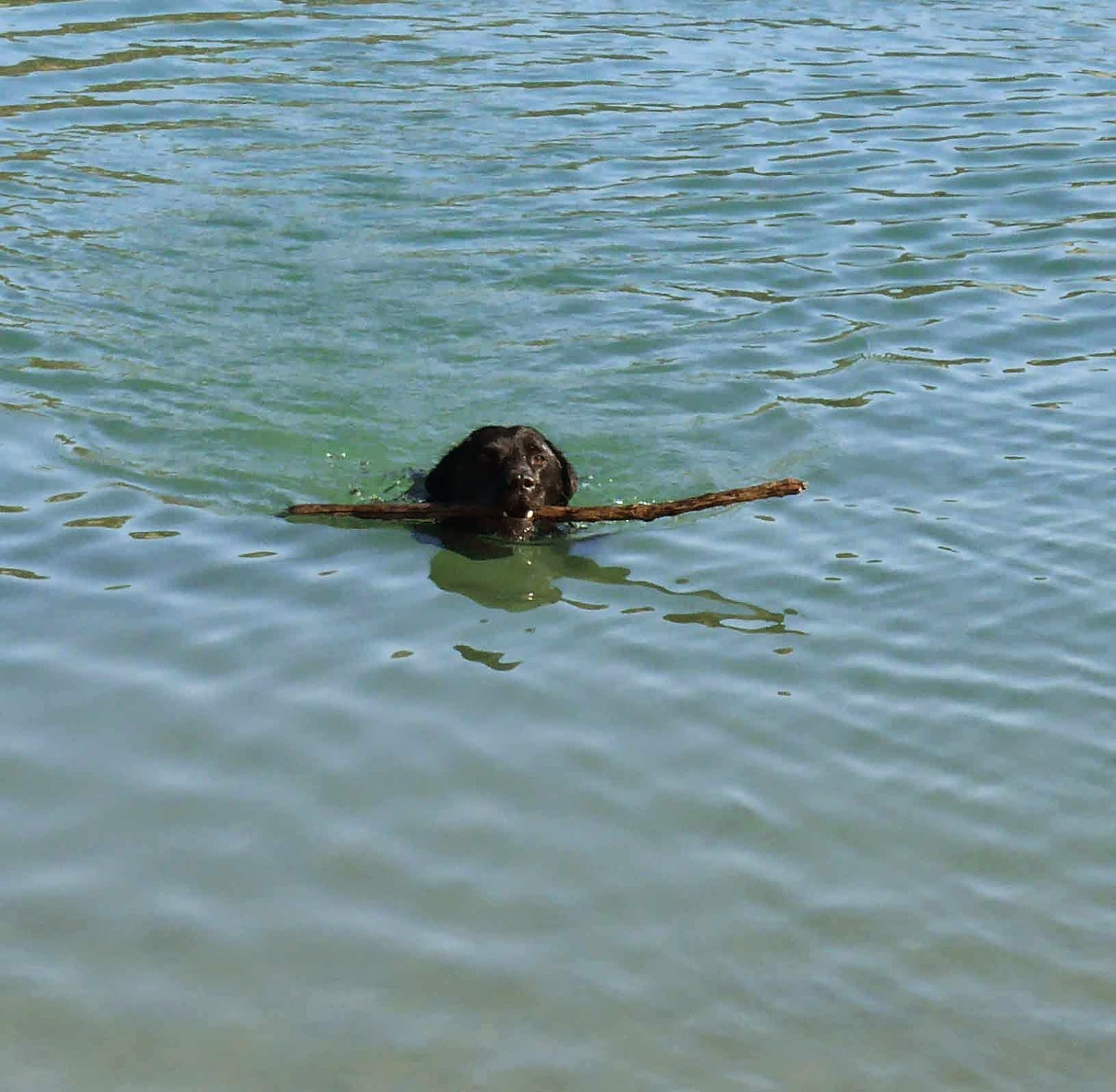 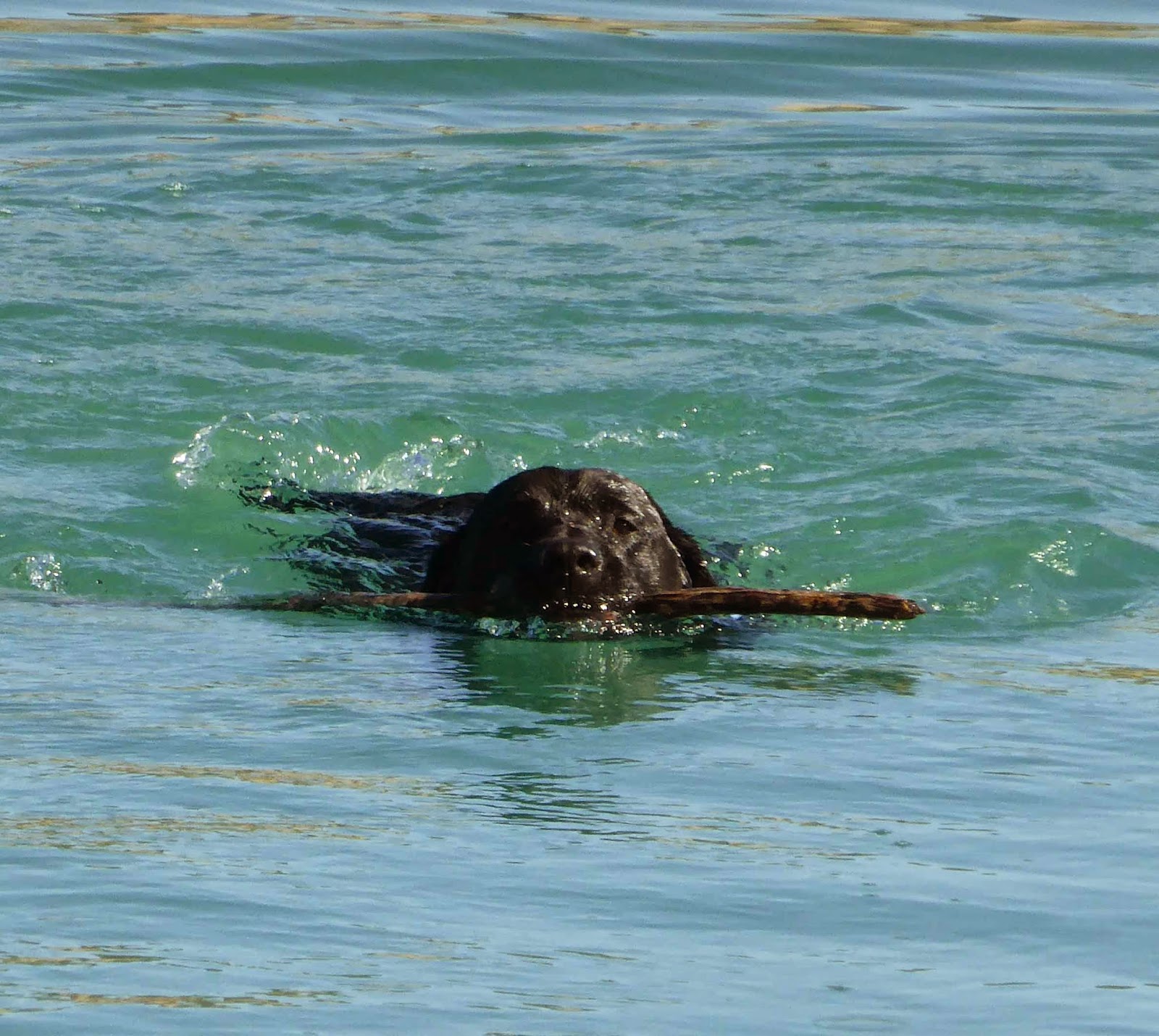 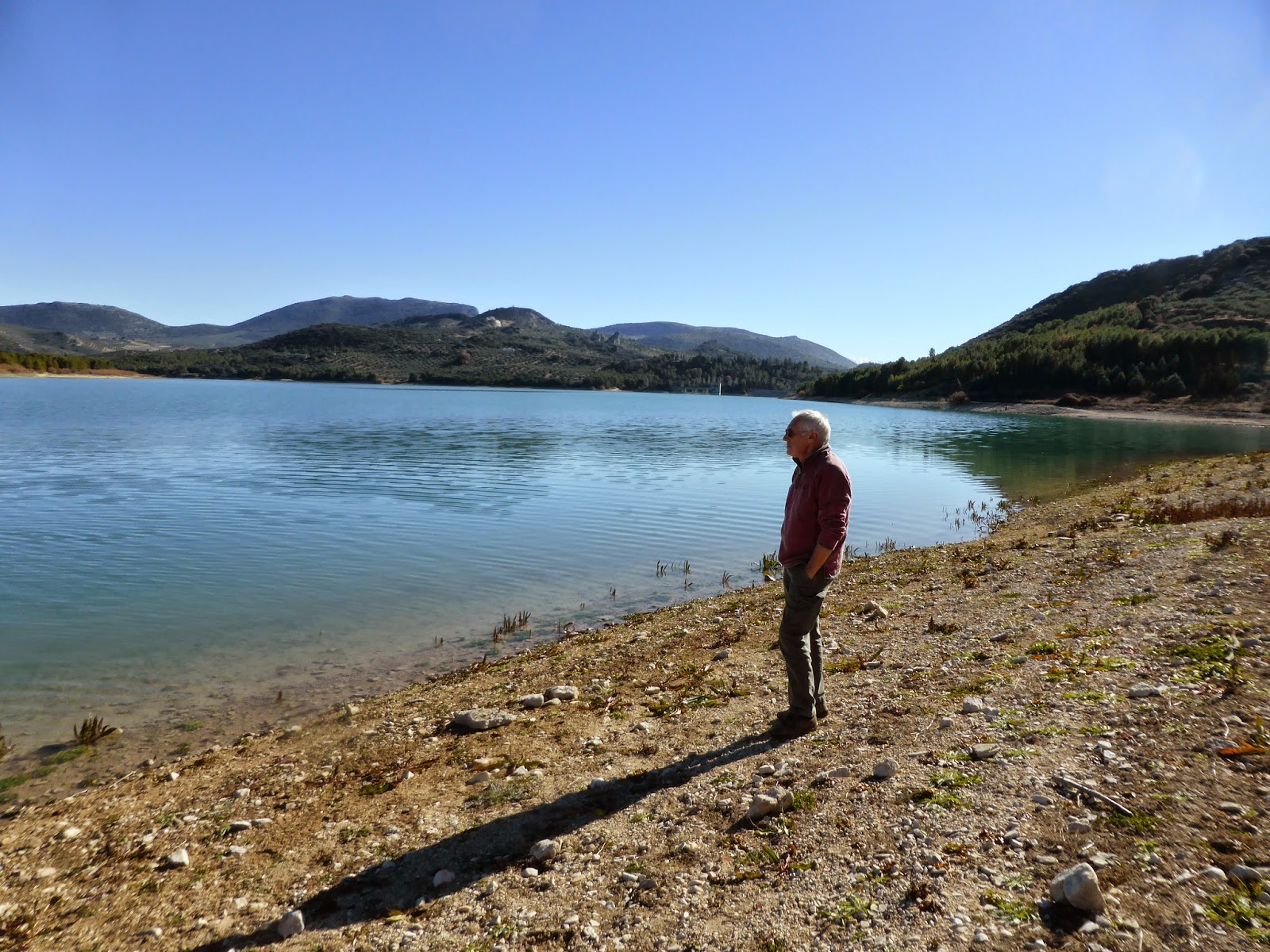 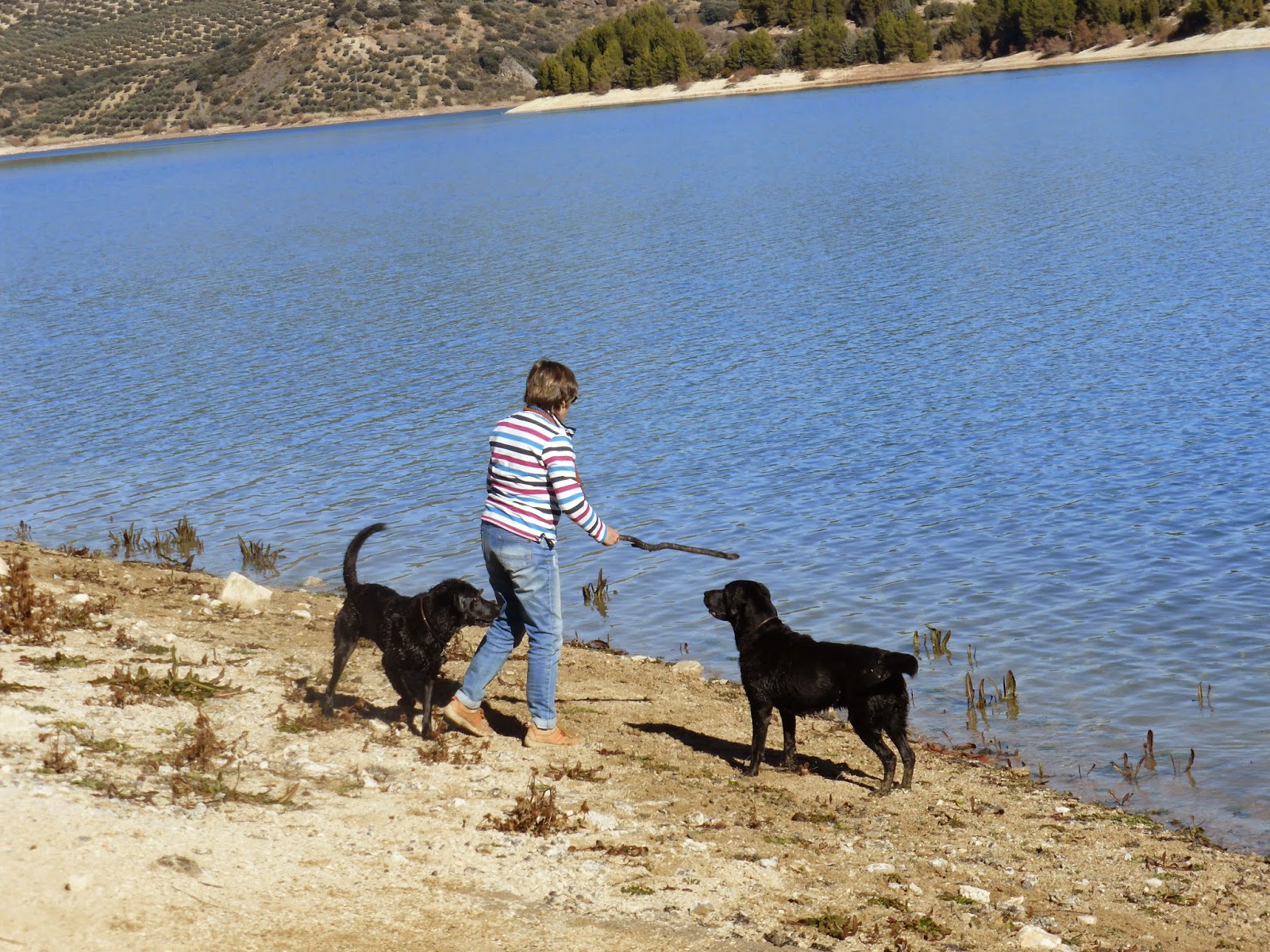 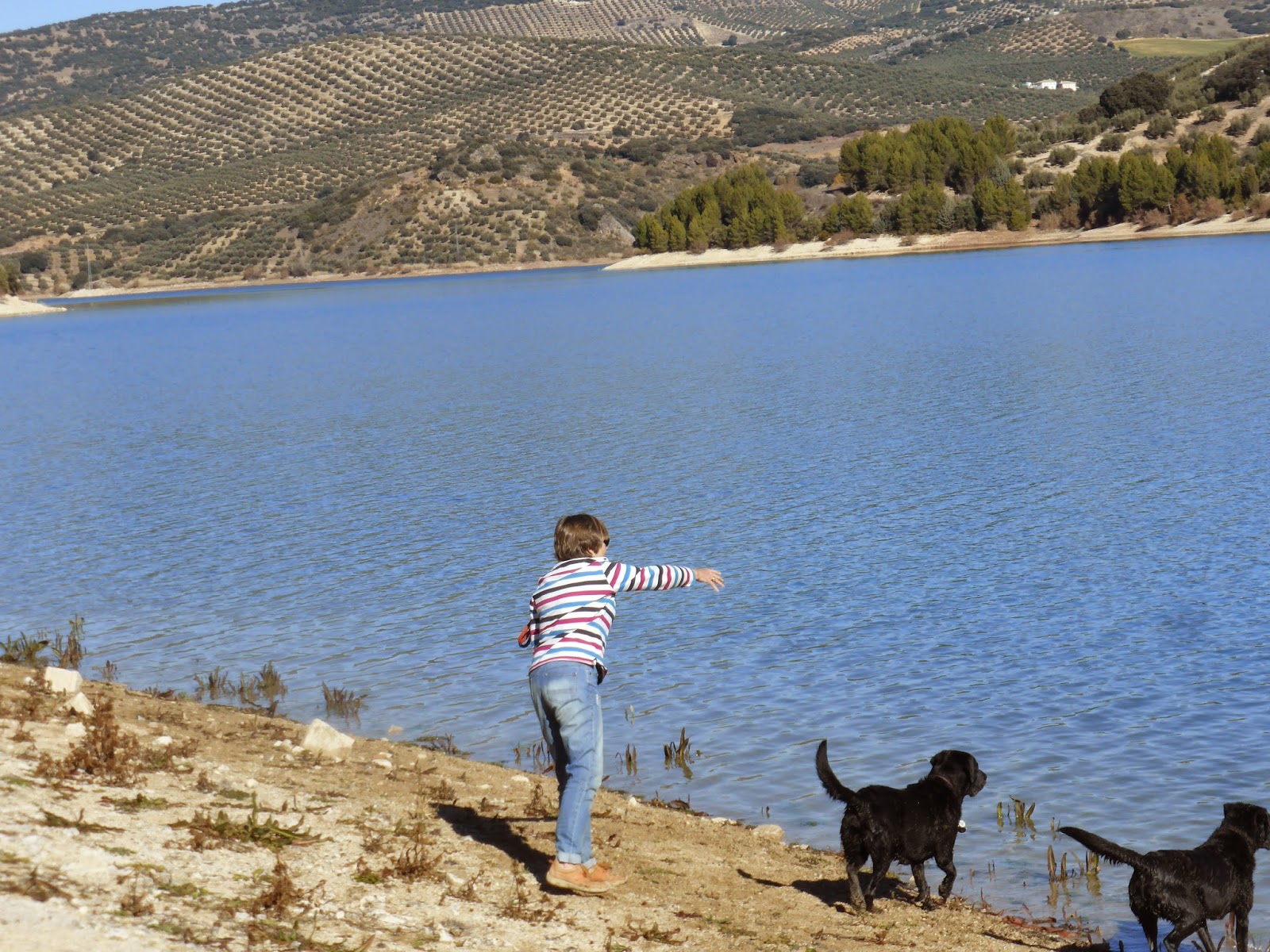 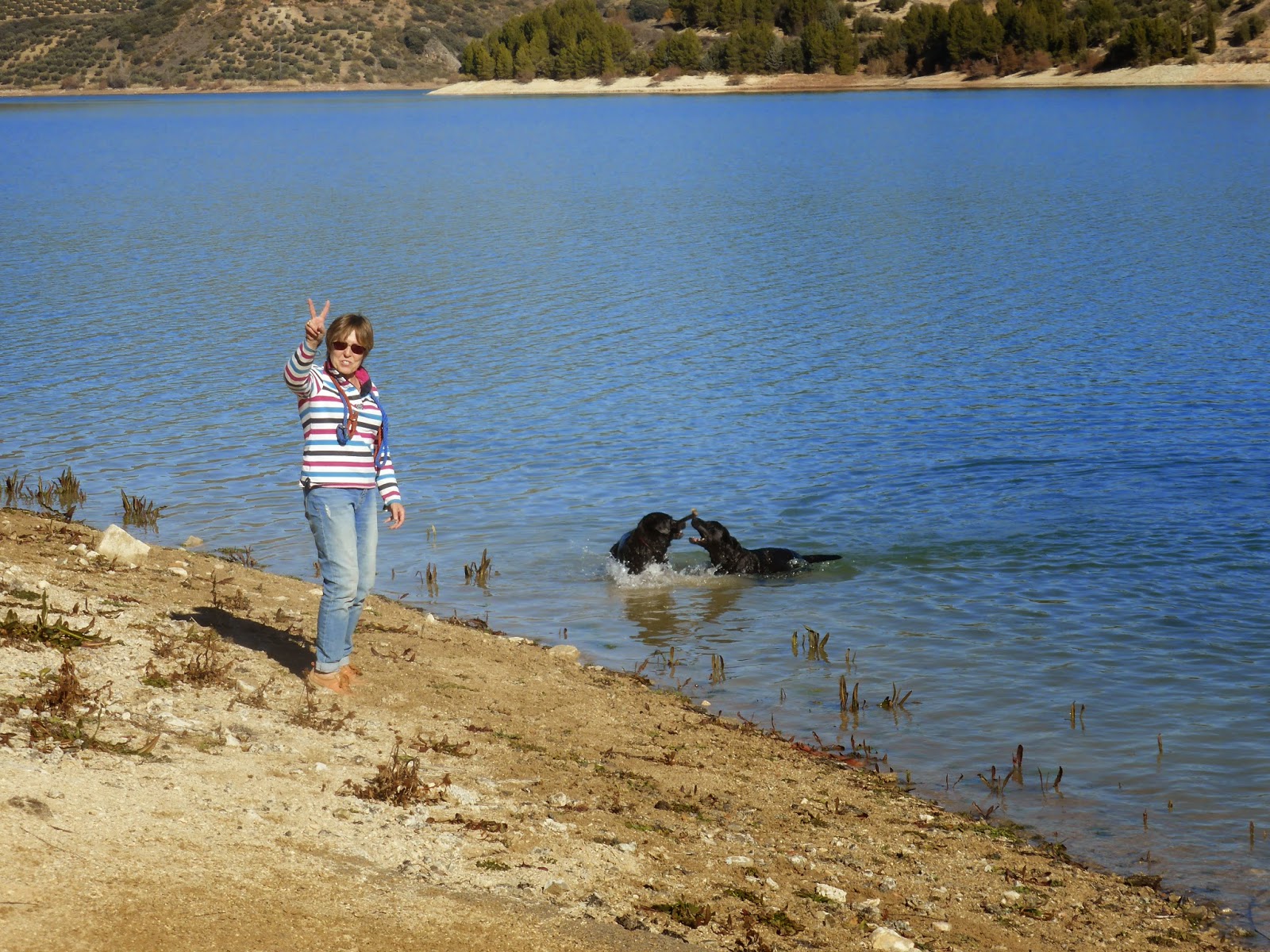 And, that is ...two sticks brought back, despite what you may think
We stayed about an hour, the dogs were exhausted and dust free which was a bonus so we loaded them back in the car and headed back to base where we sat outside in the sun, dried the boys and had a beer, or two.
Posted by Nb Yarwood at 17:16 4 comments:

Twenty plus degrees today, major p*** off for some so forgive me please.  We ere going to have a look around Jaen (pronounced Hay - en) but the weather was so good we headed back the Vias verde  - green way, we found last Sunday for a walk and a picnic. 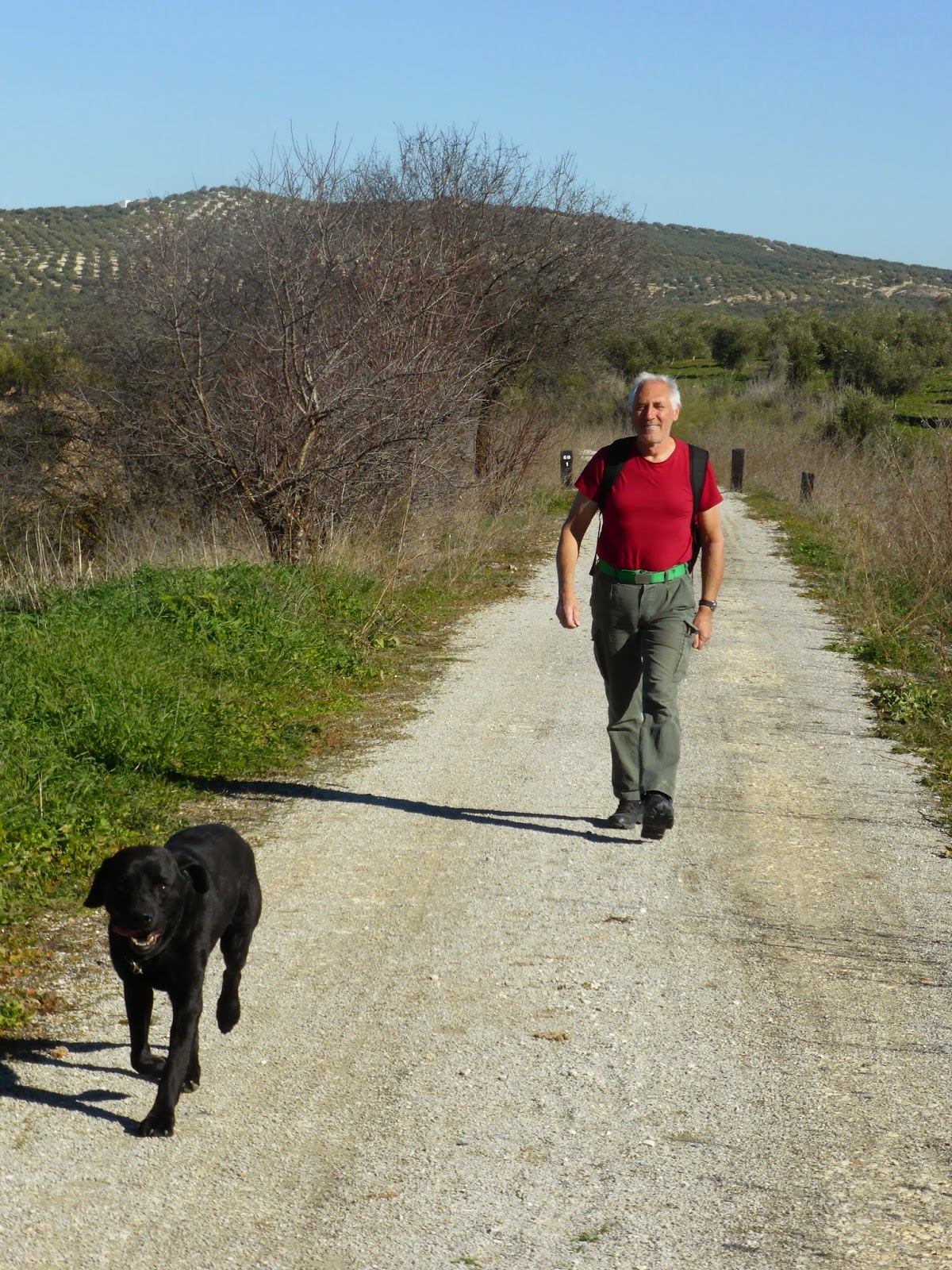 Sweatshirt shed and in rucksack after five minutes walking and a smile on Joe's face... 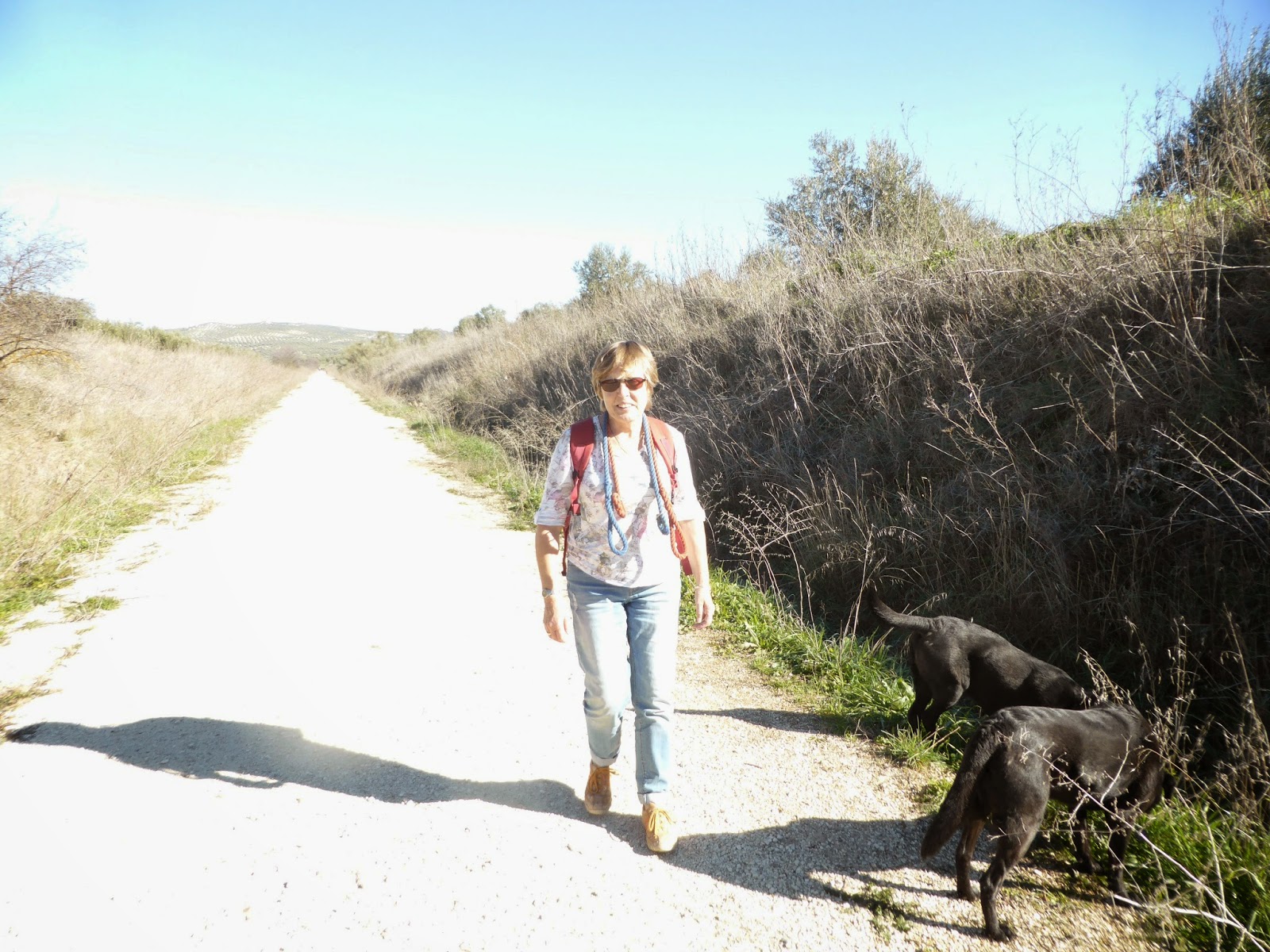 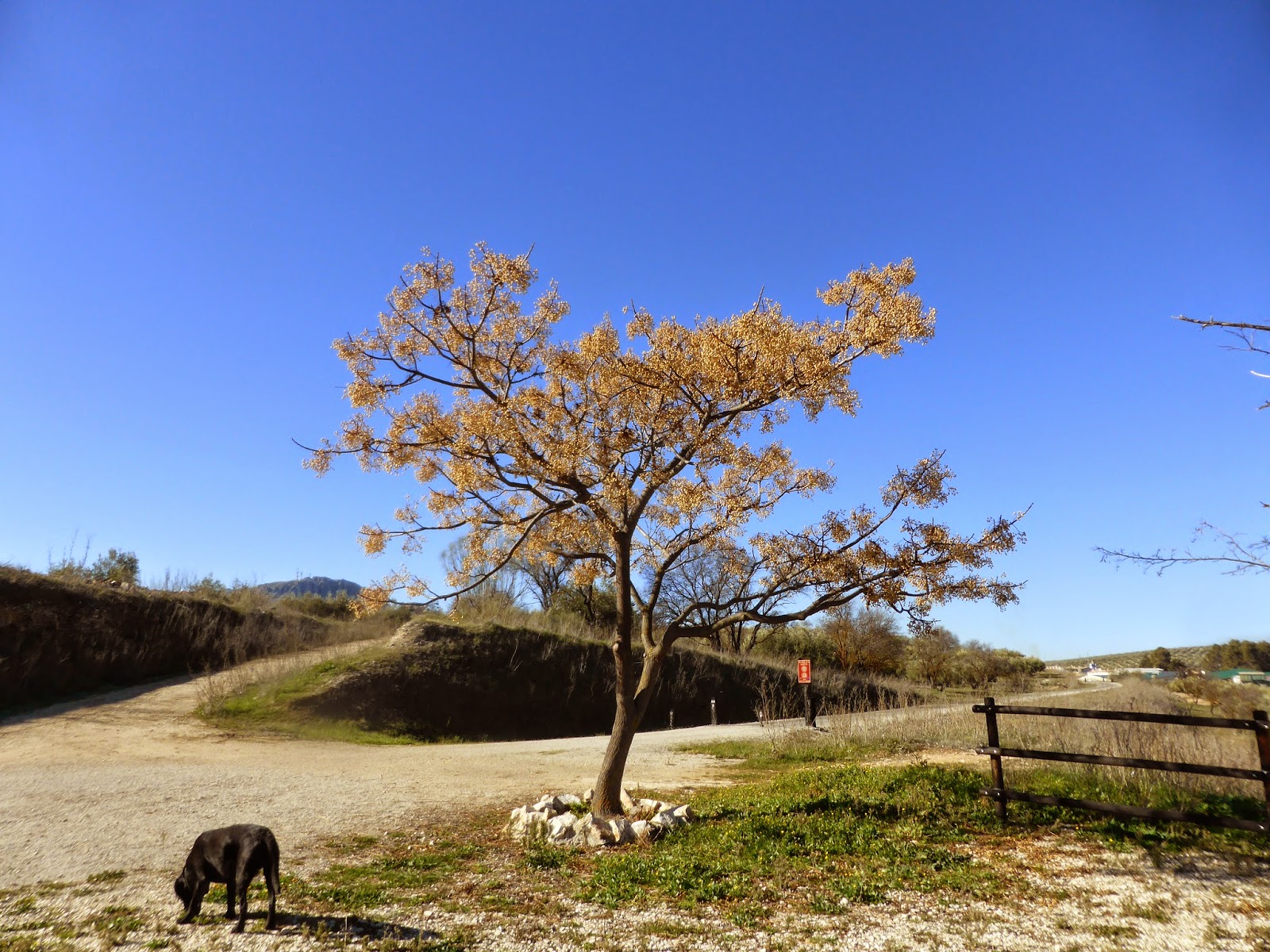 I believe this is an acacia tree 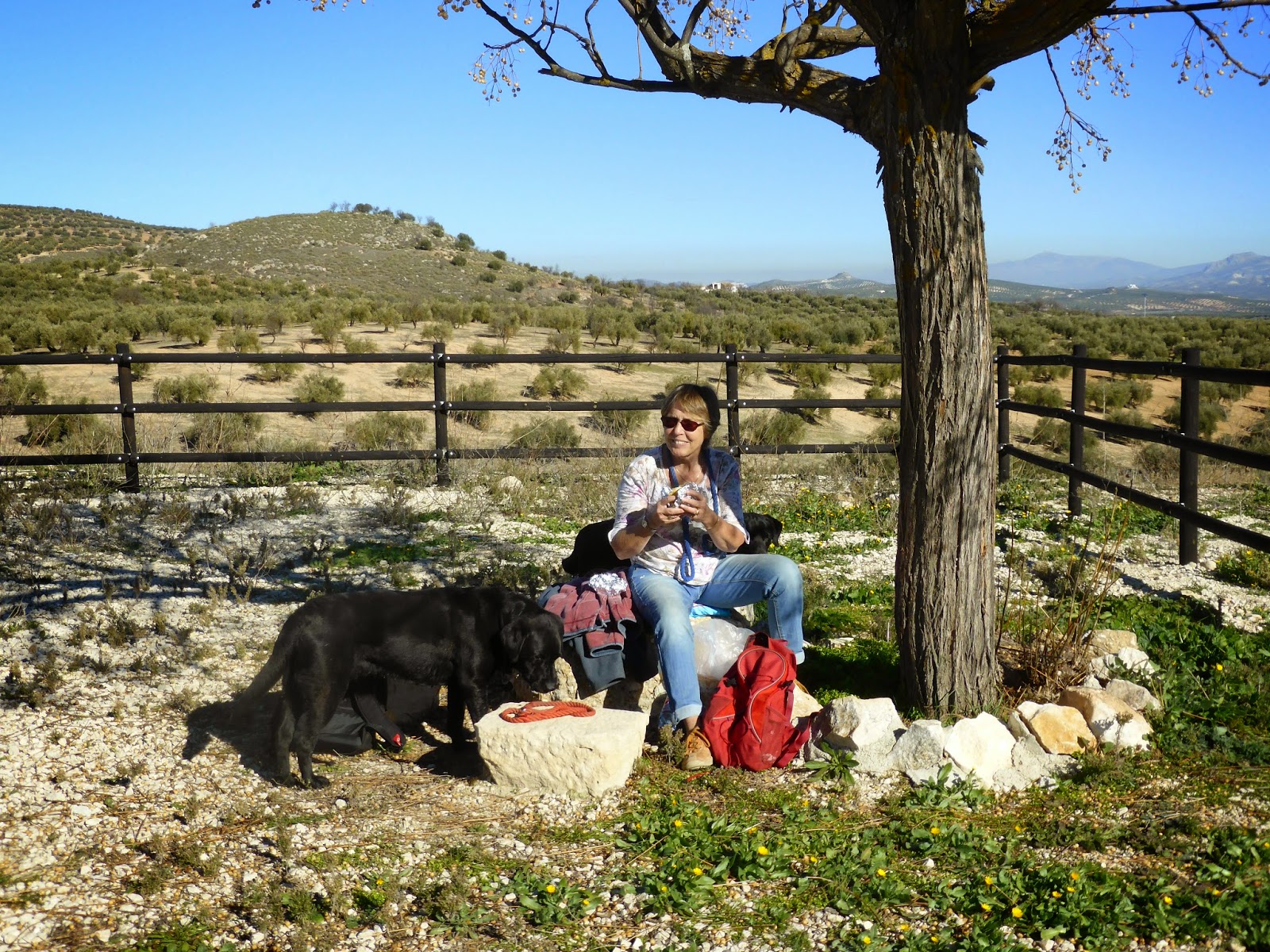 Acacia tree, a good spot for a picnic 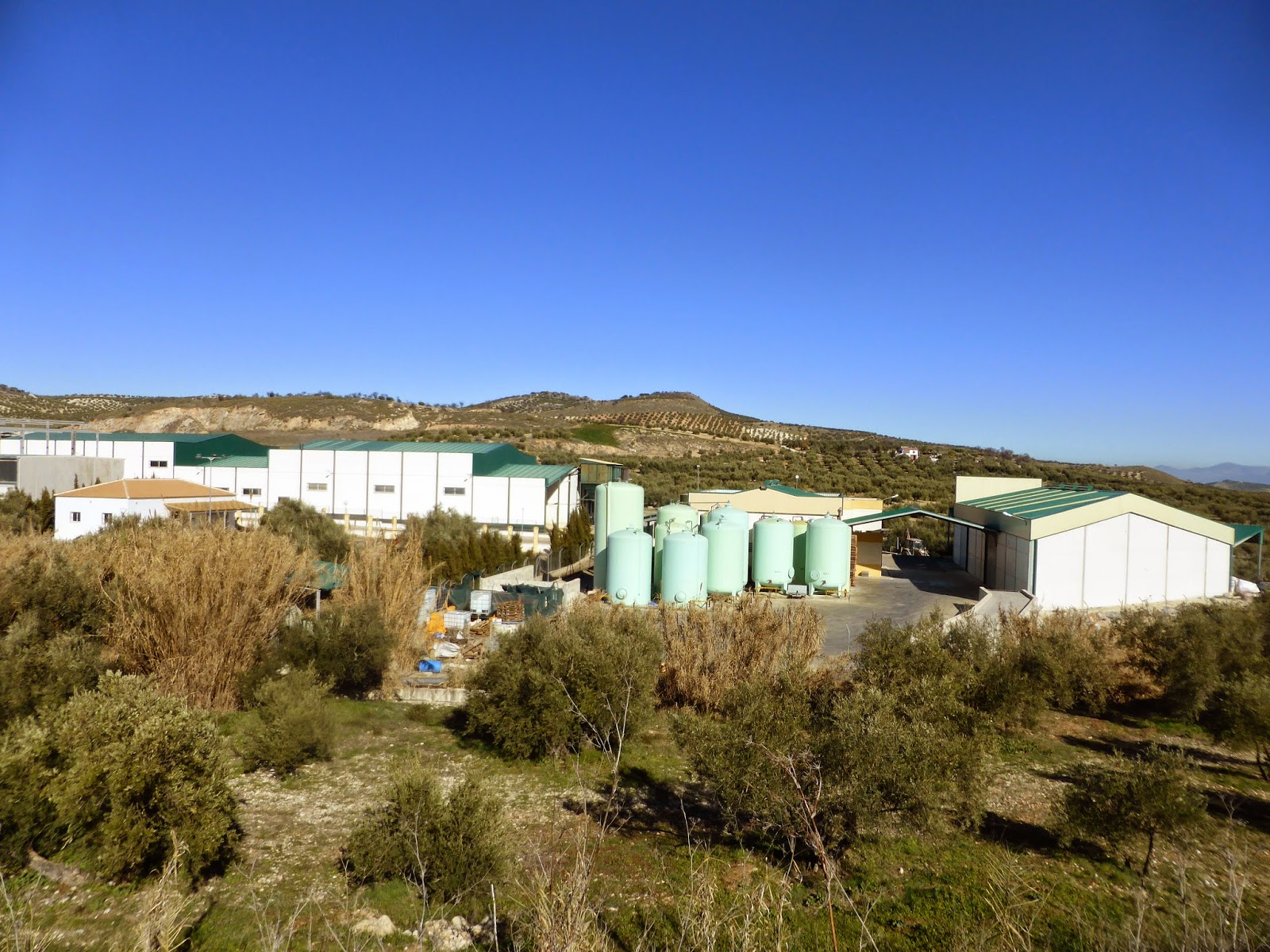 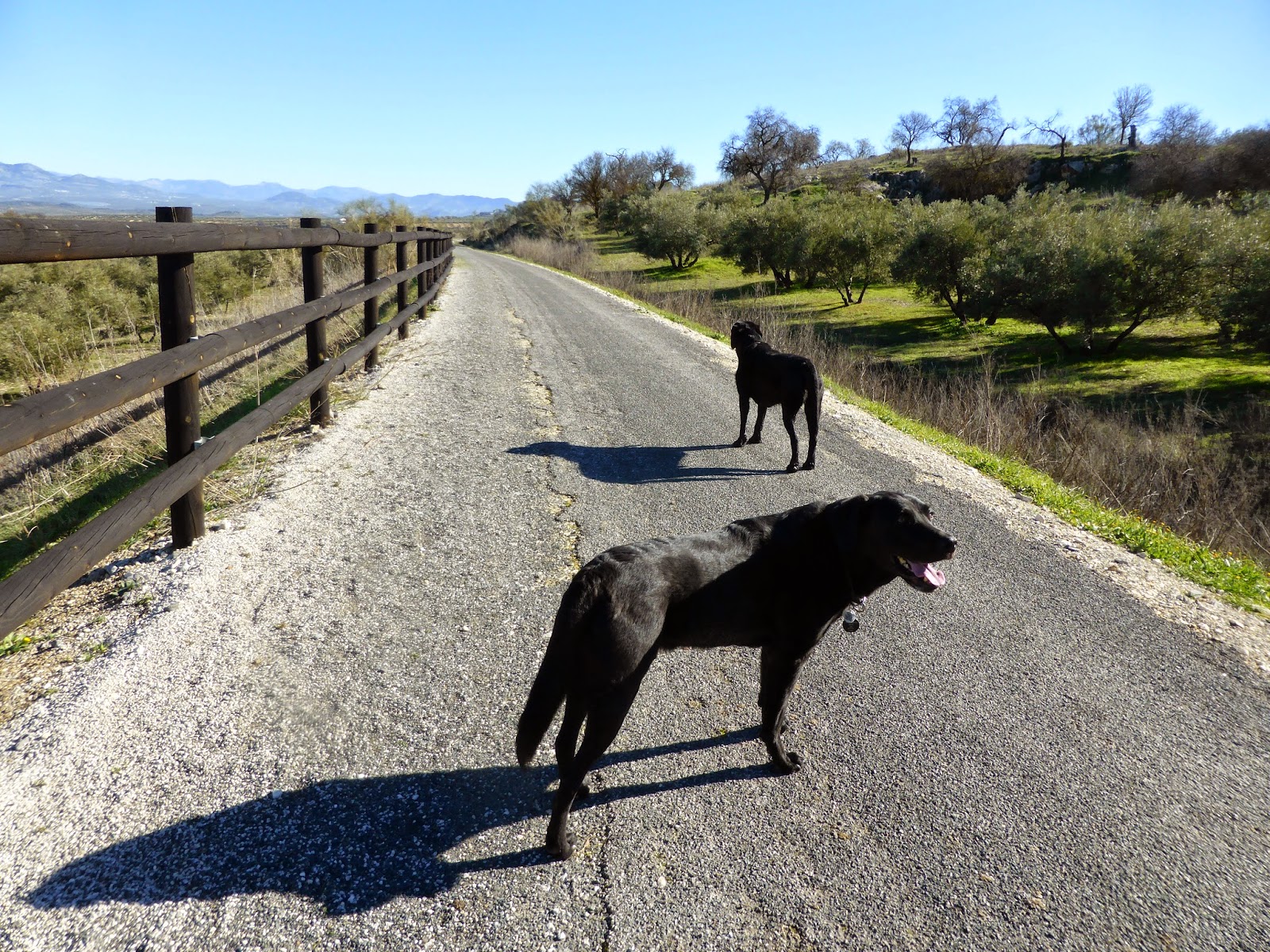 Heading back to the car
Posted by Nb Yarwood at 17:46 No comments: 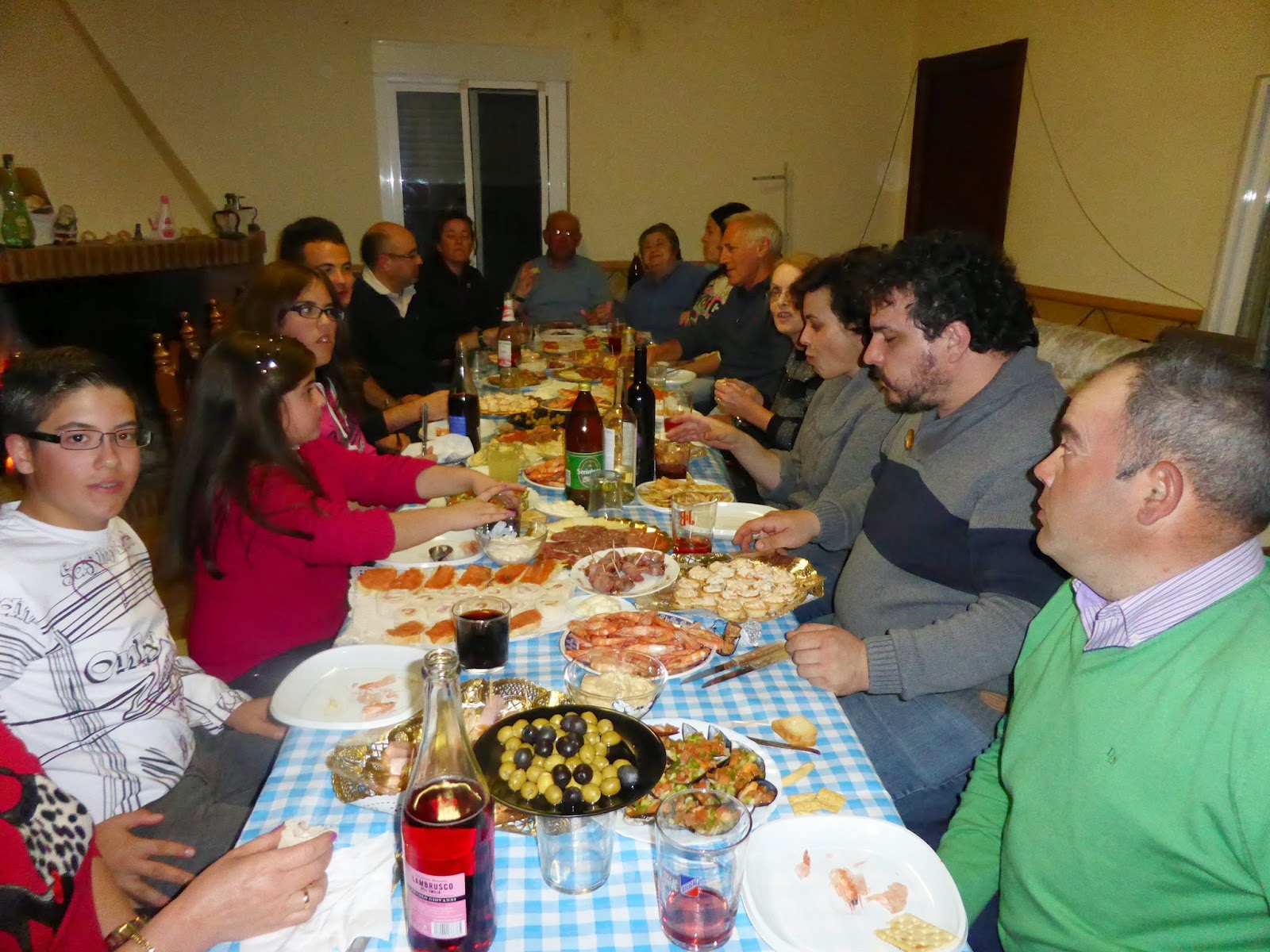 New Year feast Spanish style
New Year's eve we were invited to join a local Spanish family for their traditional get together.  The extended family were in attendance so tables had been set out the 'tiled garage' and an open wood fire lit in the  corner fireplace to heat the space.  The table was laden with seafood, hams, cheeses, olives, smoked salmon breads and crackers.  After the cold course there was pork cooked with pineapple and the British visitors contribution, curry..
What a priviledge to be invited right into the heart of the family for this shared feast, I hope we managed to convey our gratitude in our snatches of badly pronounced Espanola and their sketchy understanding of English.
Posted by Nb Yarwood at 13:01 7 comments: