Visit to the Vet

Tuesday morning we set off to retrieve the dogs, Fletcher and Floyd, from Norfolk where they have been staying with family while Yarwood was blacked. Our two dogs had been great company for Riley, my brother's young Labrador and he is surely going to miss his canine 'cousins' now they are gone.
Tuesday evening I noticed Floyd mouthing something and then discard it and on closer examination I found it was a tooth or part of a tooth.  Returning to the boat on Wednesday we swung into to Market Harborough and a Vet to get Floyd looked at and the upshot is that he is booked in for a dental operation on Friday....at least four rear teeth had shattered and need removal!  We think that the most likely candidate for causing the damage is walnuts. Floyd developed a taste for them in Spain and was inclined to rummage under any Walnut tree he came across for the nuts.
I gave him a dose of Metacam, an animal pain killer, last night just in case he was suffering. So tomorrow morning early we have to take our 'little man' into Market Harborough and leave him in the tender hands of the Vet.  Poor little man.
Posted by Nb Yarwood at 07:05 4 comments:

Black bottomed and proud of it

Joe and I presented ourselves at Debdale Wharf pretty sharpish this morning as Yarwood was coming out of the shed that she had occupied for the last week and being returned to us and the canal.  After a week in a hotel we were glad to be heading back to our home. 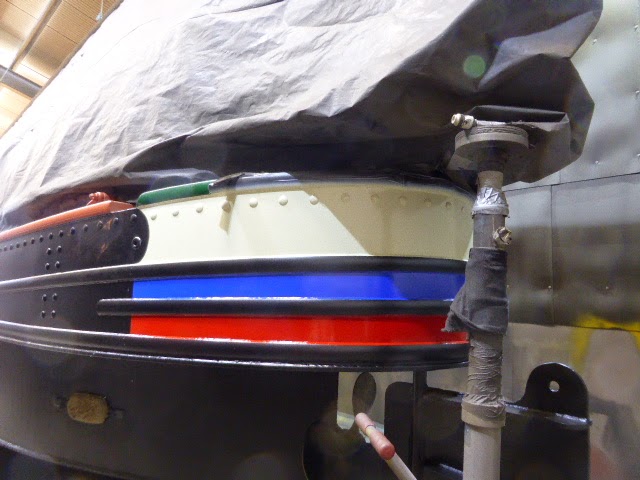 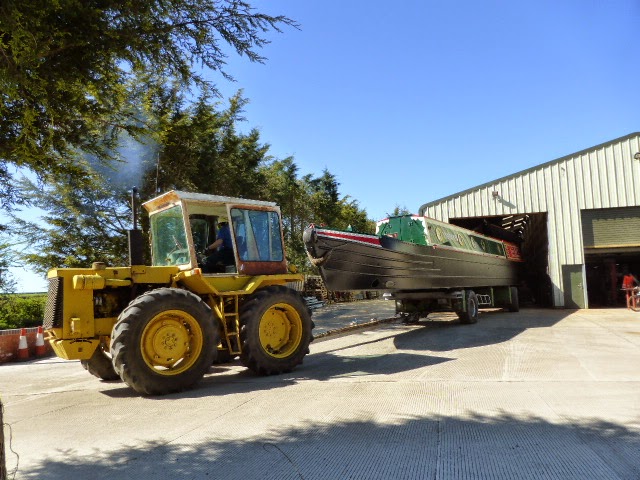 After loading her onto they trailer Mike drags her clear of the shed and reverses her down to the dock and crane. 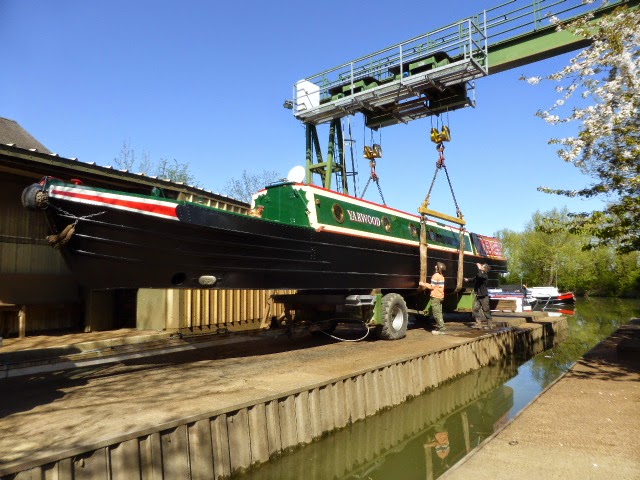 Preparing to lift Yarwood from the trailer..a delicate procedure to ensure they have the balance just right 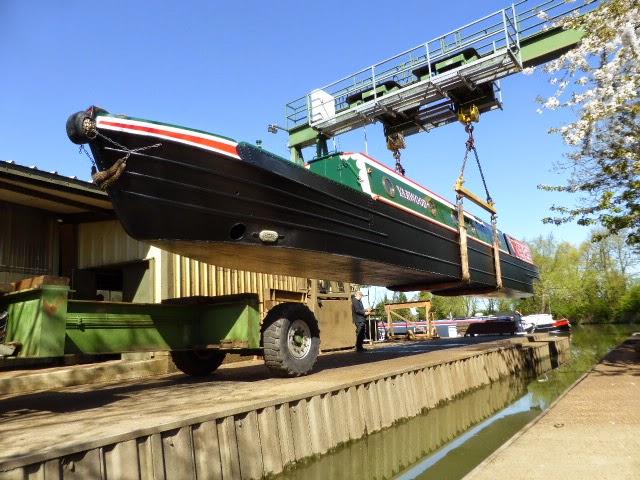 Once suspended the trailer is driven away.  We had the baseplate blacked as well this time. 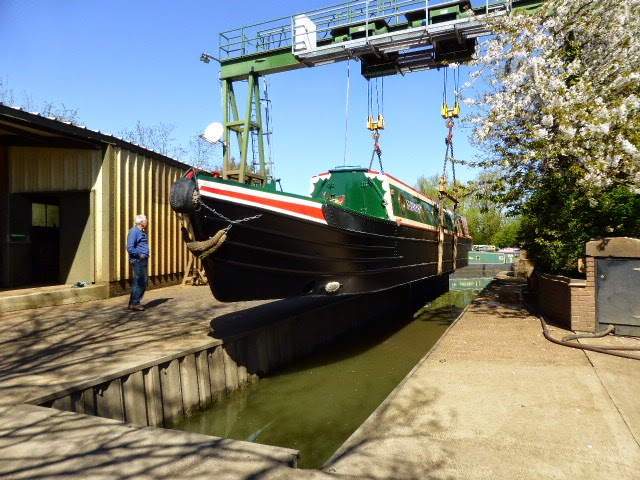 After carefully measuring the area treated on the hull Mike goes off to work out the bill and Yarwood is lowered in the dock. 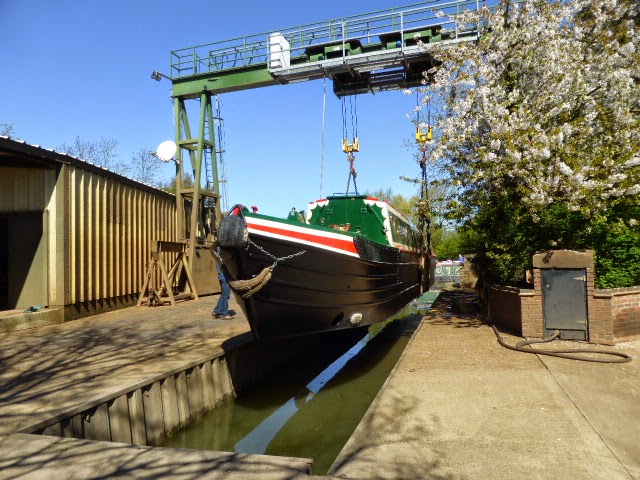 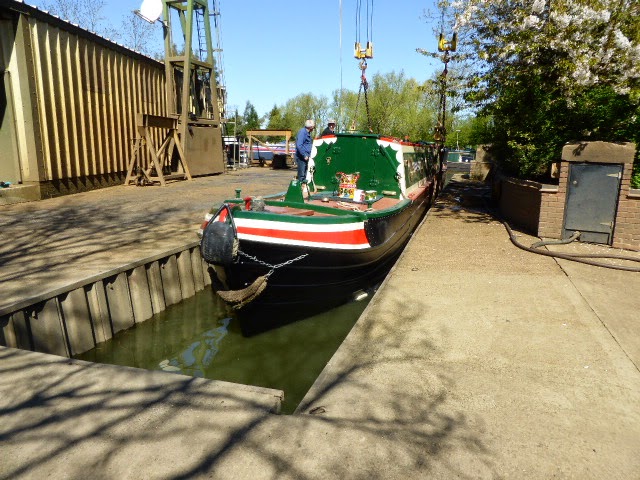 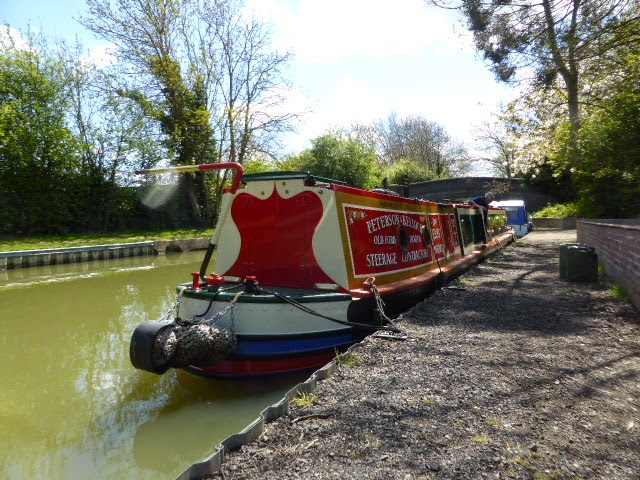 After a quick wash down and our luggage loaded back aboard we paid the bill and headed off to find somewhere to moor up for a few days. 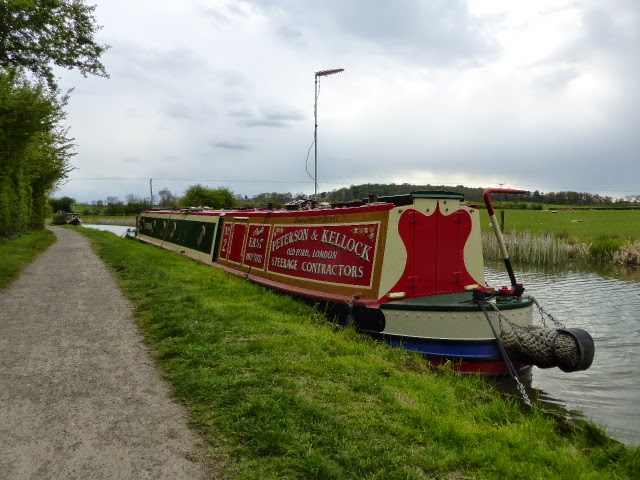 I washed down the other side of the boat so she is ready for a bit of wax in the next few days but first...we are off to retrieve Fletcher and Floyd and get the crew together again.

We arrived back in the UK from our extended stay in Spain about three weeks ago.  We had a couple of weeks staying in Essex with Mother before farming Fletcher and Floyd out to my brother in Norfolk while we dashed up to Yelvertoft and recovered Yarwood.  All this week Yarwood has been at Debdale Wharf where she has been taken out of the water, jet washed and transferred to an enormous shed for a bit of deep cleansing... 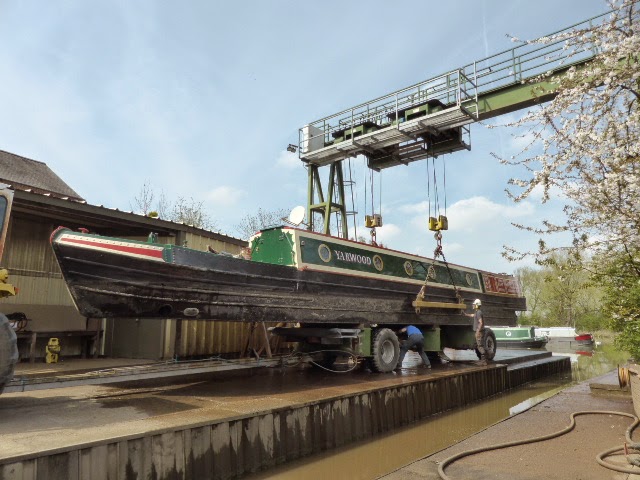 Yarwood after her washing with a powerful jet spray is loaded onto a trailer for transportation to the gritting shed. 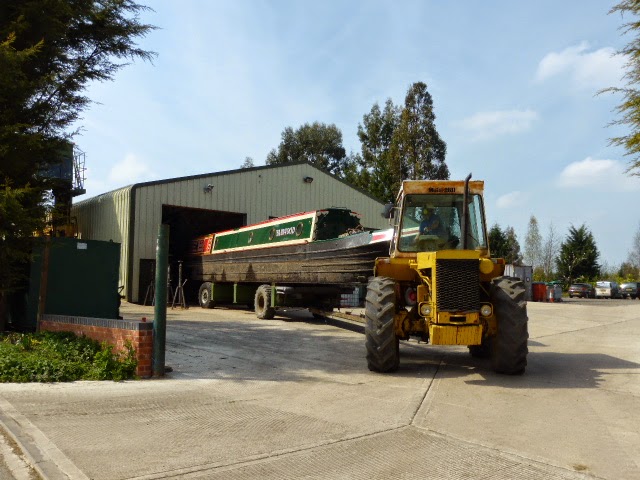 ﻿
Mike carefully reverses  the trailer into the shed 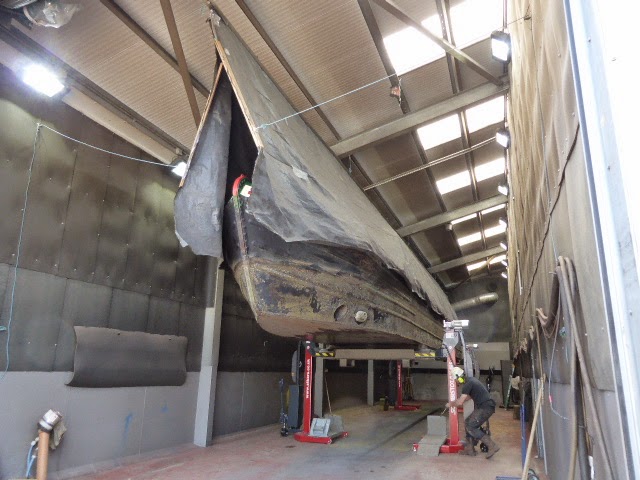 Carefully placed under the tent canopy, four jacks are put in place to take the load and the trailer is carefully removed. At the press of a button Martin lowers the jacks to bring  Yarwood to the optimum height for work to begin. 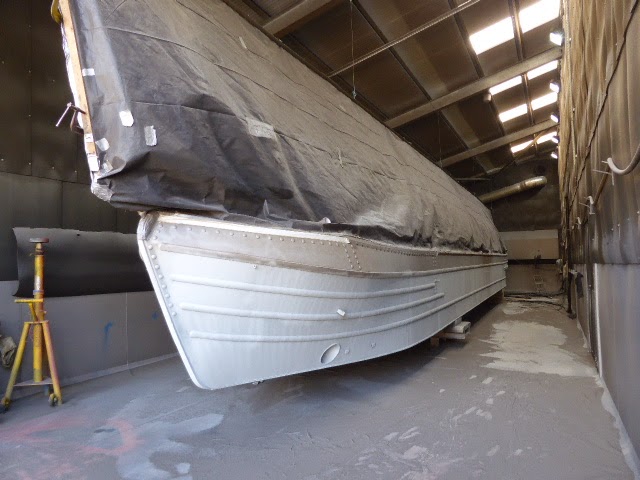 The tented canopy is secured to protect the upper half of Yarwood and then the lower hull is grit blasted to get her back to bare clean steel before a hot coat of molten zinc is applied. 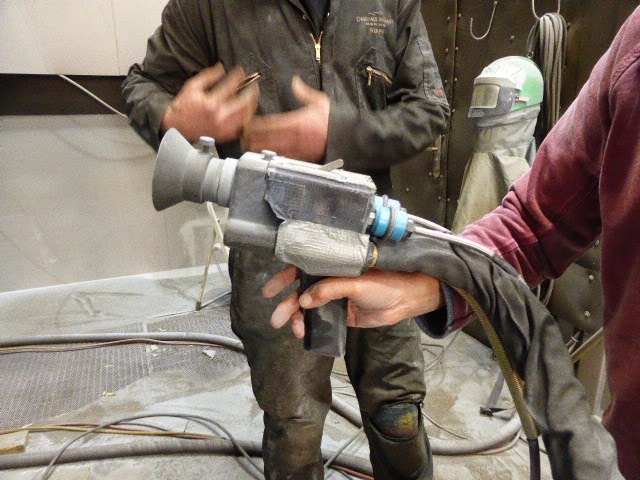 Joe examines the 'gun' that applies the zinc coating 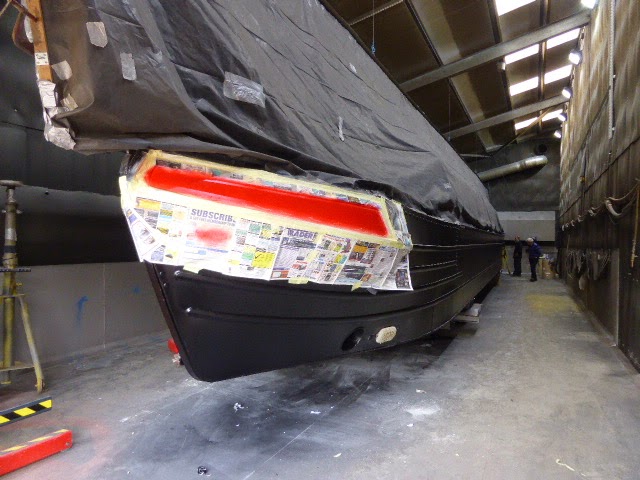 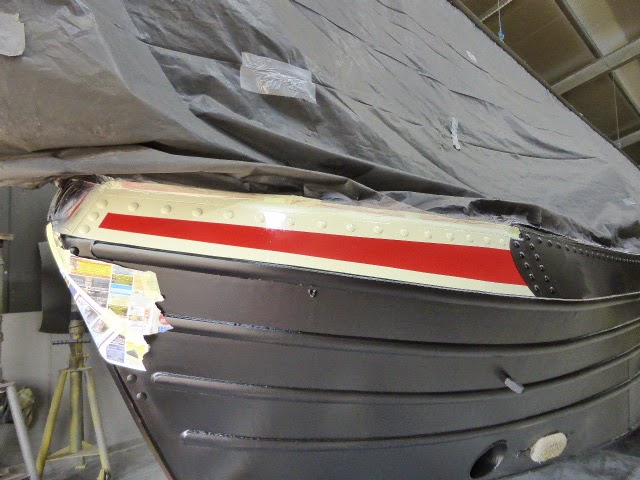 Masking removed and one bow flare is revealed 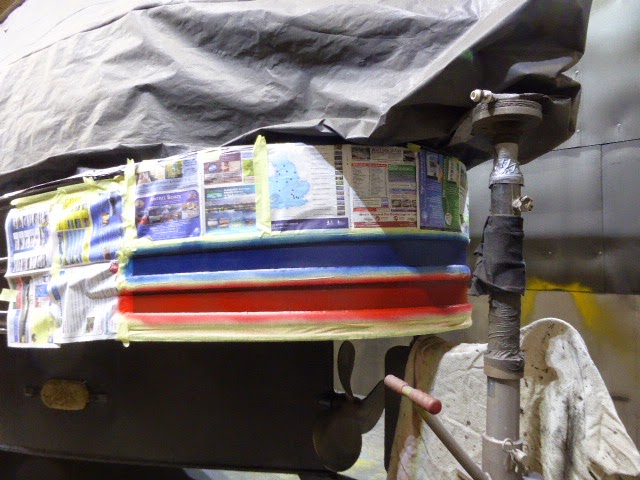 Starting to layer paint on two of Yarwood's three tunnel bands
Yarwood will stay in the shed over the weekend to 'cure' and then Monday morning we will present ourselves to pay the bill and get our boat back.
Posted by Nb Yarwood at 07:49 10 comments: