When we moved on to a narrowboat just over six years ago I transferred to a GP (doctor) close to our correspondence address which was/is nowhere near a canal.  Fortunately I haven't needed the ministrations of the medical profession and I always knew that should I need a Doctor I could simply get an appointment anywhere as a visitor and that is satisfactory...but
Your medical notes are not available or updated and, you don't get routinely screened for the nasties that age can/may bring.  When I joined The Association of Continuous Cruisers I learnt that I didn't need to have an address in the catchment area for a GP but could/should be treated as a 'homeless' person. Armed with this information I tried to sign on with a GP in Market Harborough last winter. My application met with a polite but firm rebuff.
I gave up.
This year I found that I had been 'de-registered' by my GP.
I wrote to NHS England and asked for their assistance stating that;
I am a British C!itizen since birth
I am fully paid up re National Insurance
I have no fixed abode
I need a GP close to a canal
I want to sign on with a GP in Market Harborough.
A number of emails, phone calls later and I was registering with a GP in Market Harborough and everyone I dealt with was helpful and pleasant...
A miracle in itself given the disposition of too many NHS personnel.
I am now able to access preventive screening for bowel and breast cancer etc.  and Joe, who has also transferred to a Doctor we can get to if necessary, has access to all the Man stuff he needs to be screened for.
Where there is a will there is a way.
Posted by Nb Yarwood at 16:38 5 comments:

Things afoot for next year..


I travelled down to Essex on Saturday, train from Rugby to Euston, Underground to Earls Court...Earls Court?  Yes,  those that know London will realise that either I was hopelessly lost, heading off towards the west rather than the east, or I was up to something....
Earls Court Exhibition Centre was hosting The Kennel Club's Discover Dogs a two day extravaganza where you get to meet two hundred or more different breeds of dog and their breeders.  Joe and I went years ago when we were thinking of getting a dog and at the time we were looking at Great Danes, Mastiffs, Spinone and Leonbergers...we finally decided on Labradors hence Fletcher and Floyd.  Now our wonderful boys are ten and nine and we are considering adding a small dog to the 'pack' ahead of the inevitable...one of them dying and leaving their mate alone.  We have thought that introducing a 'boat sized' dog next year would provide enough time to establish the new pack member and barely take up any room on the boat. The new dog had to be small, robust, happy to walk the miles we cover, a swimmer, sociable and healthy.
Of the breeds I looked at, half a dozen or more appealed to me, we opted for a Norfolk Terrier.  We have been to meet a breeder and will be looking to see if will can get a puppy next summer!

For the last couple of weeks we had been quietly moored out at Foxton ahead of a weekend gathering of three of the four crews that are making the Wash crossing from Boston to Wisbech next year.  I had booked a table for Sunday lunch at the Waterfront, a restaurant/bar that occupies the former bonded warehouse at the basin so ahead of that date we slipped into Market Harborough and a pre-booked mooring.
Over lunch on Sunday, a lovely lunch I might add, we sorted out where and when we are going to meet next year ahead of our cruise to Boston.  We won't know the tide times until after Christmas so at this stage we are guessing at what our likely window for the crossing will be. 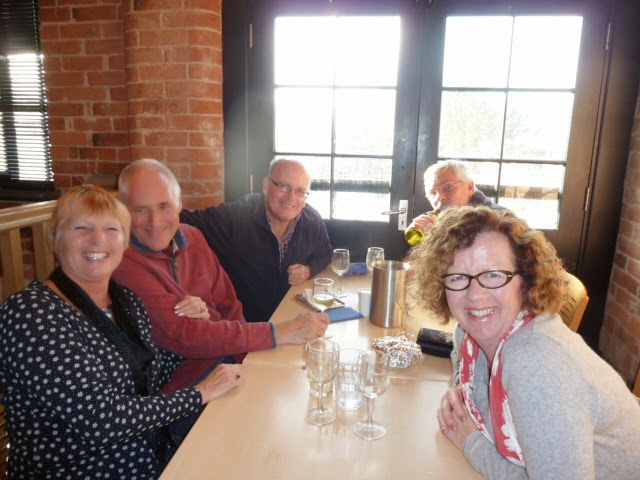 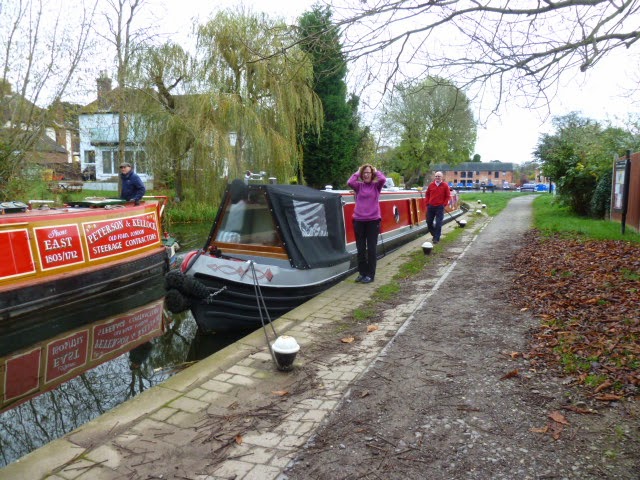 Passing David and Lisa on What a Lark  - Lisa horrified as I point a camera at her, "Lesley, I haven't done my hair!!"

Come Monday Morning were watched the F1 Grand Prix that Joe had recorded, filled with water and slipped out of our mooring.  Our destination now was Yelvertoft Marina where Yarwood is going to spend the winter while we are away in Spain. 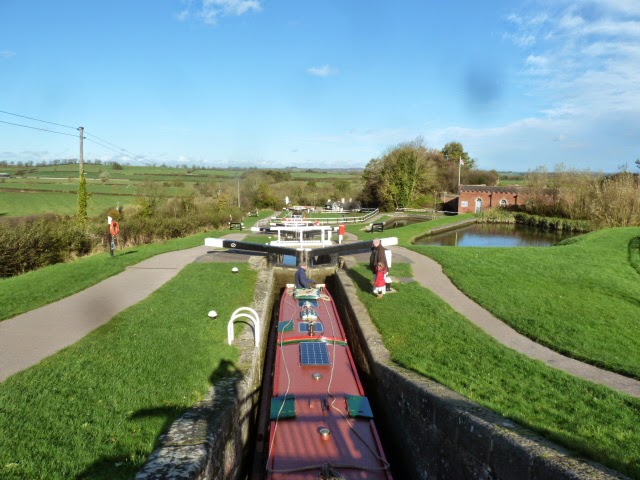 On our way up the Foxton flight
A glorious day for cruising. I walked the dogs from Harborough to Foxton, mooring at the bottom of the flight I nipped into the shop at Bridge 61 and bought a couple of their Cornish pasties which I slung in the oven to cook as we ascended the locks.   At the top we moored up and had our hot lunch before setting off again towards Welford where we moored for the night. 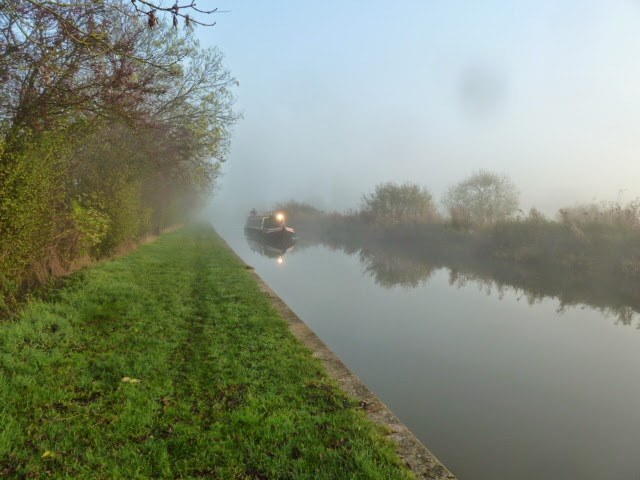 Misty start
Tuesday morning just before 8am we set off again.  There was a thick autumn mist and the tunnel light made an appearance though we never met another boat until we arrived at Yelvertoft wharf. 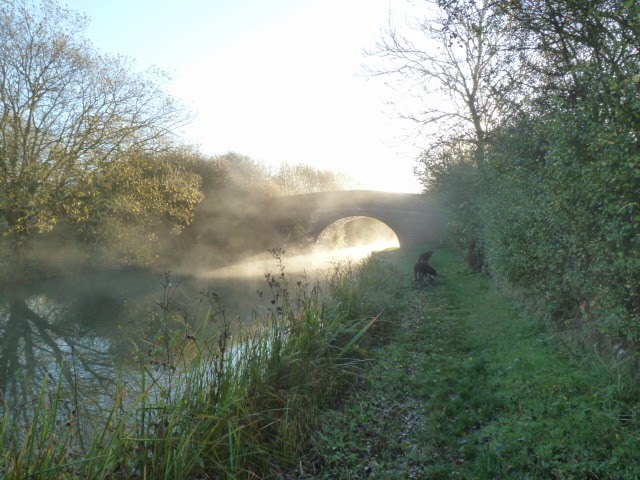 Mist in the bridge hole 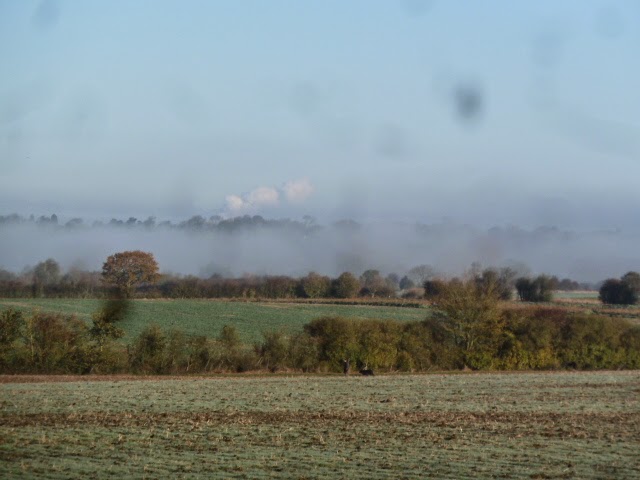 As we came through Yelvertoft bridge, Joe slowed and  I loaded the dogs back on board Yarwood and stepped onto the gunwale at the back. No sooner were we clear of the bridge than I spotted a CRT work boat pushing a loaded flat towards us but immediately behind the first boat was another. The second boat was going far too fast and lost control of the flat he was pushing, crossing our bow, Yarwood now in screaming reverse, the flat rammed the bank to lose some speed, straightened then took the rest of his speed off down the side of Yarwood which sent me scurrying back along the gunwale towards the stern to get out of his way and potential broken leg his empty flat offered me. A sheepish "sorry mate" to Joe and a filthy look from me and we were passed each other.  What a twat!

I had called ahead to Yelvertoft to find out where they wanted us to moor so we were able to turn in and reverse on to our pontoon with little difficulty. So that's it for cruising this year. We are now preparing ourselves to decamp but ahead of that their is family visits and winterising Yarwood to be done. 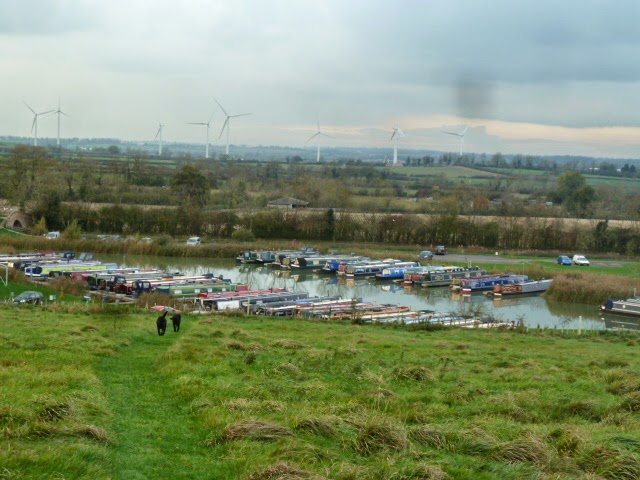 Looking down from the dog walk above Yelvertoft marina
Posted by Nb Yarwood at 16:29 6 comments: