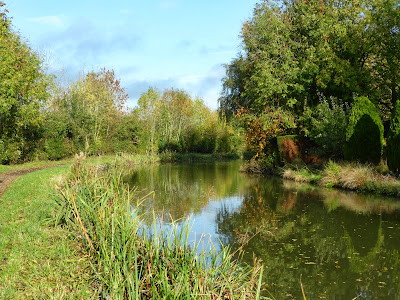 Market Harborough Arm basking in autumn sunshine
What is now known as The Market Harborough Arm was once the planned route of the Leicester and Northamptonshire Union Canal.  The original thinking was to build a canal from Leicester with its links to the River Soar and the River Trent and therefore the Humber and eastern ports, to Northampton on the  River Nene with links to The Wash.  The added bonus was that the Grand Junction Canal was also being planned from London to Braunston in Northamptonshire and this included a link to Northampton!.
The realisation that  'We have a network*'! -  (*with reference to the lyrics of the C.W. McCall hit Convoy) must have lit little oil lamps in the investors brains.   By 1797 the canal had been built as far as Debdale where the venturers ran out of money.  With further capital raised however the L&N Union Company extended the canal as far as Market Harborough and this section opened in 1809.   And that is where it stopped, until a new route and a new company, The Grand Union Canal Company, now known as the Old Union, built the canal on what is the current route linking Foxton with Norton Junction in 1814 and left Market Harborough to its Arm. 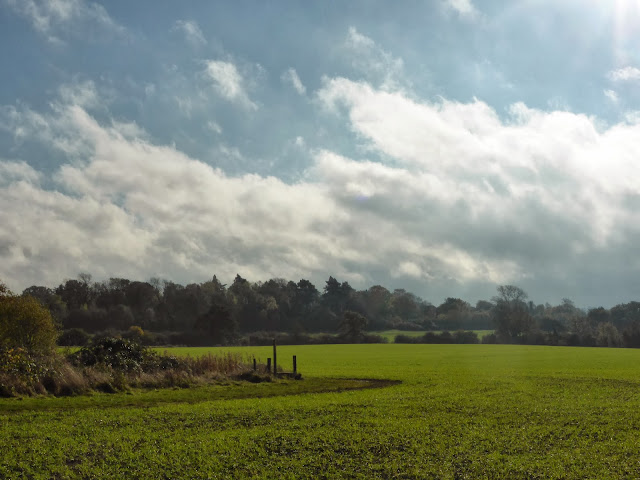 Yesterday I set off to walk to Foxton with the dogs but instead of tramping back along the tow path I walked 'across the top'.  The canal/arm sets a sinuous route as it follows a contour into Market Harborough, saving the canal builders the cost of building locks to go over the top, but I saved us miles and time by doing so. 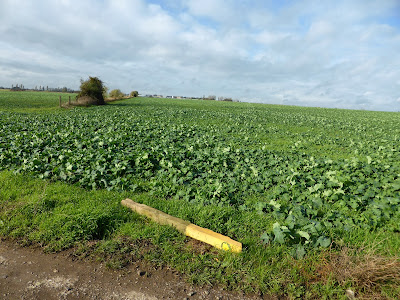 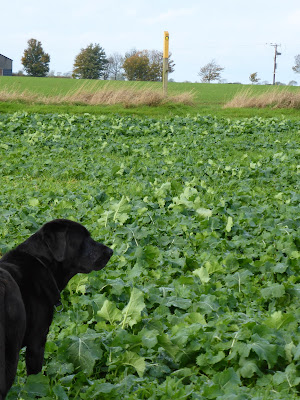 You can see the way maker in the background but the footpath has not been reinstated by the farmer after he/she cultivated his field.  Walking through the rape however disturbed a hare and both dogs enjoyed a fruitless game of chase. 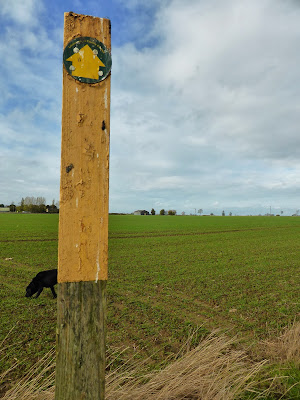 Not a single field had the Public Footpaths reinstated...naughty, naughty Farmer! 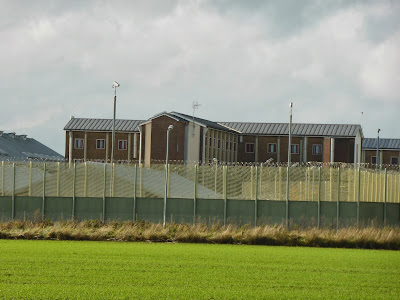 Coming across the top of Foxton Moor, formerly the hunting grounds of the Dukes of Lancaster,  you pass HMP Gartree built in 1963 and a high security class B prison for male lifers. 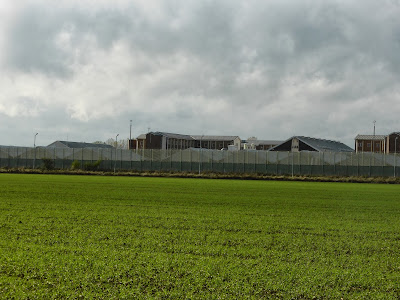 HMP Gartree has provided accommodation for Ian Brady, Reggie Kray, Tony Martin and Antony Sawoniuk.
I dropped down to the canal towpath after crossing the summit, stopped for a chat with Chris and Richard of Nb. Mandalay who were moored along that stretch and then walked on into Foxton.  I wanted to photograph a former coal wharf, (there are four former coal wharves along the five an a half mile stretch of the Arm) because it still has a very interesting installation... 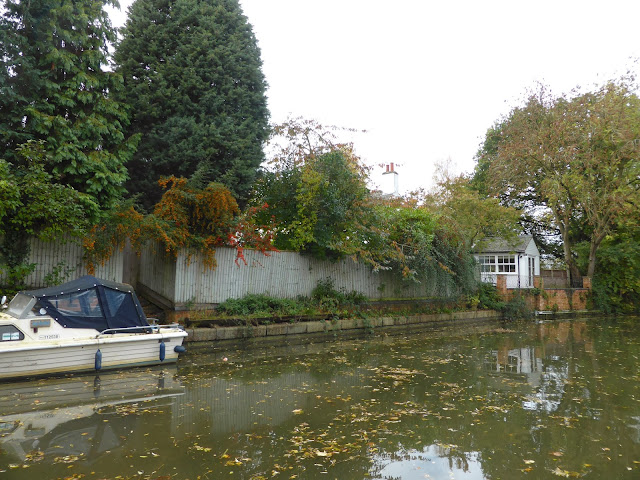 This the remnants of Foxton Wharf - canal side. 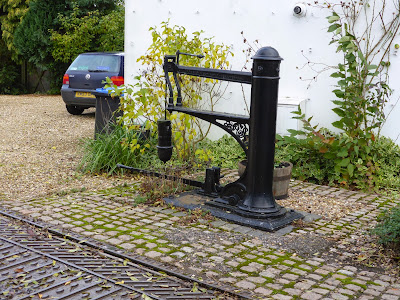 And this is one of the features I wanted to share with you. A Pooley flat bed scale for weighing bags of coal. 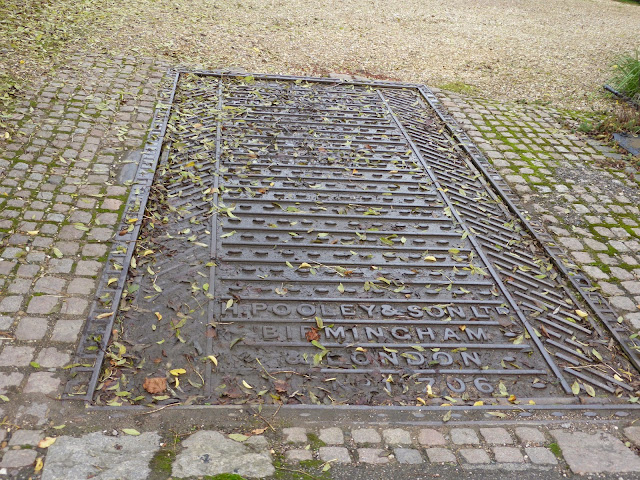 And here is the other. A weighbridge as you enter/exit the former coal yard. A  Henry Pooley and Sons Ltd Weighing Machine.  The company started making these weighbridges in 1835. 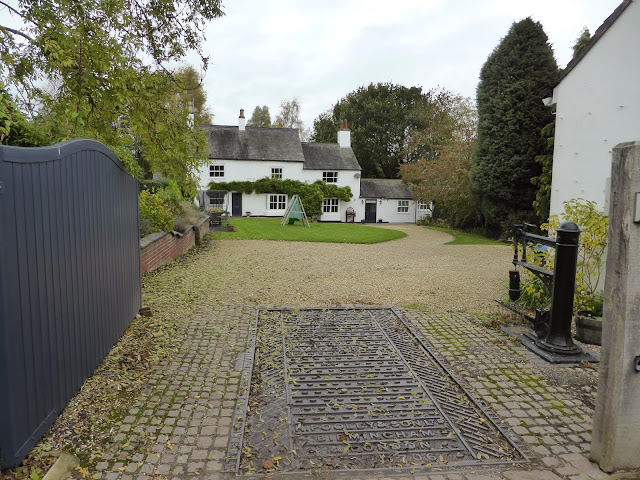 Formerly owned by the Saddington Family ( Saddington reservoir - village just along the cut towards Leicester) they operated a forge on this site and soon opened a coal wharf when the canal came through in 1809.

Having got the photo's I walked on  the bottom of the locks where C&RT are preparing for extensive winter works and had a pint in Bridge 61 before taking an alternative route back over the Foxton moor and into Market Harborough. 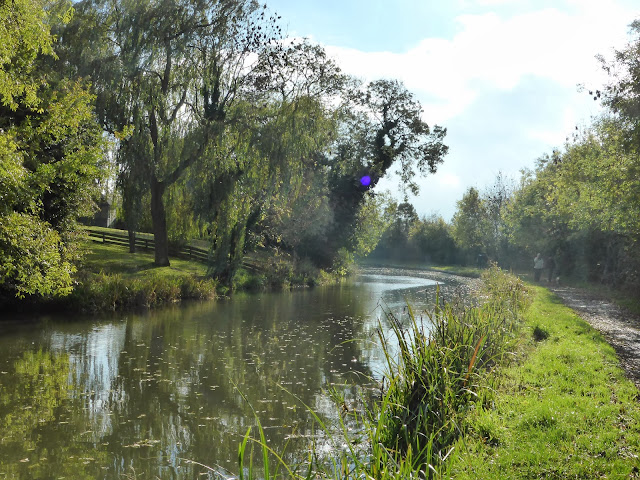