The inaugural Winter 2013-2014 Moorers social took place last night with thirteen of us trooping down into town from the Union Basin.   The Social Secretary, Gill, had booked a table at The Sugar Loaf which was just as well because the place was buzzing at 5pm as we arrived.  Joe and I left after a couple of hours because we had been caught on the hop by the early-doors start and the dogs had not been afforded a last minute 'comfort break' before leaving them and the boat.  As it was, the dogs were fine but we didn't want to chance our arm, or the boat, to what might have been.... 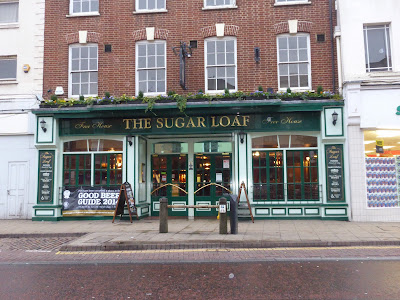 The Sugar Loaf Pub
This Wetherspoon pub was once Thomas Goward's grocery shop. Founded in 1810, Goward's traded on this site until 1910, weighing out provisions and cutting sugar by hand from a conical-shaped sugar loaf.
In a warehouse behind the shop, Goward's staff blended tea, ground coffee, chopped sugar, ground spices and washed and polished dried fruit for sale in the shop. In 1871, Goward lived over the shop in a large household, which included his wife and three daughters, three of his shop men and two domestic servants. He later moved out to a villa in Victoria Avenue. - From the Wetherspoon web site 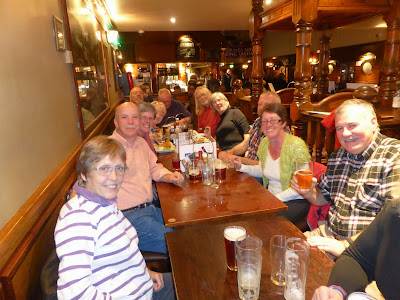 Here be most of the crew, missed but to be caught on camera next time was Joe, photographer, and Sue..though her arm features!  A lovely evening and a grand crowd!
Posted by Nb Yarwood at 10:32