Lying in our nice warm comfy bed this morning listening to the wind rattling the plank and boat pole on the cabin top I said to Himself, "I think we might be staying here today" but by the time we dragged ourselves into an upright position the wind had diminished and the day looked set fair.  By 7.20am we were on the move, the dogs and I tramping the towpath and Joe steering Yarwood.

I met and greeted quite a few early morning dog walkers exercising their dogs along the cut - my greeting just a little jaundiced after having shovelled any amount of canine excrement off of moorings at Hopwas and yet more at Aimington last night.  In fact things were so bad at Hopwas that I might drop a line to the Parish Council  - probably get a 'nowt to do with us' response but hey ho, it is worth a punt surely.
After a little twenty minutes we approached Alvecote Marina.  Sitting up on the hard was Nb. Dane, being extensively refurbished.  Dane is a wooden boat built in 1907 and initially operated by the Severn Carrying Company. 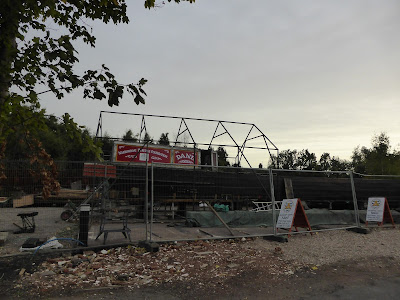 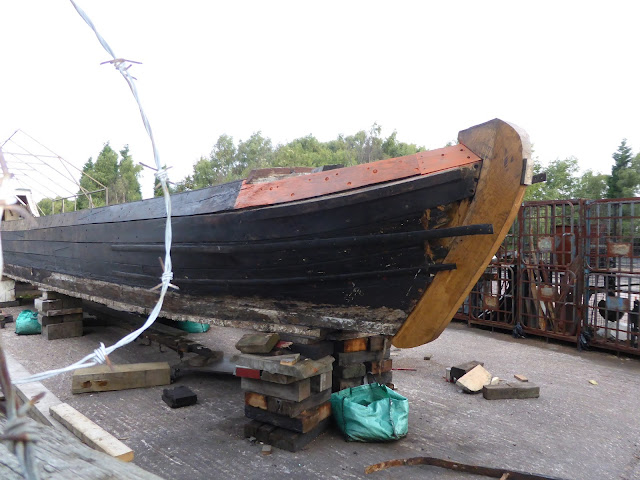 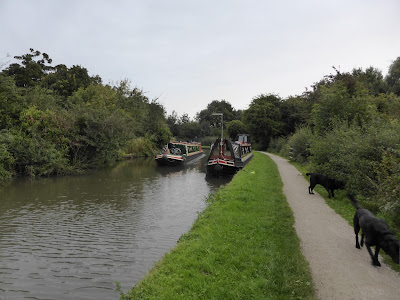 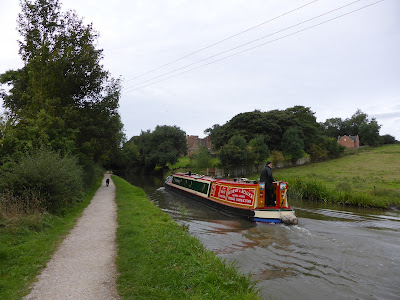 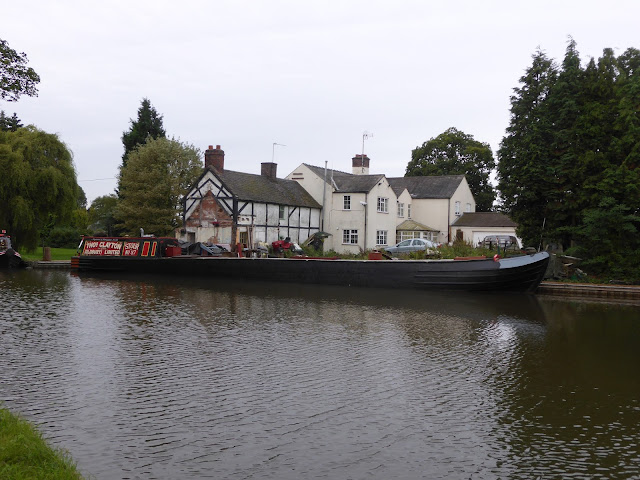 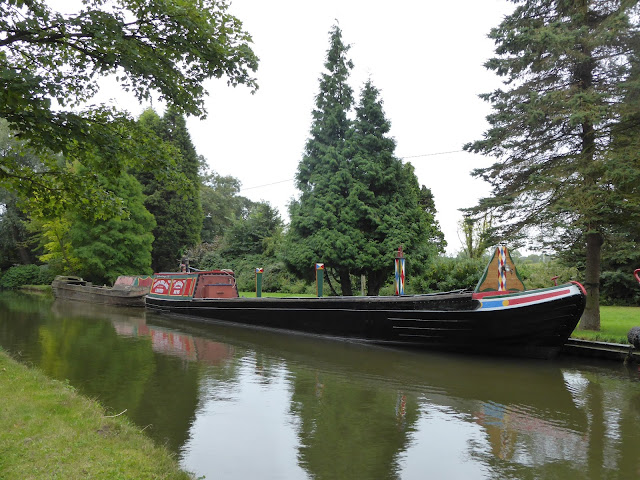 And another, but steel construction this  time
Arriving at the bottom of the Atherstone flight of locks and needing a cuppa and a leak, not necessarily in that order, we pulled over and moored up....and then decided that the locks could wait until tomorrow.  It was 9.30 and I had walked nearly seven miles so we breakfasted and then decided to walk into Atherstone for a look around and a few bits from Aldi. no sooner had we stepped out of the boat than we were beeped by Pip and Roger as they approached the queue for the locks. 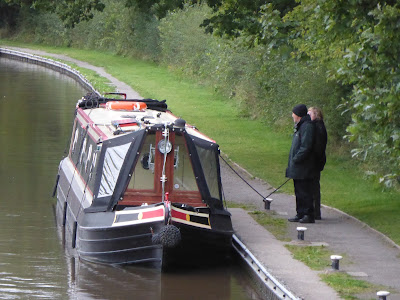 Joe and Pip with Windsong on a 'lead' 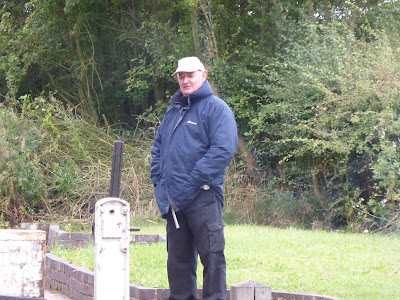 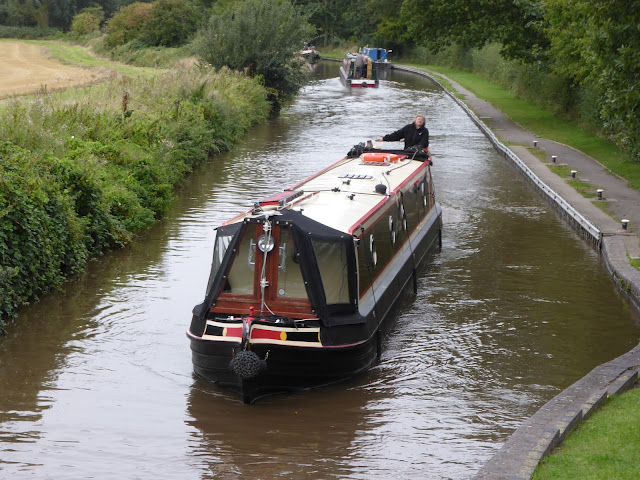 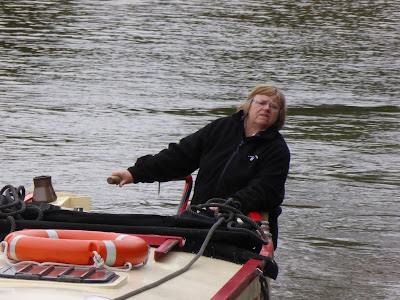 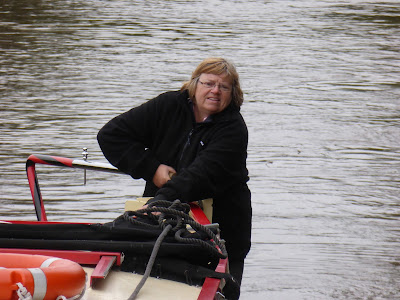 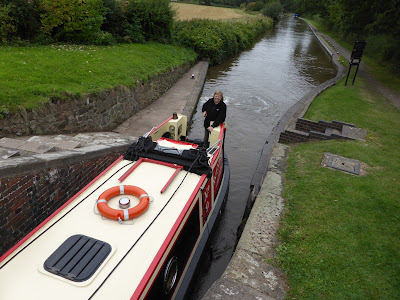 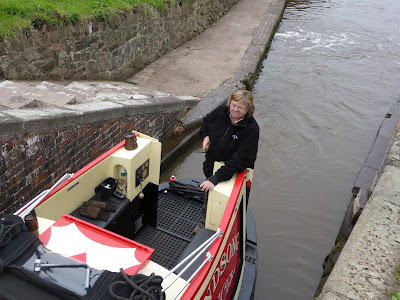 Once in and the gates closed we abandoned them to their task and went in search of Atherstone town centre. 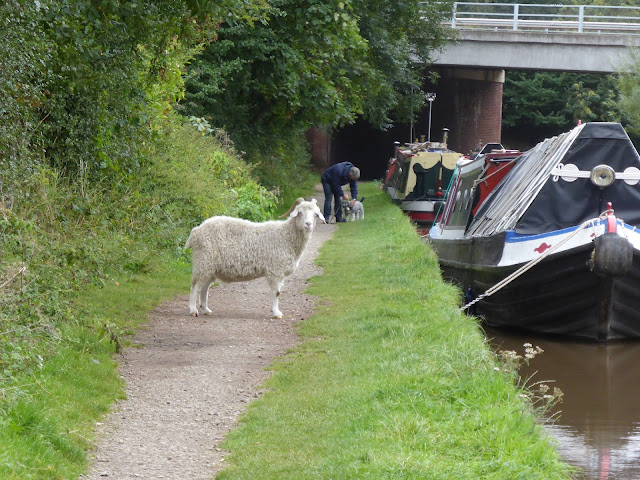 En route  we met this girl on the towpath  Note the chap in the background hastily putting his dog on a lead.  The goat ( I think a goat rather than a sheep but what do I know?) looked first at us and Floyd and Fletcher and then at the other dog approaching and then panicked and headed back to its field but didn't factor in the barbed wire.  Joe took the dogs and I clambered up the bank to the trapped animal and proceeded to dismantle the fence, disentangle the creature and prise open the wire strands sufficiently for the goat to get back to safety.