In praise of a Boatman's cabin

Your wages are shrinking, yet another cut in pay this week.
The profits of the canal companies are under threat from the new railway companies so wages, which have been good, are about to take a tumble.  How are you going to make ends meet?
Move the family out of your rented cottage in Manchester or Birmingham or London and move them on the boat with you?
Could that work?
Indeed it did and from the pressing needs of ordinary working boatman and their families came the development and refinement of the 'boatman's cabin'.   Eight foot six inches of boat length that became, bedroom, kitchen, parlour, and bathroom for entire families.
My interest in boatman's cabins started when I read the book Idle Women. by Susan Woolfit.  This book was the story of a middle class woman who joins the ranks of women recruited in WW2 to crew working narrowboats.  Similar to the 'land girls' that joined the 'land army' to work the land in place of the men that were called-up for wartime service, the women of the Inland Waterways, IA ( hence the sobriquet of  Idle Women) replaced the male boat crews helping keep the wheels of commerce turning by delivering the coal etc. that the Country needed.
In this strange and new environment the mother of two, in her thirties, marvels at how well designed/developed the living accommodation of the working boat is.   It was her explanations of what each stylised bit did, its purpose or purposes, because much of the cabin kit has dual roles, that I started to realise the a traditional Boatman's Cabin was more than a pretentious adornment!
In the photograph below we are looking at the rear of the Boatman's Cabin.  From right to left  - firstly is the table cupboard.  The painted panel in the cupboard, when opened, becomes the cabins' table.  The drawer immediately beneath is the crumb drawer. In this cupboard the crockery, cutlery  and food supplies would have been stored. The black stove alongside the table cupboard, the range cooker of its day, was where all the cooking for the family was done, water was heated and the source of warmth for the family's home came from: a source of heat, both winter and summer. 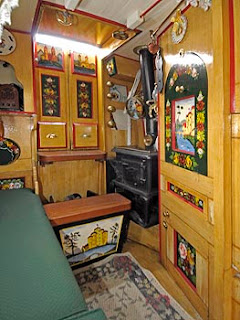 An oil lamp mounted on the side of the table cupboard by the stove,  lights the cabin interior and the brass 'bed knobs' affixed by the back door help to reflect that light .  The step leading up to the rear doors doubles as a coal scuttle. The side bench to the left becomes a bed at night for children. 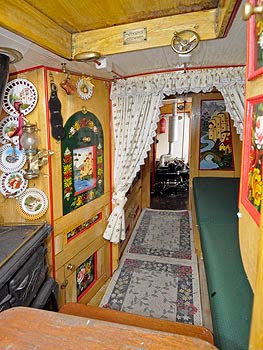 In the image above we are looking back into the cabin.  On the left, the range with its oil lamp mounted to the side and ribbon plates affixed to the wall.   The table cupboard and just behind the lace curtail yet another cupboard.  This cupboard  is the bed'ole.  The cupboard door  opens across the walkway  and forms a cross-bed.  The cushions and bedding are stored in the cupboard.  This would have been the double bed of the boatman and his wife with their children sleeping on the side bed and the floor. 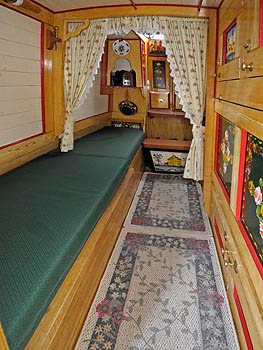 The bed'ole cupboard can be seen on the right here, on the left the side bed running the length of the cabin.
These days we haven't got to cram a family into 8'6" of boat length but the traditional boatman's cabin still has something offer.  When cruising in winter the helm has a source of heat, standing on that top step with the hatch open and the doors closed behind you is going to help combat the cold.
When moored up you have a perfectly comfortable and warm space to enjoy including a settee/day bed to sprawl on.  When the cross bed is down you have a cabin/bedroom and when it is closed your 'bedroom' becomes a space that can used during the day.  A versatile and useful space that is definitely going to find its﻿
place in Yarwood.
The photographs are of a boatman's cabin fitted out by Barry Hawkins Boatbuilder.
﻿
Posted by Nb Yarwood at 16:08