And for those 'occasional guests'.. 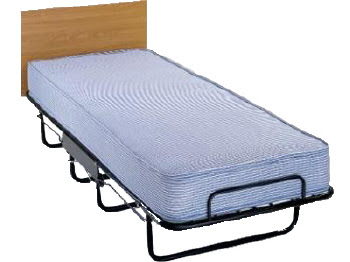 We were going to have Stuart (Barnowl Narrowboats) contrive an occasional bed that would fold out from under the tug deck for the use of visitors, and one of us, well me mainly,  if I have a night when I cannot sleep.    It was Joe who spotted the fact that we were trying to reinvent the wheel - a folding bed.  Hadn't someone already done this?
I quick trawl through the web and we found sites that sold myriads of folding beds and we have found just the thing.   This has a 7" sprung mattress, fits in a space 2'x3'x2'6" when folded and is on casters for ease of movement.  This will comfortably fit in a cupboard and we have planned just such a  cupboard under the tug deck in the saloon.
Posted by Nb Yarwood at 06:42