There be oil...or, a visit to an olive oil processor...

Yesterday I accompanied Helen our host here at Olive Grove Farm, in Trujillos, Spain to the olive oil processor that she uses for her crop of olives. We went to see Jose at Milino Gumeil, a processor that has been operating at the same site for over two hundred years...well not Jose exactly but his ancestors....
As soon as you arrive the first impression is cleanliness.. there was not a scrap of dust or debris anywhere, everything is pristine. 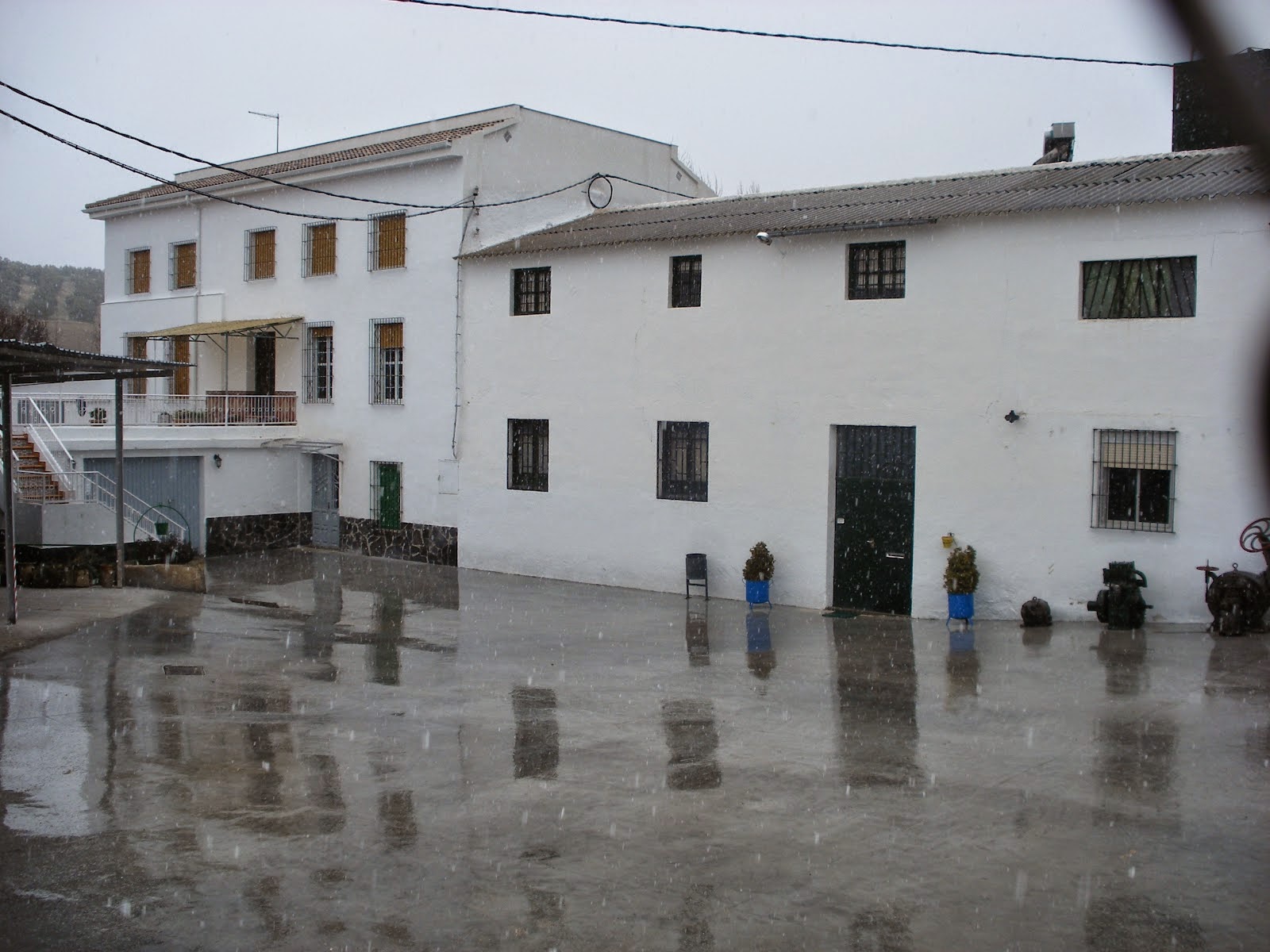 Milino Gumeil Olive Oil Processors
We start the tour looking at the ancient plant that was once used here. Housed in a large side room at the front of the plant are a series of olive presses that were installed in 1803!  In 1803 Spain had just 'sold' Louisiana to France, Charles IV was ruling Spain and there was a pause in the Napoleonic wars..
Four years later France had invaded and installed a new head of state and the English Duke of Wellington was leading the allies trying to defeat Napoleon in the Peninsular wars...I imagine Jose's ancestor's were busy pressing oil while this mayhem went on around them. 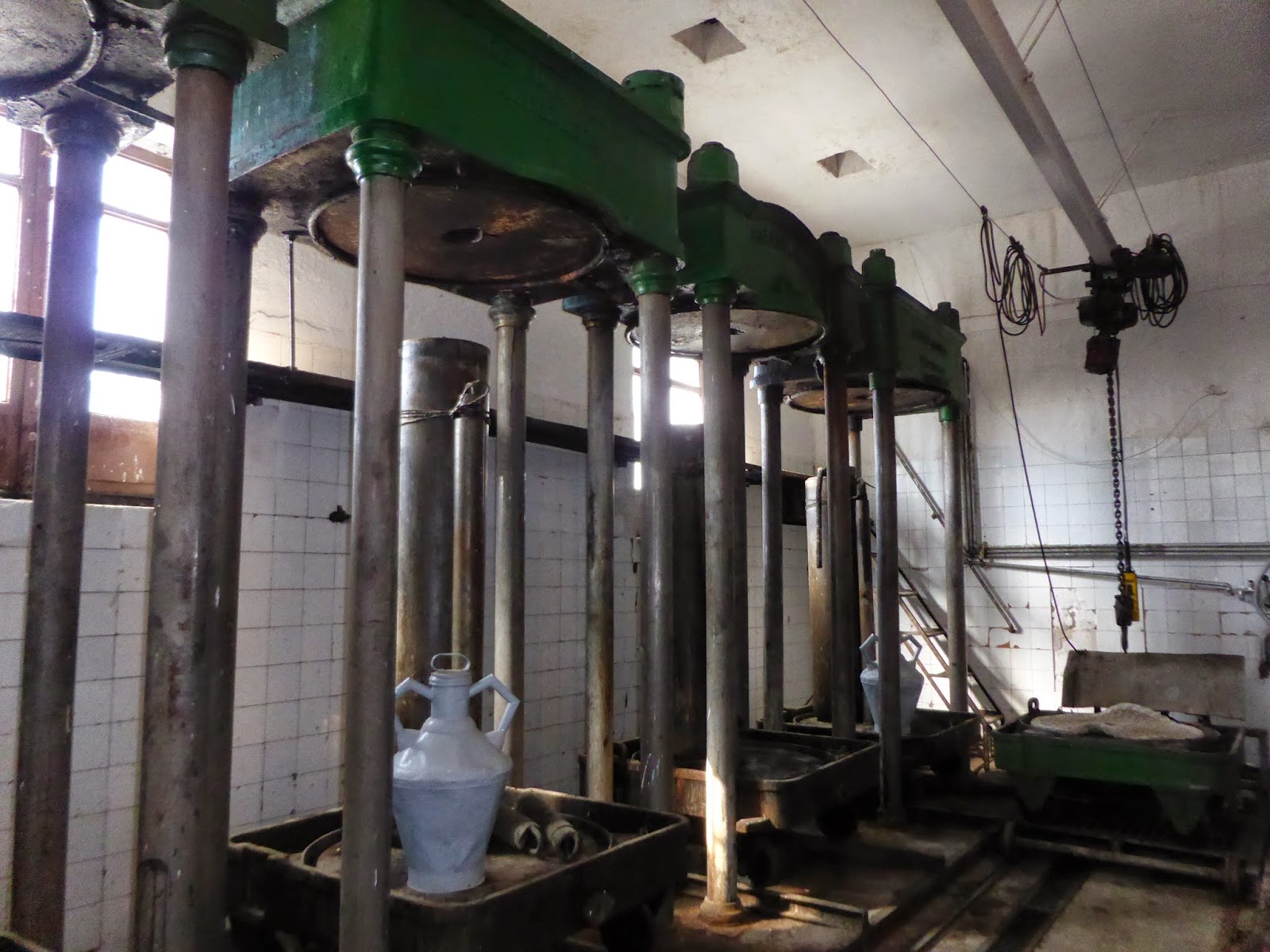 Here are a series of olive presses that were operated by water power.  Similarly to how cider is traditionally made, the olives were washed and laid in layers on mats and stacked into 'towers' under the presses. When pressed the oil run out into channels and collected in a series of subterranean tanks. 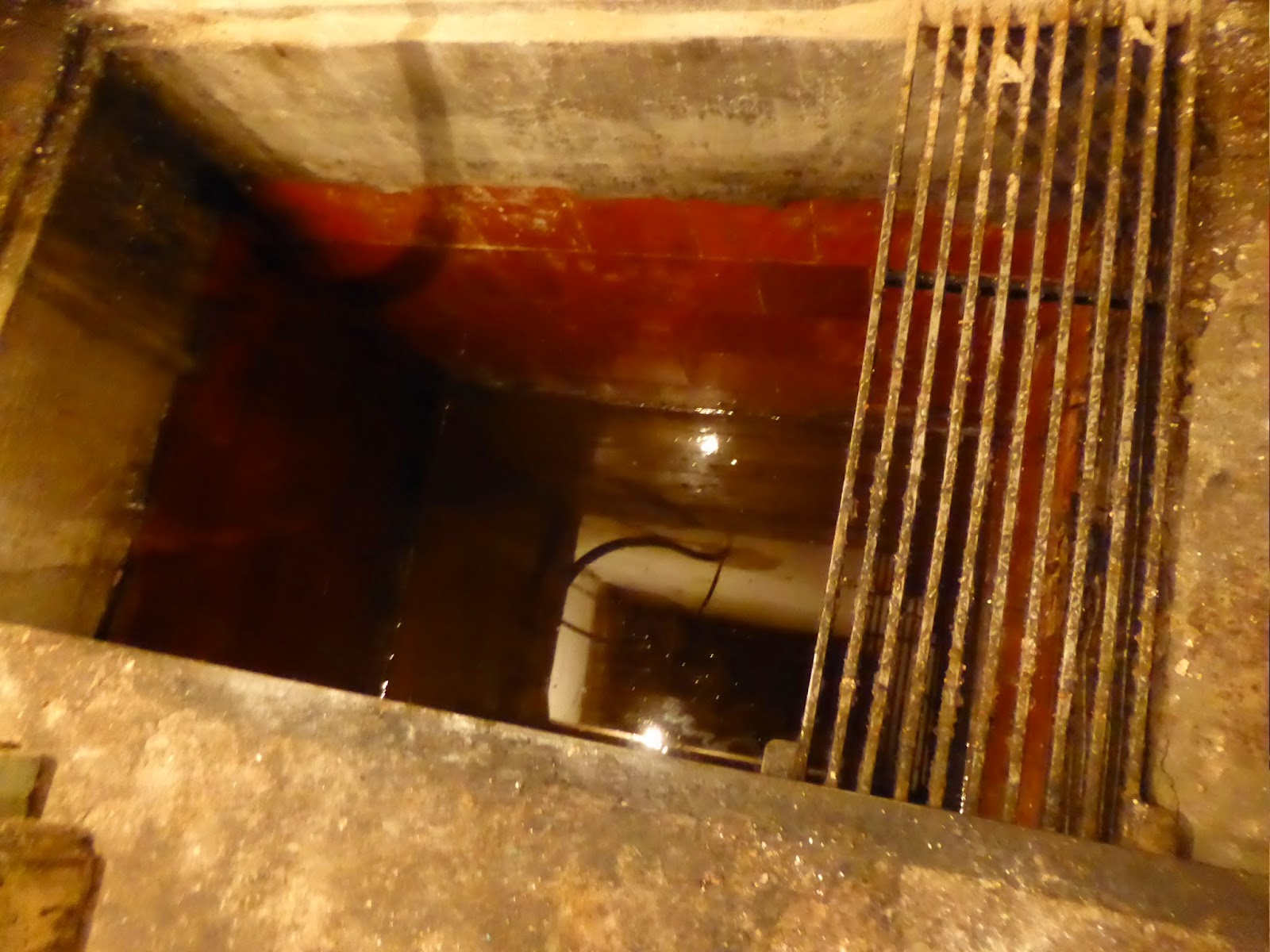 One of the old subterranean oil tanks
There were/are a series of eight tanks and the oil passed from one through to eight as it gradually lost its sediment and became purer.
Below ground is also a series of large water tanks, 3 metre diameter by 5 metres deep. 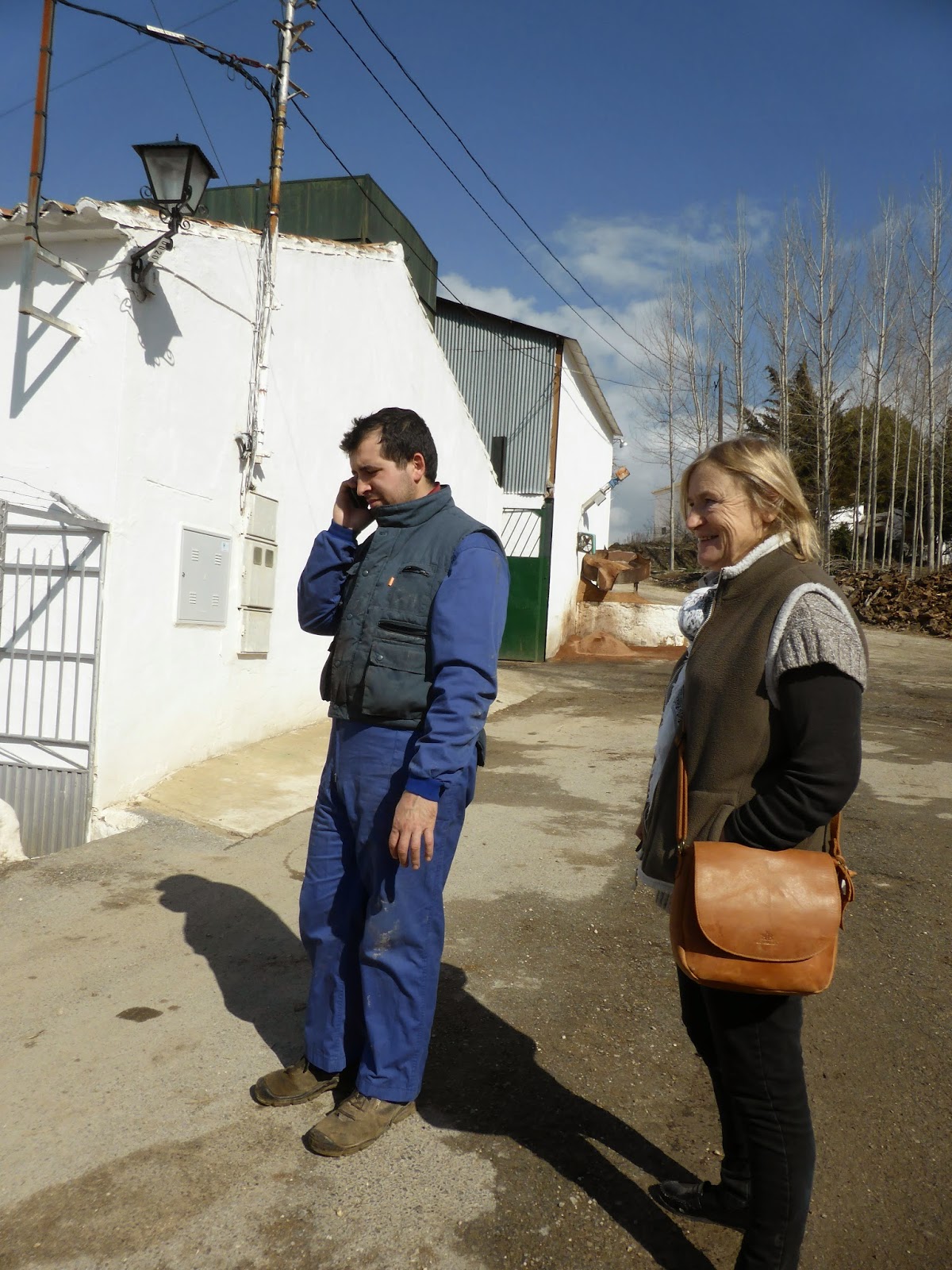 Jose, the proprietor of the Olive Oil Processing plant and Helen, the owner of Olive Grove Farmhouse where we are staying.
After seeing the historical part of the plant we were then taken on a tour of the current operation.
Starting at the point where the olive farmer delivers his/her trailer load of freshly harvested olives including leaves, twigs and stones. The trailer load is tipped over the grid below and the debris is separated from the olives. The olives are weighed and logged against the farmer's account they are then washed and a 1kilo sample taken for analysis. 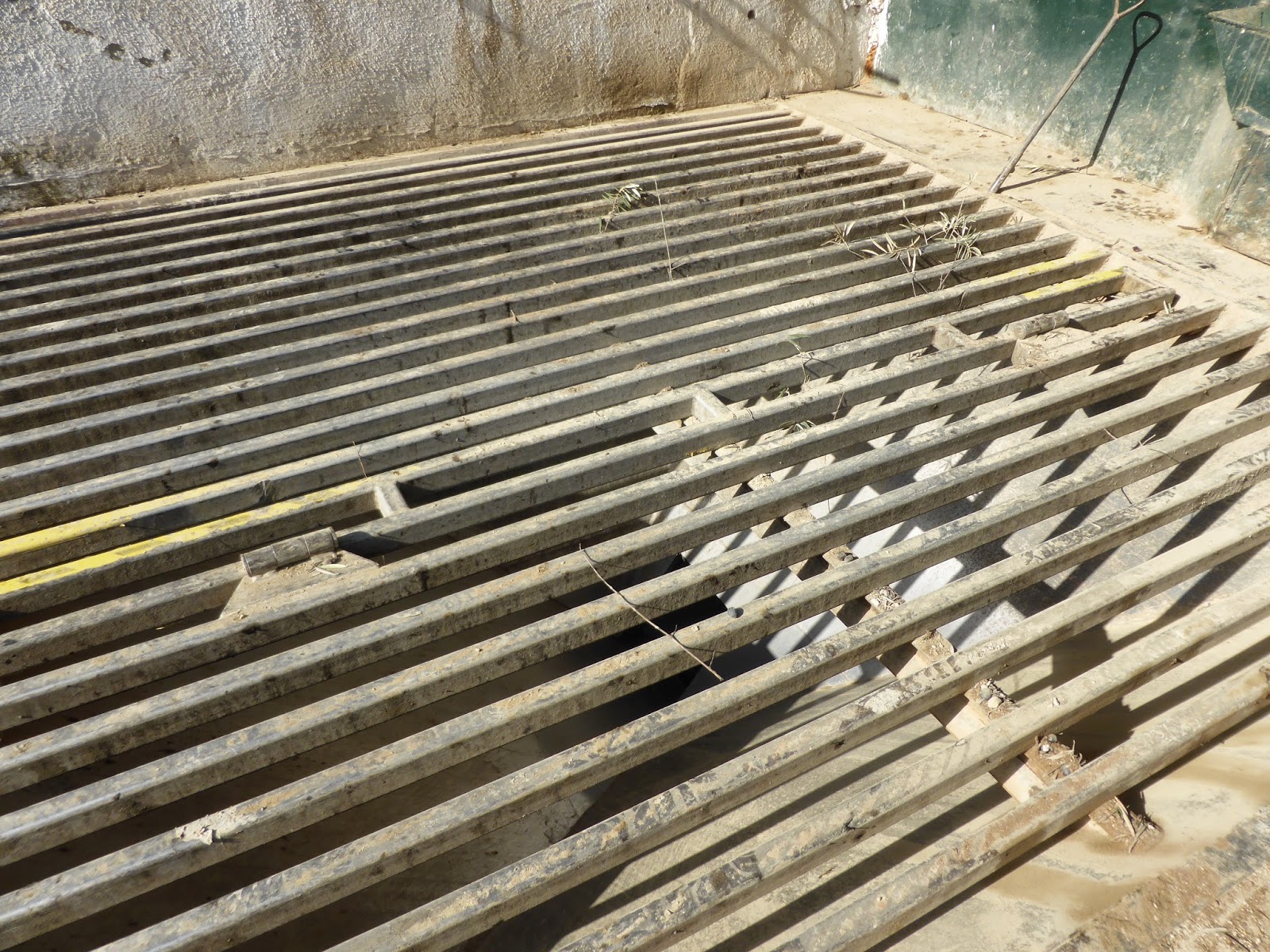 The freshly picked olive crop is deposited here over the grid 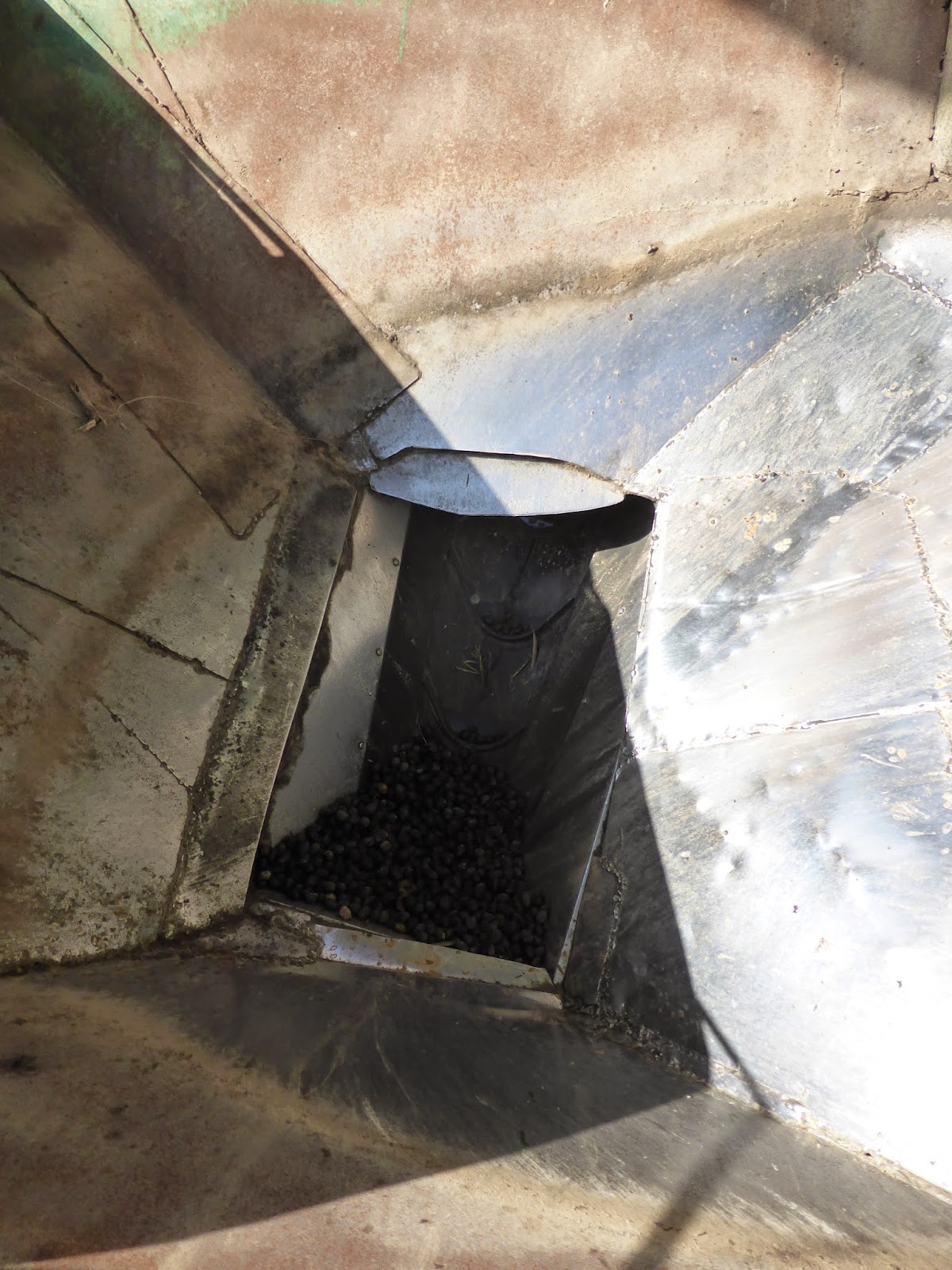 With twigs, leaves and stones removed the olives are moved along conveyer belts to be washed. 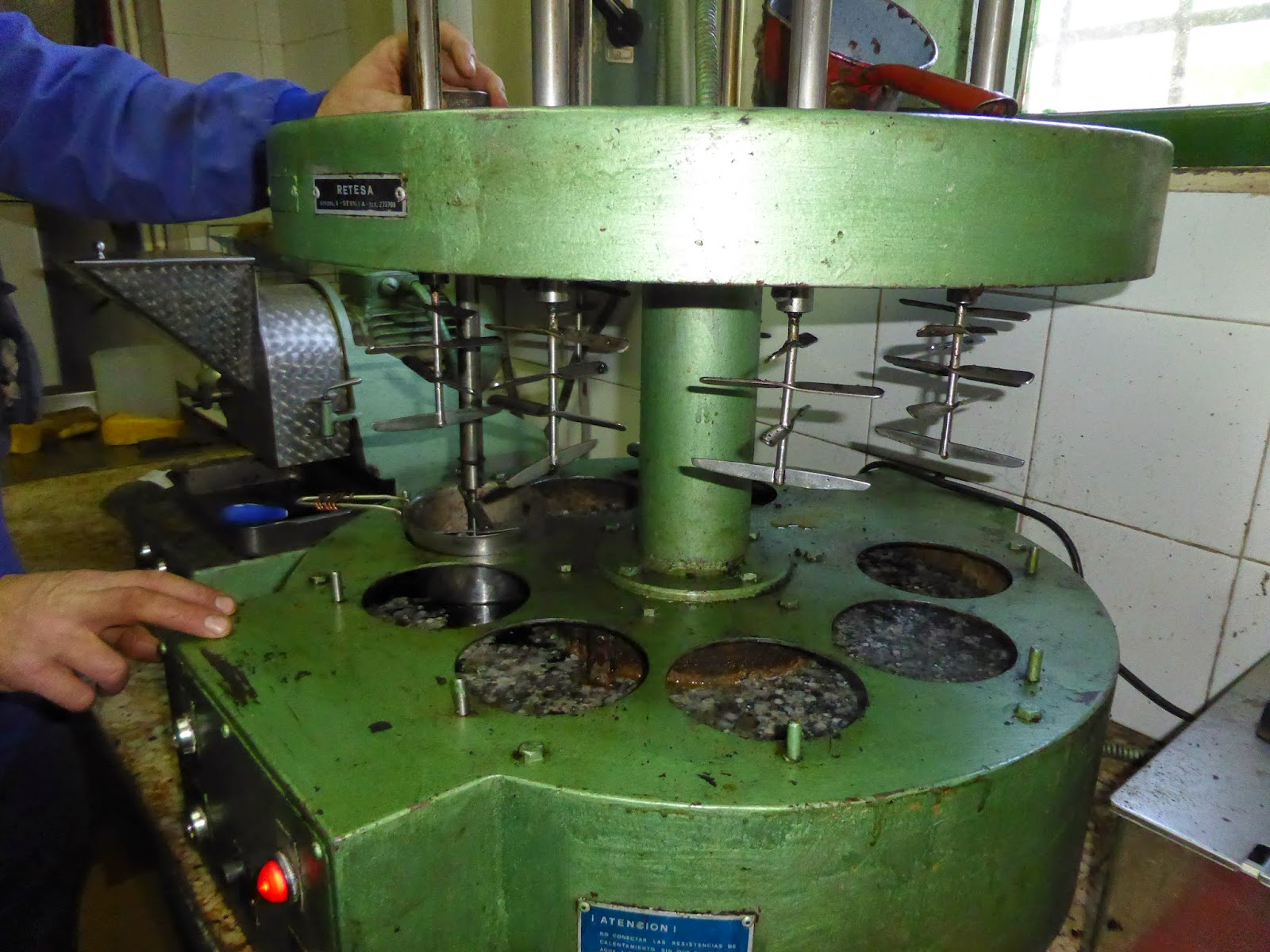 The I kilogram sample is mashed and warmed here

A  sample from each load is taken to the lab where it is processed to identify the oil content.  Typically you would expect 20%-25% yield so 100kgs of olives would be expected to 23- 25 litres of oil. 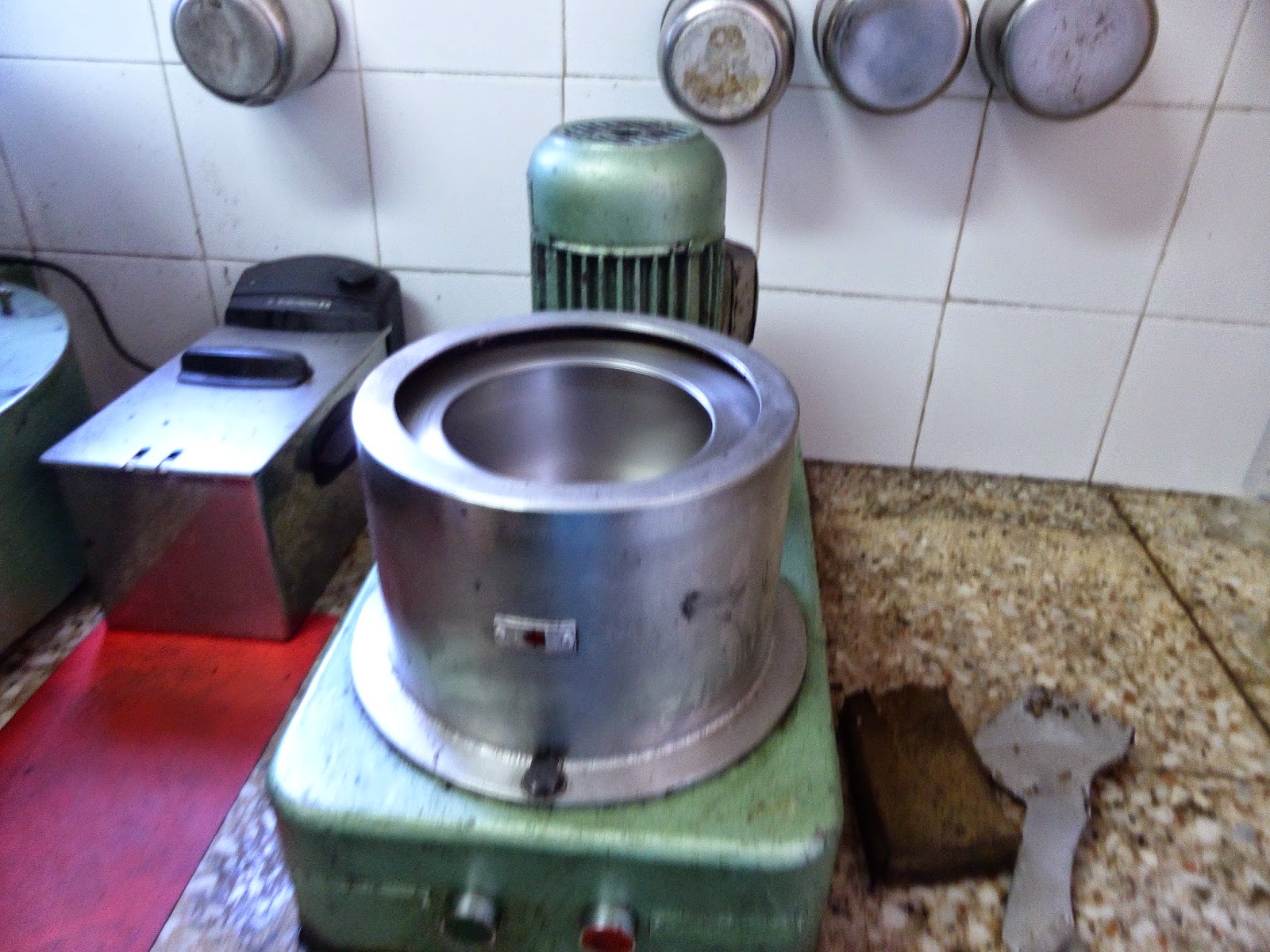 A centrifuge is used to extract the oil
The now washed olives are now fed into a machine that bruises and breaks the olive skin and stirs them for 25 minutes or so before they are transferred to another machine where heated water is added. 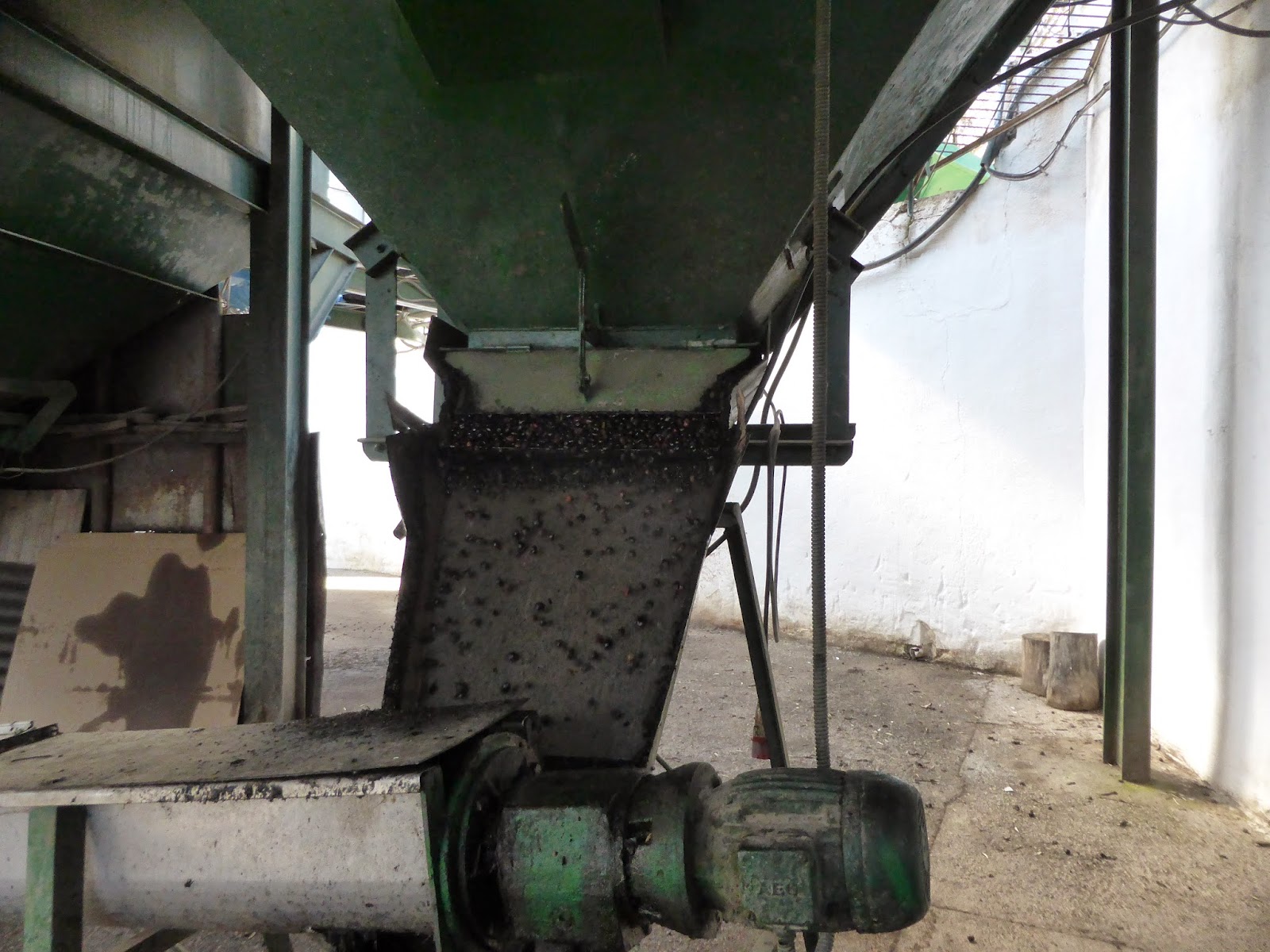 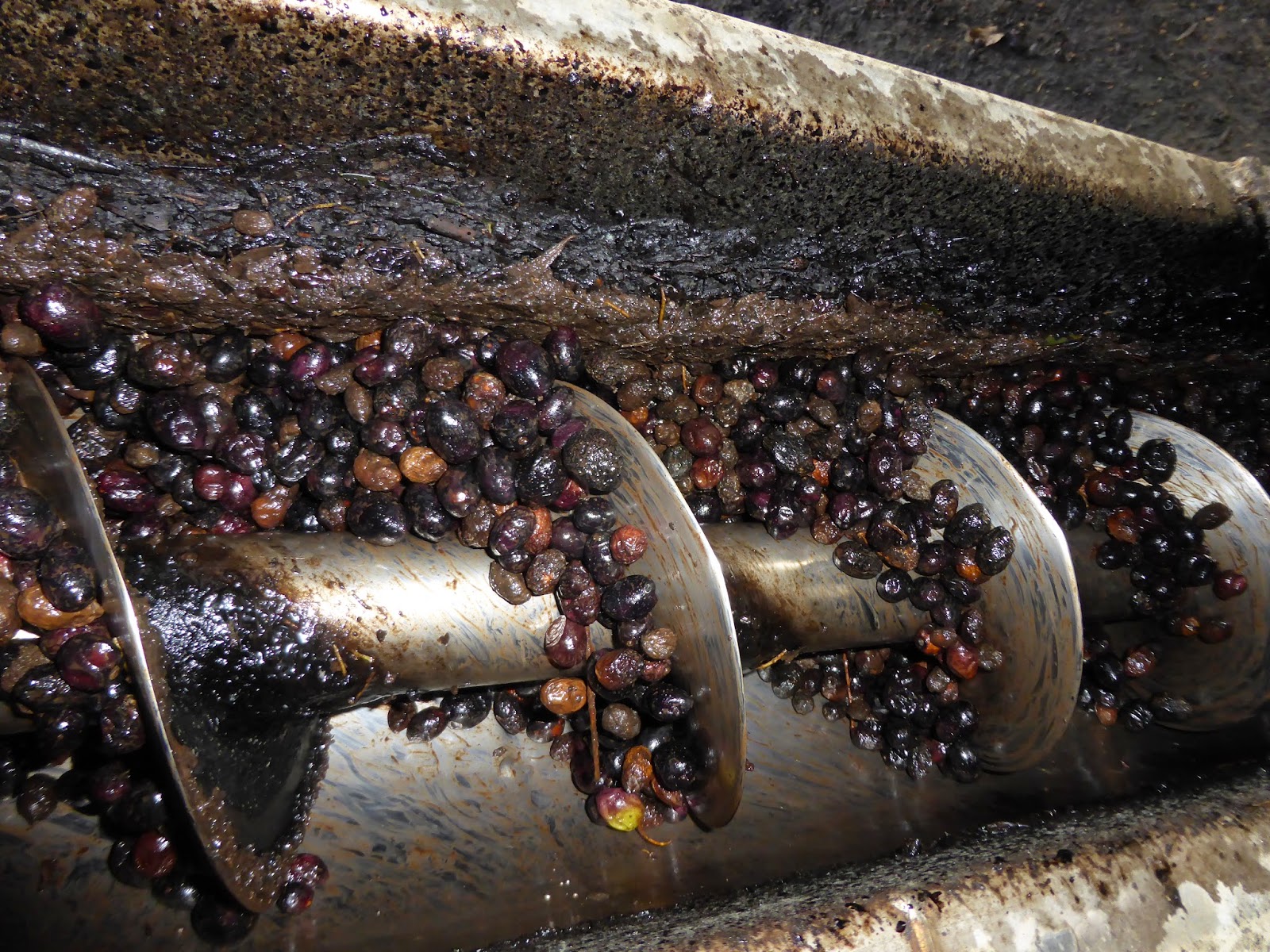 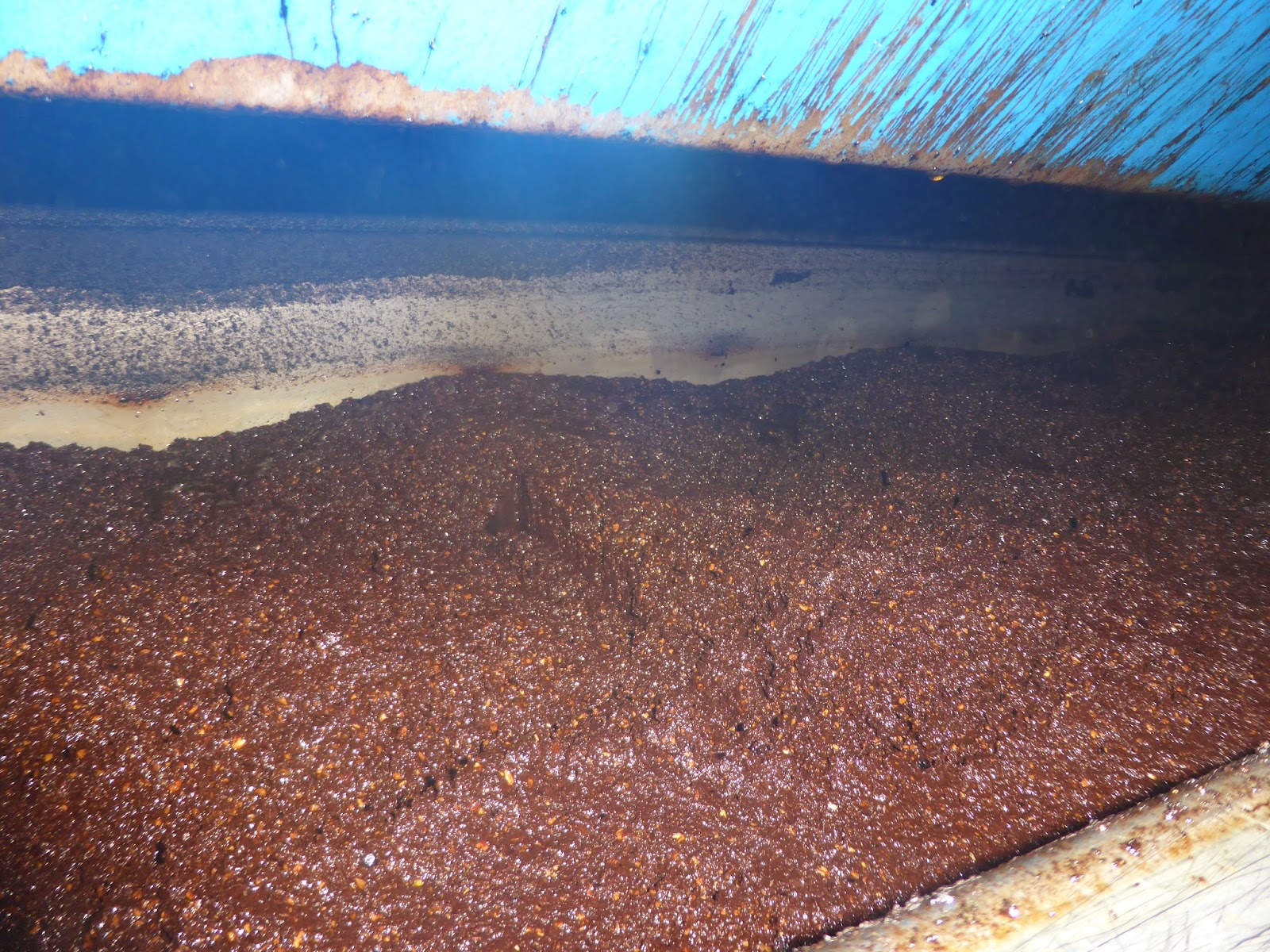 The  olives are mixed with heated water and form a mash 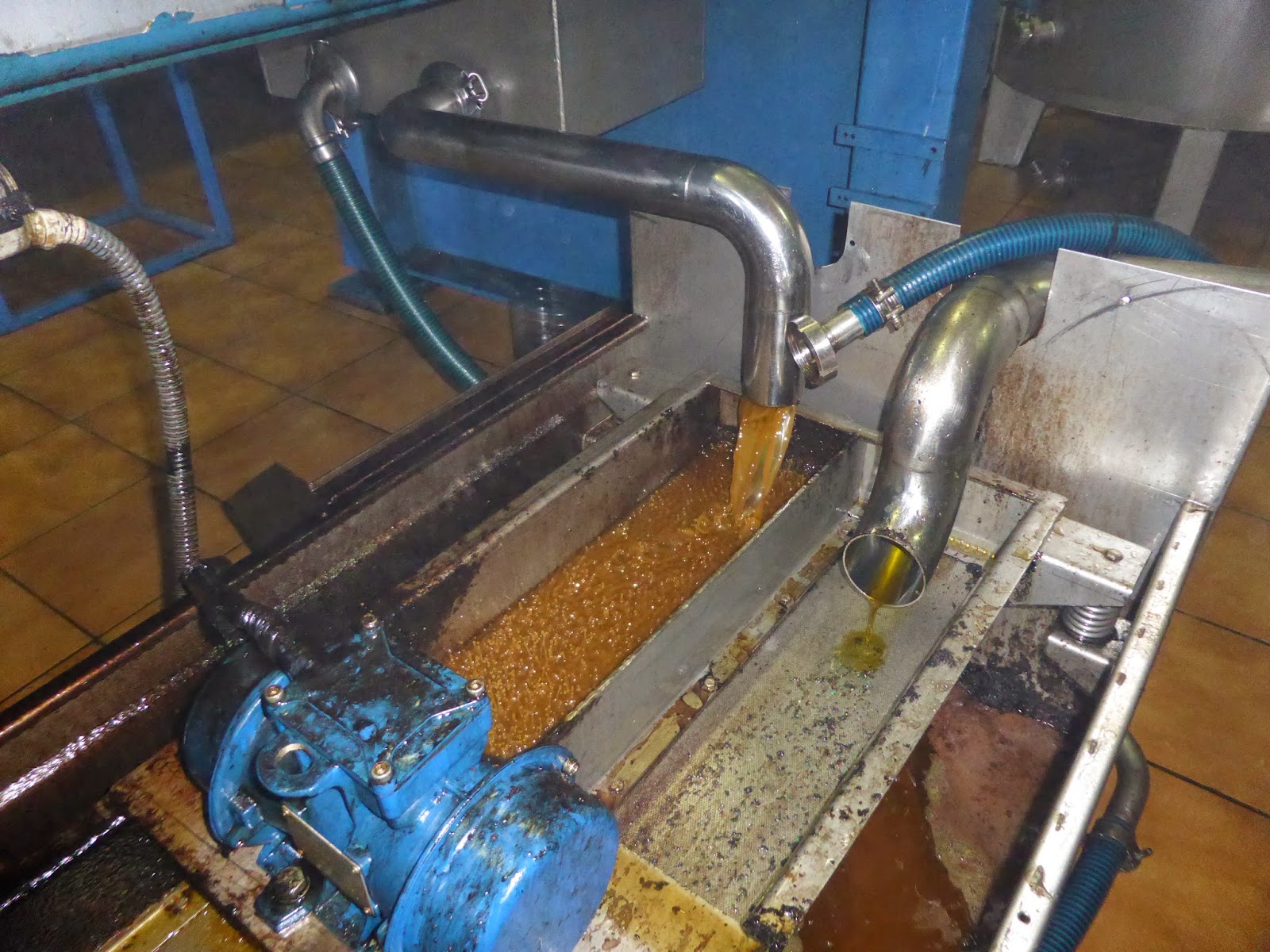 The first separation of the oil and water
The olives undergo two cycles of this mash/heating in this processor's before the oil is collected into racking tanks to allow the oil to stand and sediment to settle. 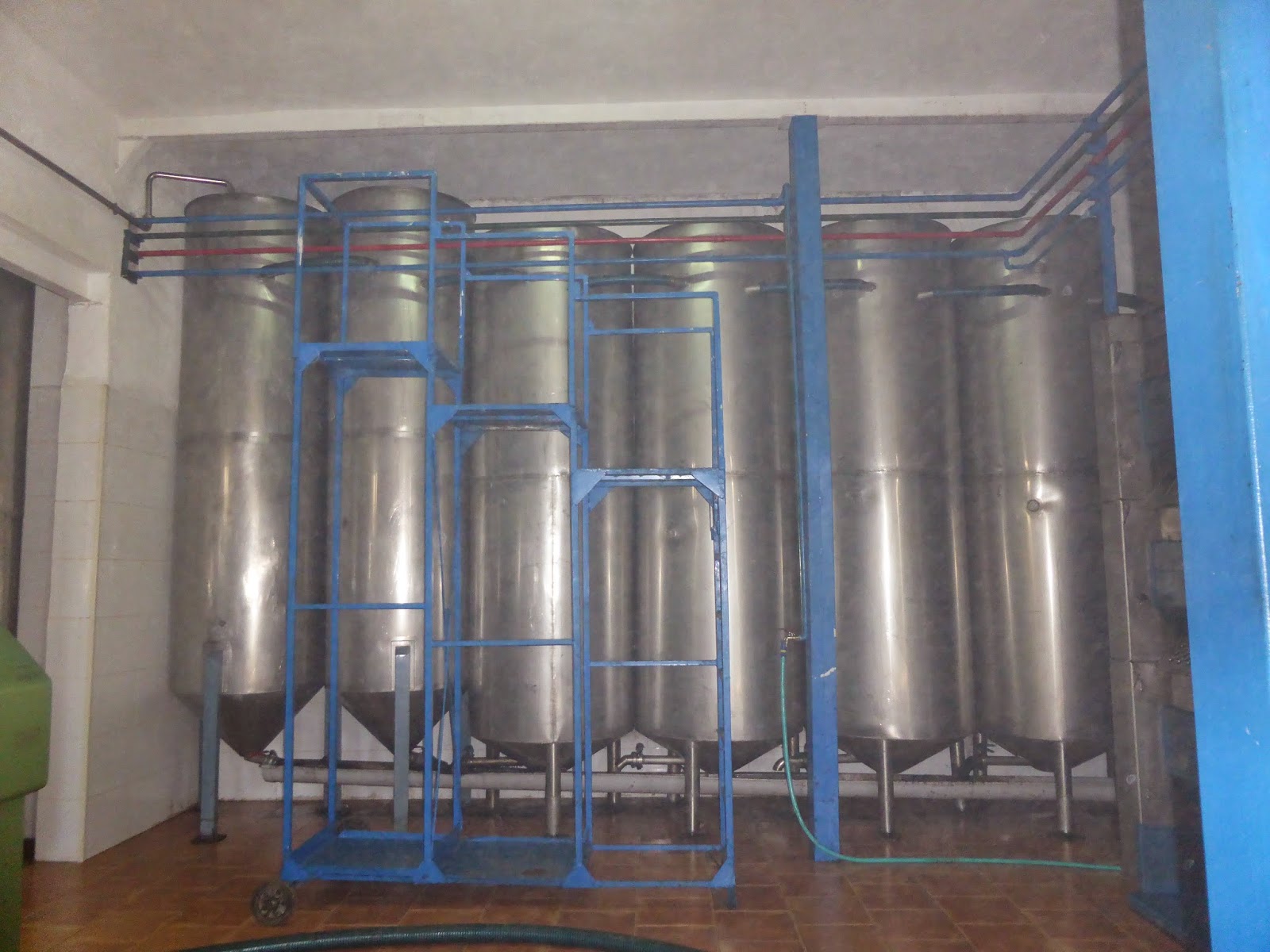 A series of racking tanks 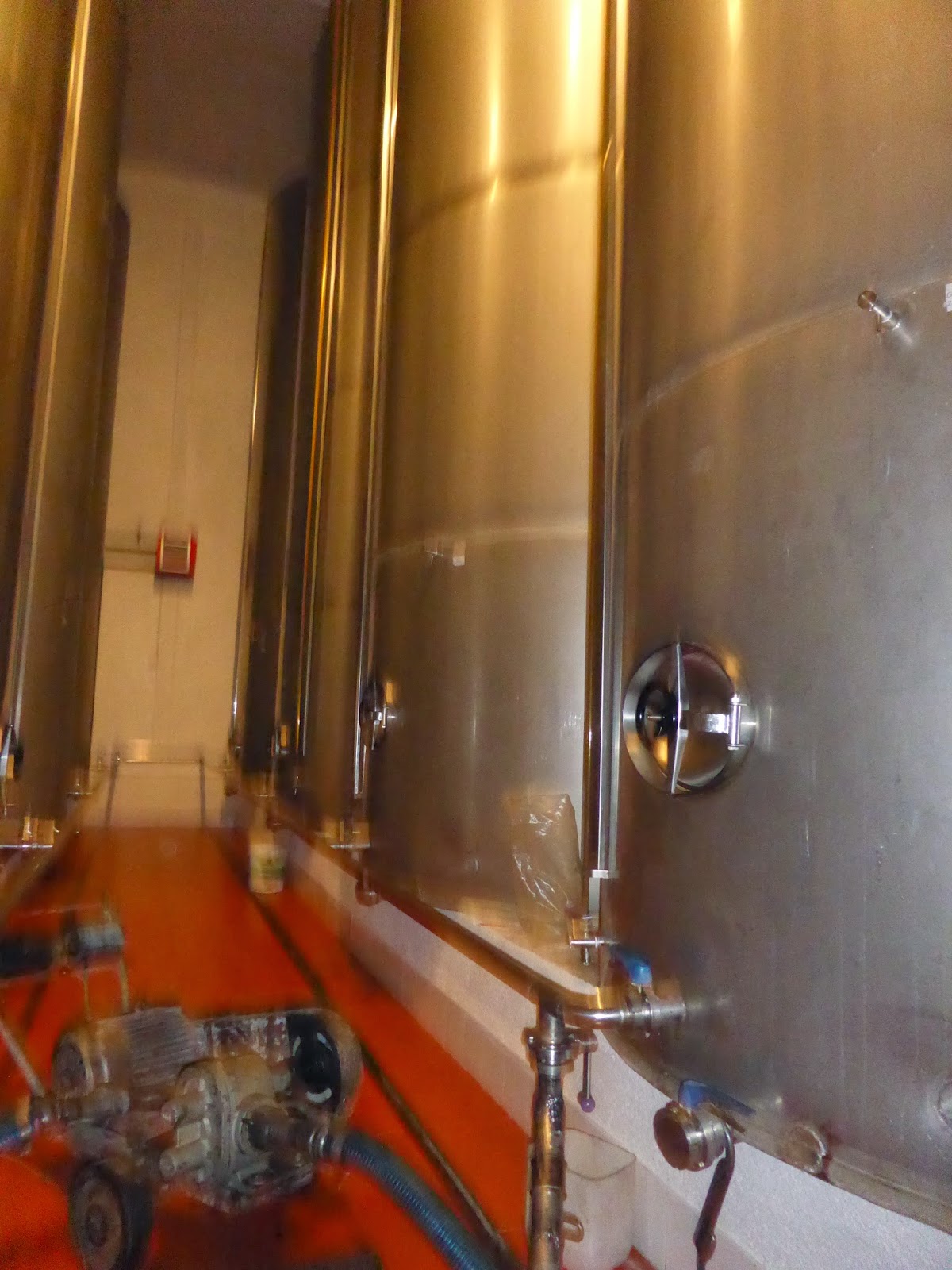 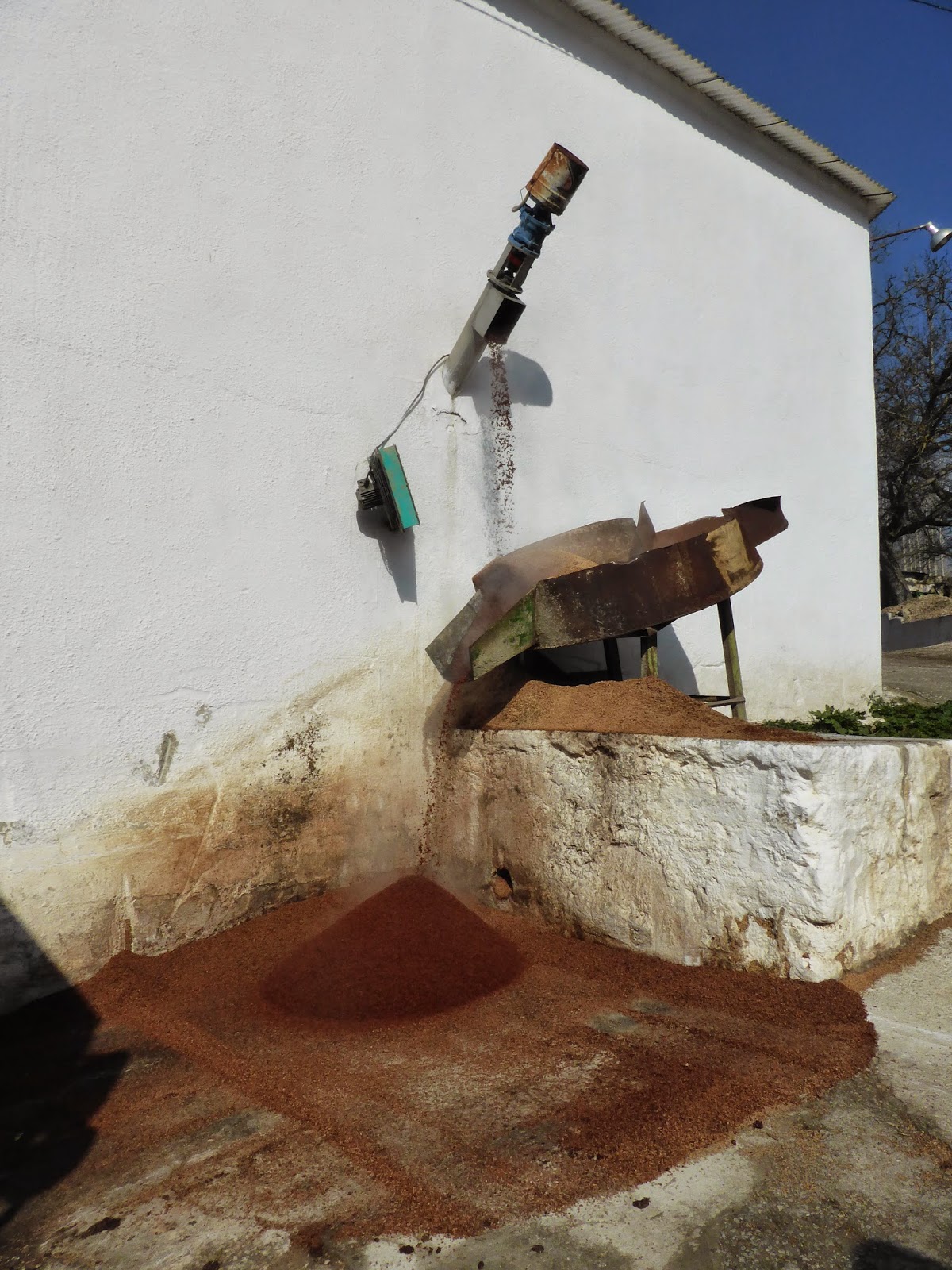 Olive pips being removed from the mash

The olive pips are a waste product that is now being used as a heat source with many households installing pellet boilers that burn the pips. 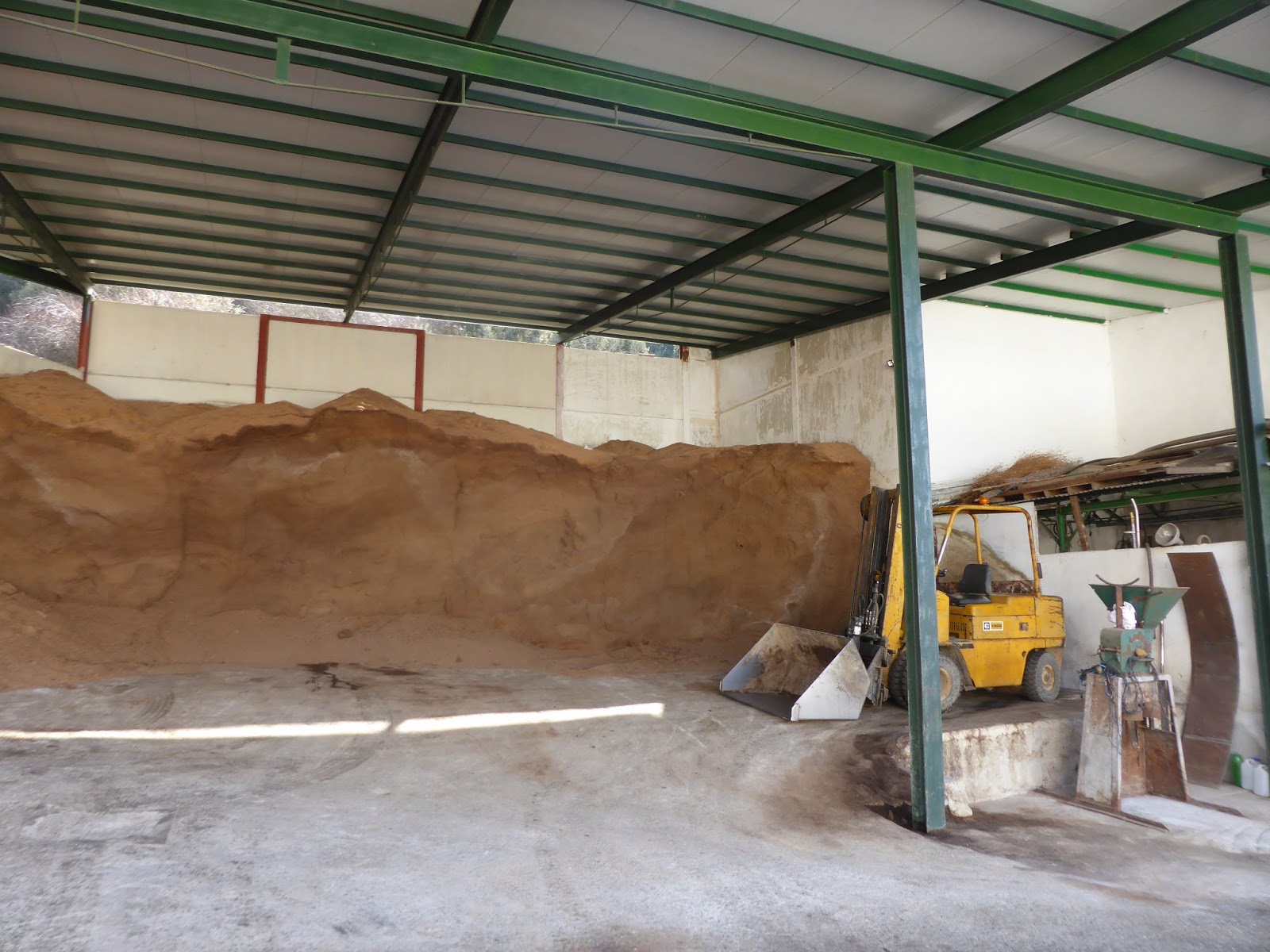 A barn set aside to store the olive pips before they are sold.
The residue of the 'mash' is sold on to other processors that extract the last of the oil chemically.
It was a very interesting tour around something that is not normally part of my day to day life and I am grateful to the lovely Jose for spending the time and Helen for making the effort to arrange the visit and accompany me.
Just one last thought...be aware that the olive harvest in the Mediterranean has been very poor this year so olive oil prices are about to rocket, and with that in mind I bought us a 5 litre supply.
Posted by Nb Yarwood at 15:27