BUILD DAY 106
Went down to the workshop early afternoon to partly assemble some steel shelving for under the tug deck. I had dismantled this when we moved house and kept it in storage as it took up very little space.  I will fit it when all the pipework under the deck has been finished.
There was a fair bit of activity but work in progress such a bench carpentry is not worth photographing, as the images would be meaningless.

Peter has pretty much finished wiring the fuse panel and inverter.
Stuart was installing the shower. If anyone has ever fitted one of these quadrant cubicles in a house, you will now how awkward it is to set the assembled frame over the shower tray.   In a narrowboat the height and width restrictions make it that bit harder. 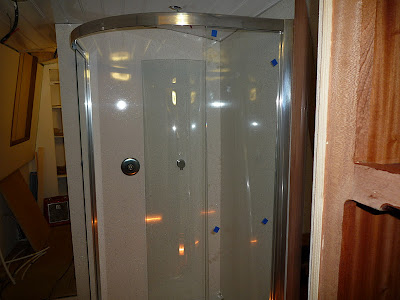