After our two nights in Bishop Street Basin in the heart of Coventry we took our leave on Friday morning.  We have been agreeable surprised by Coventry and the basin is almost perfect, almost... A Y shaped basin we chose to moor on the arm that was not hedged in by buildings and that was a mistake.  The mooring we opted for turned out to be a thoroughfare for late night drinkers on their way home so both nights were disturbed by inebriated, loud groups finishing off their evening.  The first night was a group of eastern Europeans sitting on a bench by the stern/back cabin of our boat.  At half one in the morning I lay in bed cursing Ted Heath for taking us into the Common Market and on the second night, having had some twat jump on the boat, Joe got up and dressed and went out and stood by the boat until the drunks had gone. 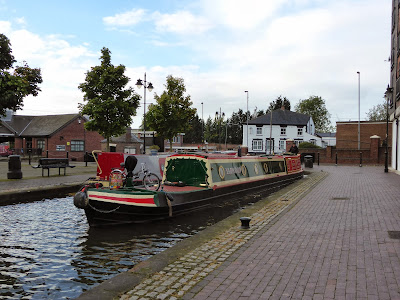 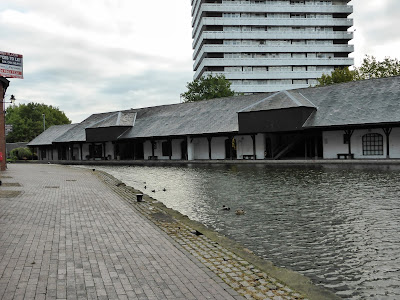 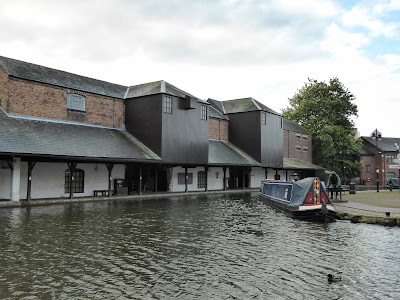 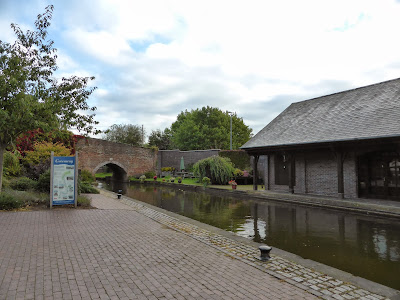 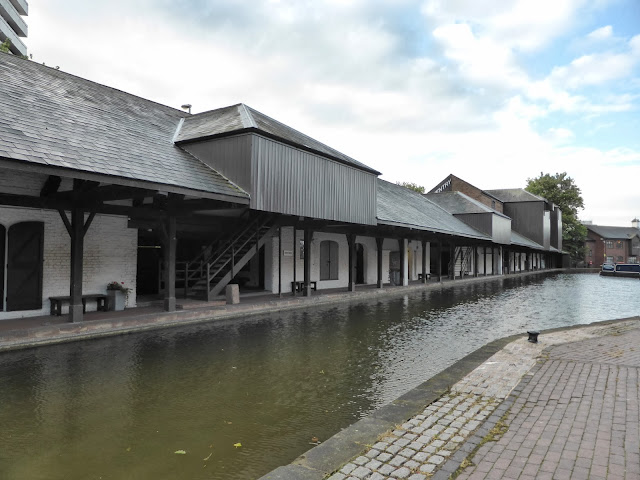 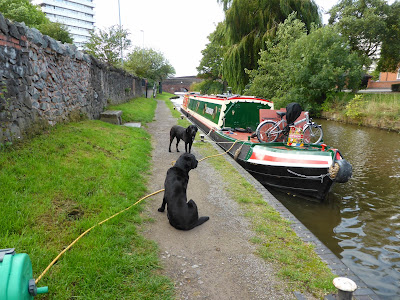 All services, including showers, are to be found within the basin bar water.. the two water points are canal side just outside the basin. We stopped and topped the tank. 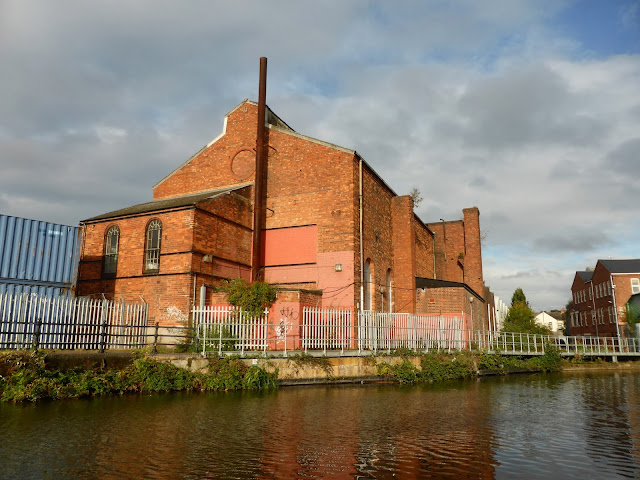 This is what remains of the Daimler works.  Daimler were the makers of the first production car in 1897 and the building above is the former Engine House. 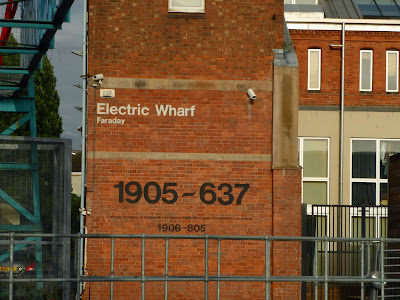 Immediately next door to the Daimler complex is the site of Coventry's first power station at Faraday Wharf. 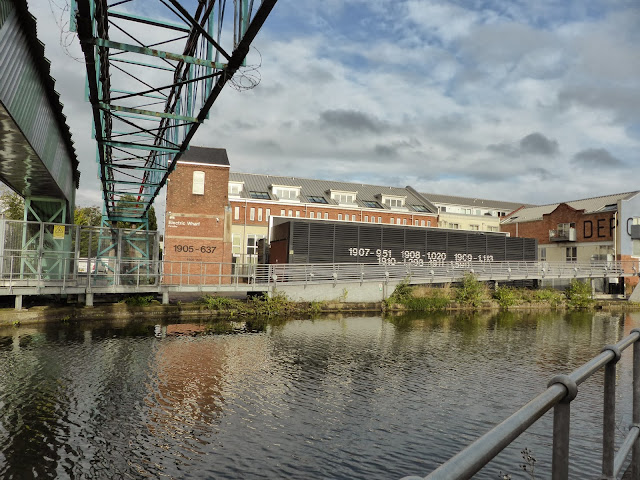 Faraday Wharf ideally situated for supply of coal by canal from the Ashby coal fields just along the canal.  The power station operated from 1896 to 1936.  The former power station has been converted into low energy eco homes and business units, preserving the industrial buildings. Over a period of years the Turbine hall, Generator hall and now the Cable yard have all been transformed. 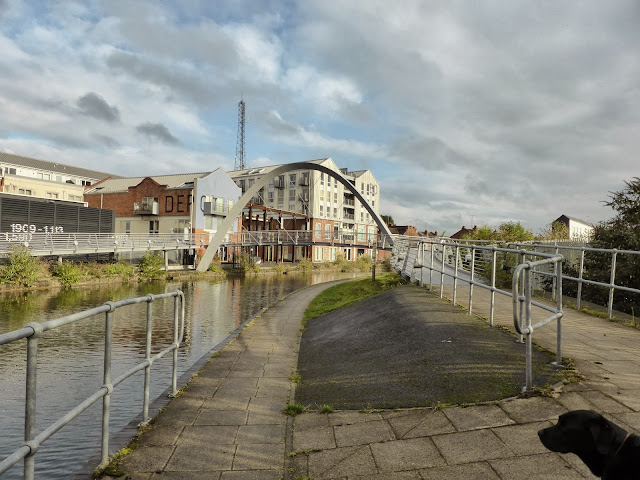 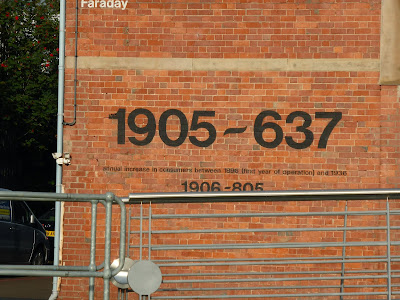 The figures painted on the walls are denoting the number of customers the power station supplied for any given year. 1905, 637 customers and 1906 it is up to 805 customers. 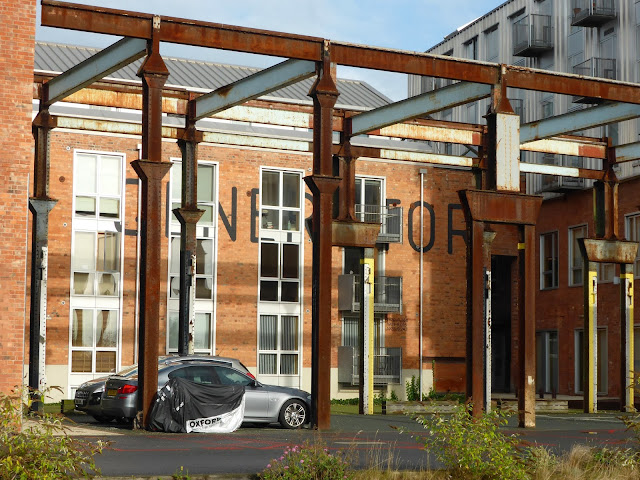 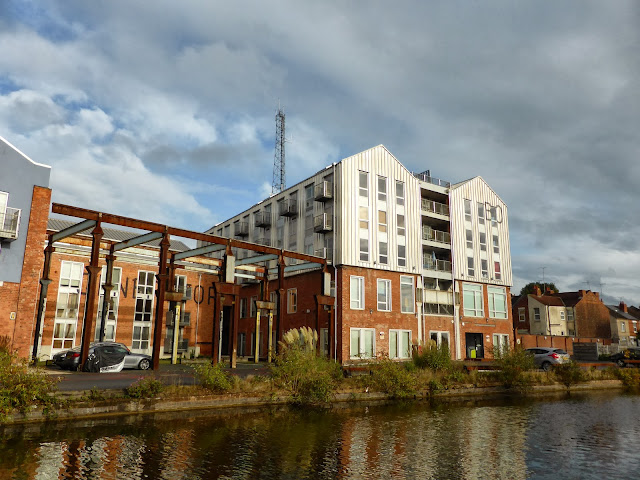 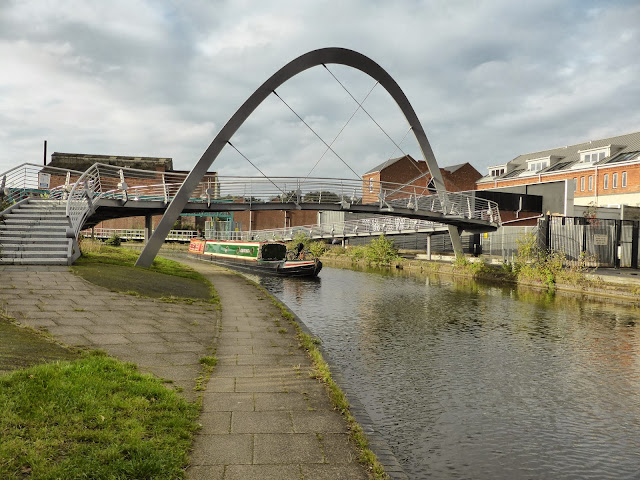 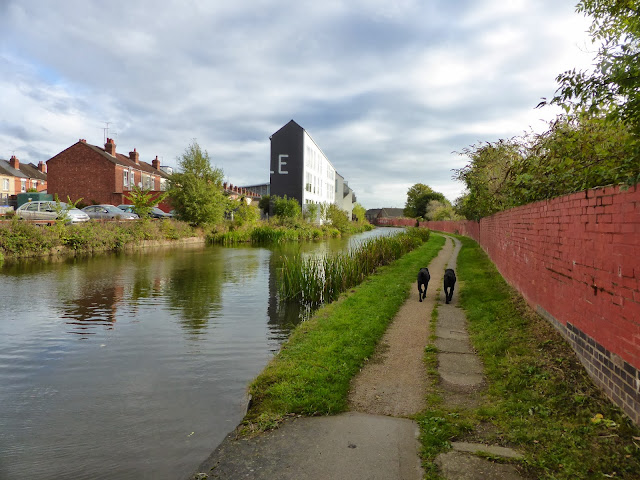 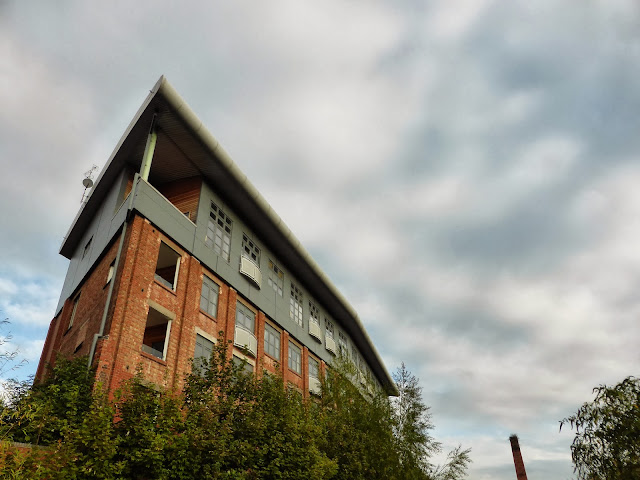 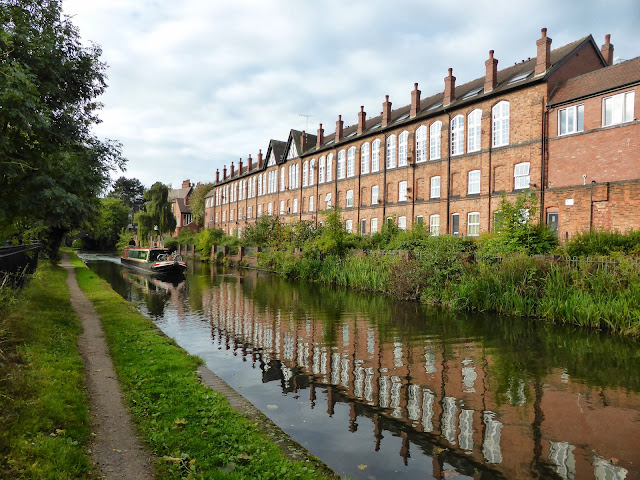 Cash's weavers houses
Just along from the former power station you pass this row od rather elegant houses.  The lower two floors were family accommodation and the upper floor was for weavers looms which were powered by a steam engine. Look at the size of the windows on the upper floor.  I would think that this was for silk weaving. 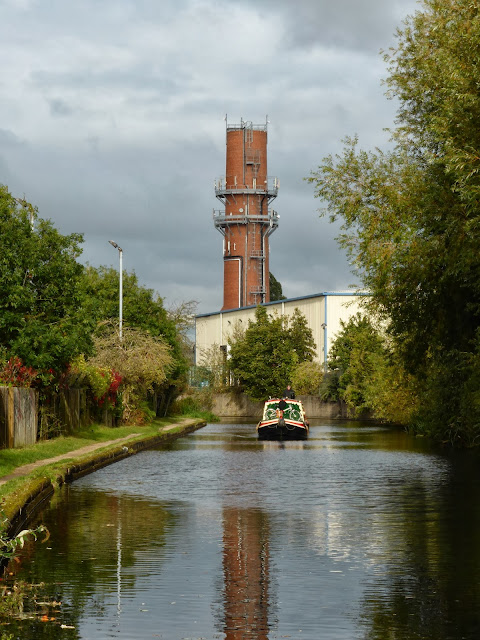 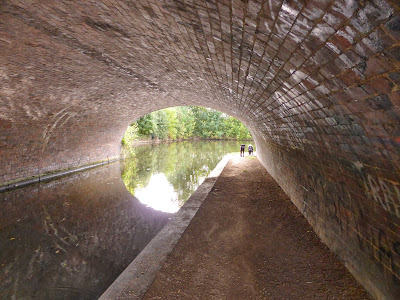 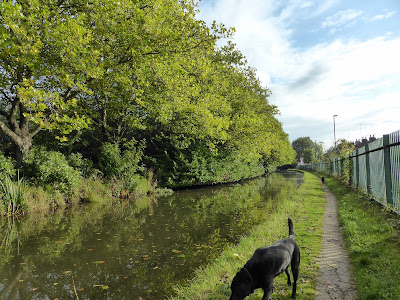 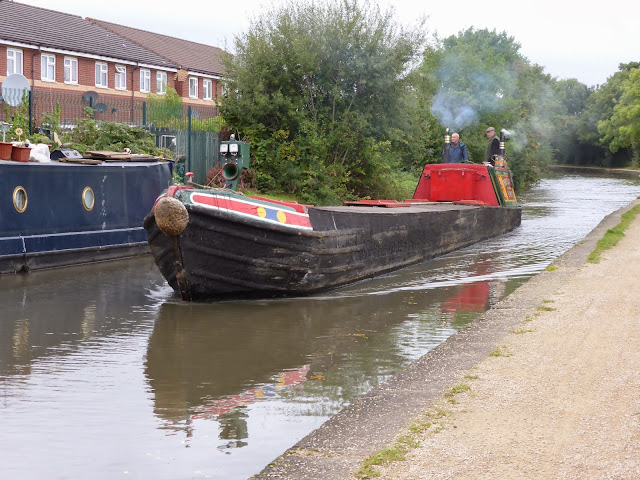 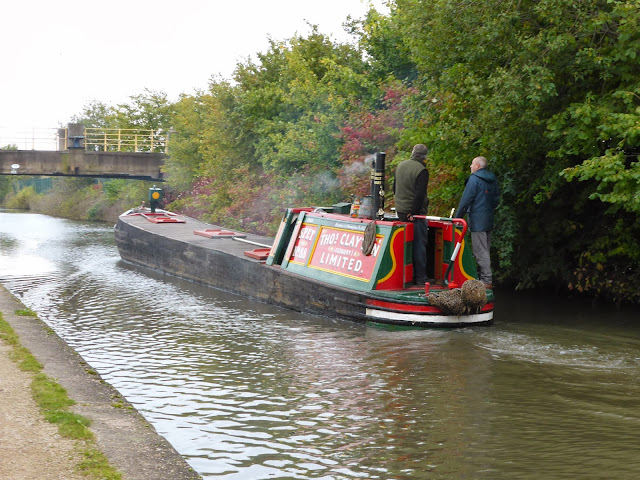 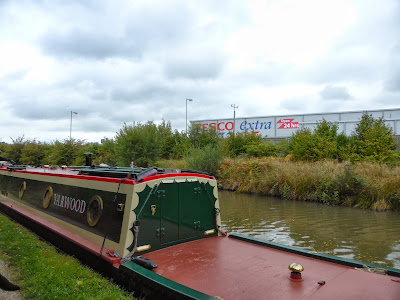 We stopped at bridge 8, conveniently close to Tesco's at the Ricoh trading estate, formerly Coventry's gas works. There we shopped until we dropped and restocked Yarwood's larder and wine cellar. 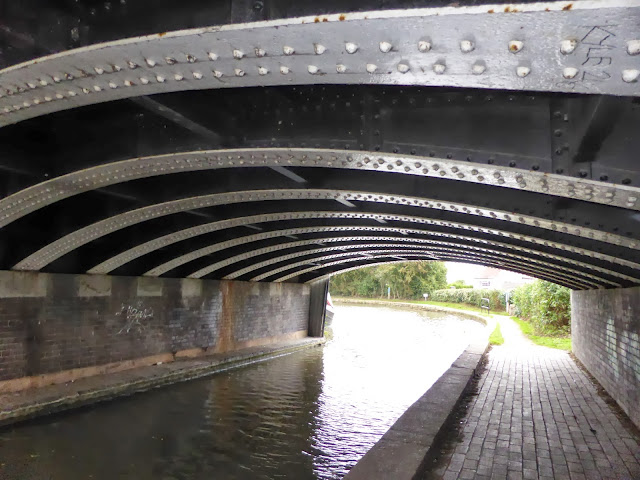 Longford Bridge looking towards the wide canal at the former Longford junction. 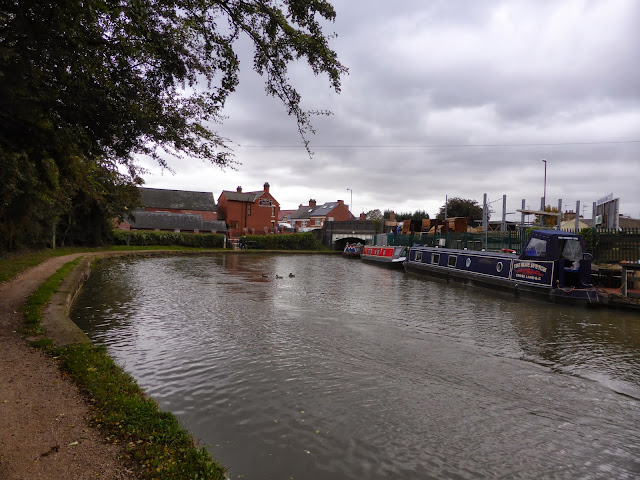 Formerly Longford Junction the original junction of the Coventry and Oxford canals - now at Hawkesbury Junction.  Where the boats are moored was formerly a wharf. 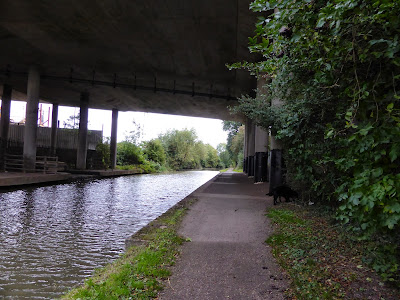 Going under the M6 motorway 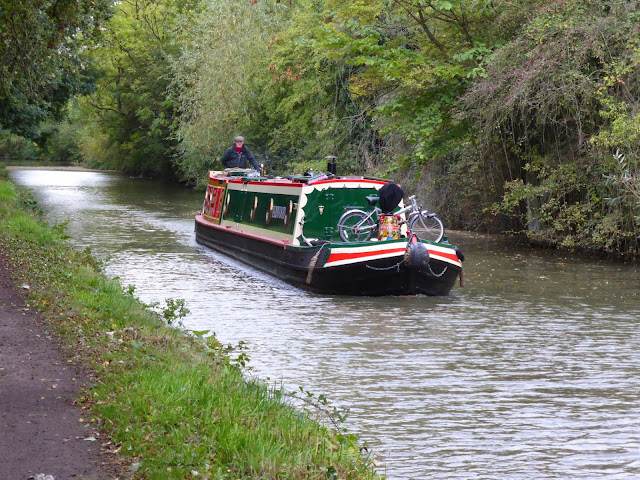 Moored below at Sutton Stop where we will stay for the weekend. 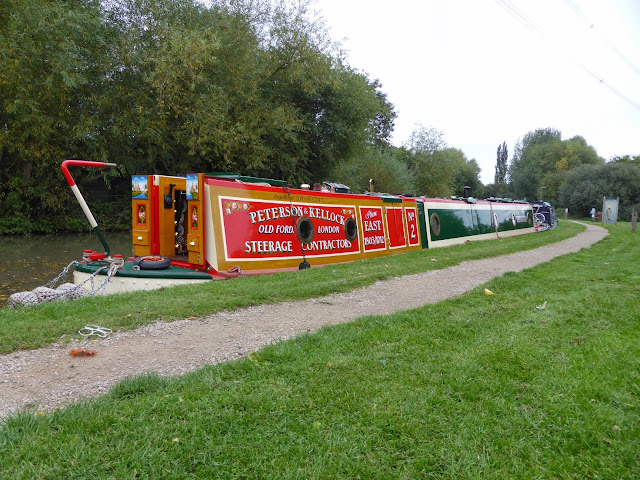