On To Leicester Line

Mid morning on Saturday I got a call from our stalker/friend David to say he had arrived in Braunston  and was at The Boat Inn.  We told him where Yarwood was moored and he joined us for a much needed cuppa after his journey from Norfolk.  We then awaited the arrival of Nb. What a Lark with David, Lisa and Amanda on board.
Moorings in Braunston were getting a bit tight but a boat length up from us was an 'abandoned' * Tupperware which sat in the middle of a space for two boats so out we went and untied said boat and gently shifted it along and re secured it and as we were nearly finished then bow of What a Lark came into view.
* unlicensed, unoccupied, stuffed with crap.

We all piled on to What a Lark and sat in the cratch/conservatory gossipping and drinking and demolishing bowls of olives and crisps.  We were soon joined by Tom from Nb. Waiouru, who was moored just along from us. 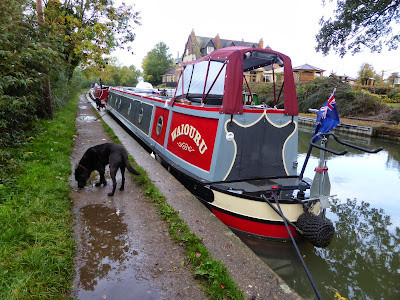 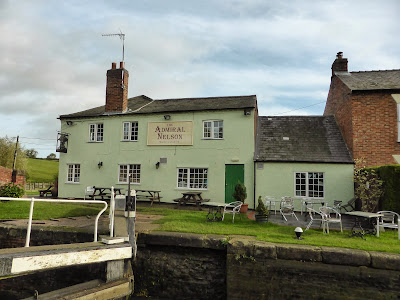 Admiral Nelson Braunston
Saturday evening the six of us went along the  Admiral Nelson pub for dinner, and what a dinner! Everyone was very impressed with the food and the service. A thoroughly enjoyable evening.
Come Sunday morning it was time to leave Braunston and provide David L, but especially Amanda, a narrowboat FIX.  They have yet to retire and get the boat of their dreams so they need to get their boating fixes where and when they can.  David L was going to steer What a Lark, leaving David C to prepare and cook Sunday lunch for the two crews.  Lisa, Amanda the dogs and myself worked the locks...the dogs supervised. 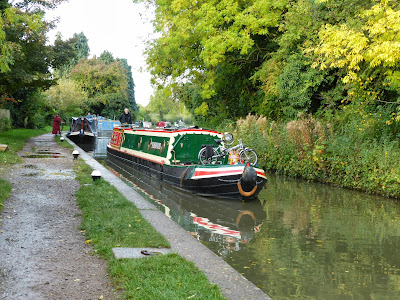 Yarwood serviced, off we go. 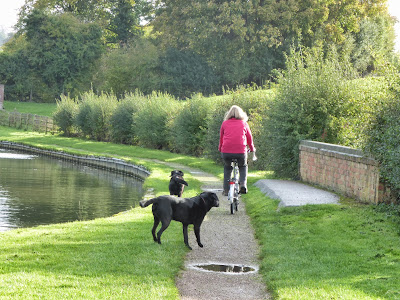 Amanda will be using my bicycle to return down the Braunston flight and retrieve her car so she is off up the flight test 'driving' the beast. 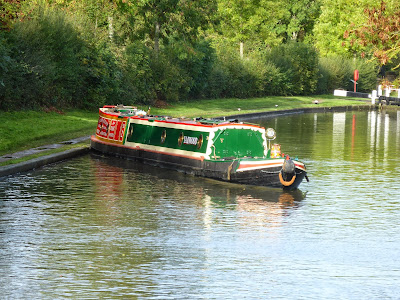 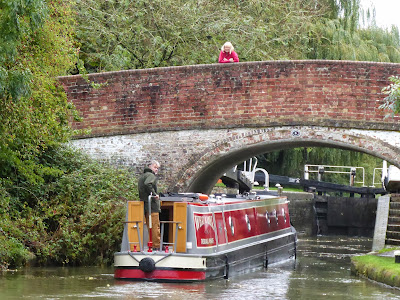 David L approaching a lock with  Amanda watching from the bridge 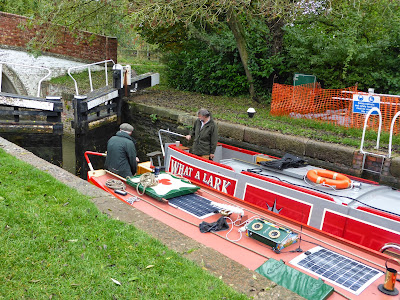 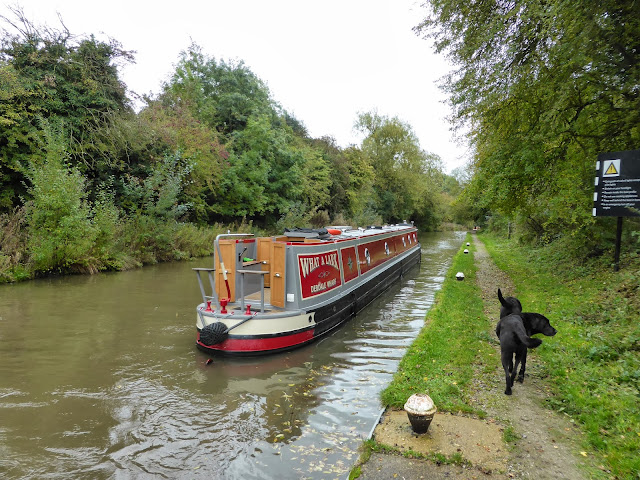 Not again, another Marie Celeste moment? 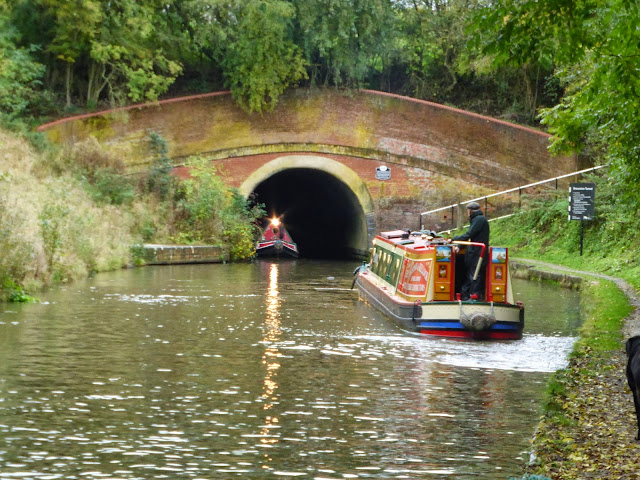 Yarwood holding off at the Braunston tunnel entrance
David C, Lisa myself and the dogs walked up over the tunnel and met the boats on the other side.  I continued my walk on to Norton Junction where the boats turned on to the Leicester line of the Grand Union and moored for lunch, a gin and tonic lunch. 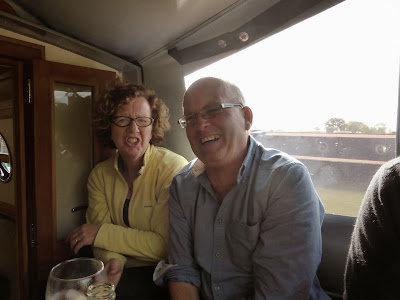 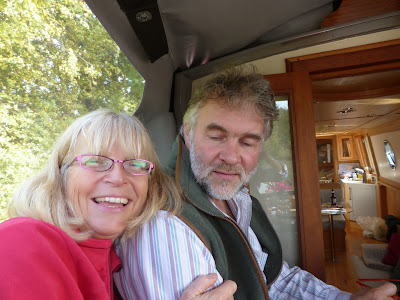 Amanda and David L, one gin down. 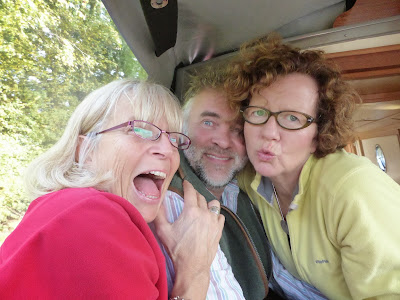 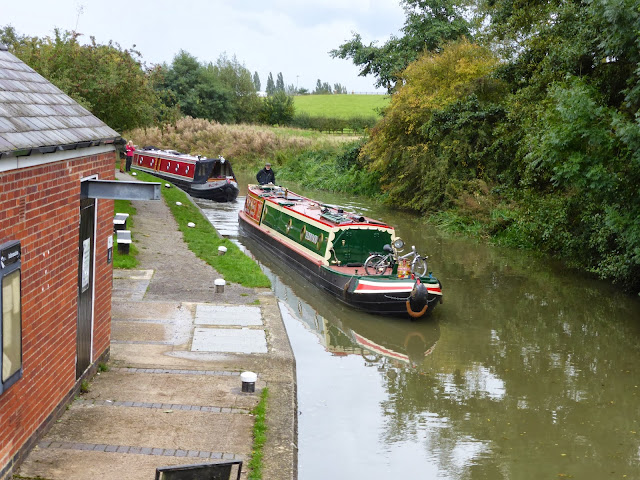 We moved off as the weather was still holding and arrived at the Watford locks where we were instructed to go straight up, no queues this time! 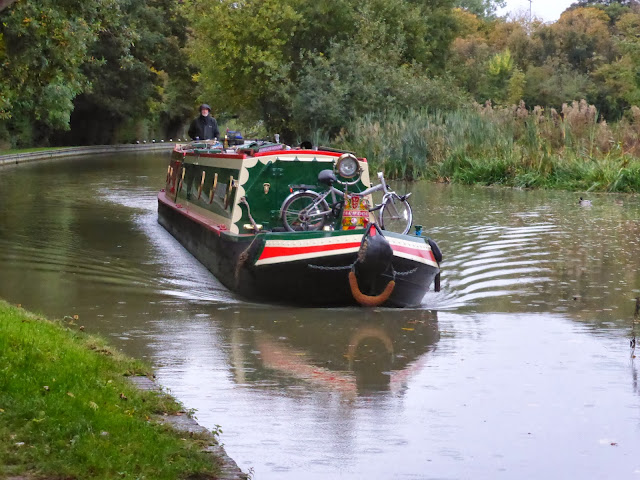 By the time we made the top of the flight the rain had just started, it is still at it as I type this, some 18 hours later,  and it seems we have a week of it to look forward to...never mind.

We moored above the locks just before bridge 8 and enjoyed a sumptuous Sunday feast aboard What a Lark before David L and Amanda had to take their leave of us and head off back to Norfolk.