A little balance and ballast

Yesterday we had the floor up in the back cabin, removed the multitude of items stored beneath the floor and hunted out the last of the ballast there, 47 engineering bricks.   250 or so bricks had already been removed a couple of days after launch as Yarwood had gone into the water a bit too stern down.

We have stacked the bricks on the tug deck temporarily until we can responsibly dispose of them - anyone need any bricks??
The next job was to trim the boat again and Joe did this by sticking a spirit level on the steerers step at the back (side to side) and moving a couple of the 56lb weights we carry for the purpose. 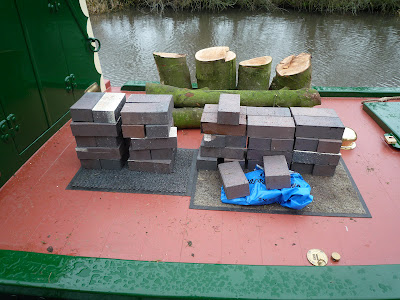 Unwanted ballast
While Himself was rummaging under the floor boards I tackled a bit of brass cleaning, one tunnel lamp.  I must have been inspired by Halfie's post of this morning on Brasso! 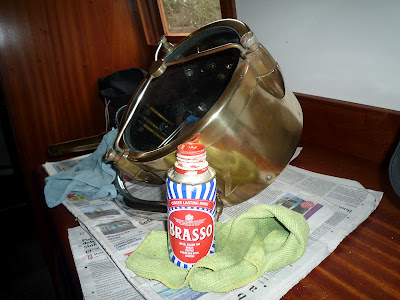 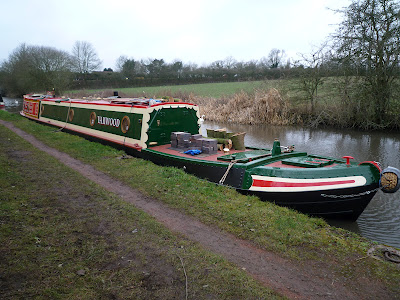 Tonight's mooring
After lunch we  decided to move Yarwood along to the visitor moorings away from the mild but persistent traffic noise of last night and while Joe set up the TV ariel I took the boys for a walk.
We also ran the genny today for the first time today using it to top up the battery bank, run the dishwasher and the vacuum cleaner (much mess mucking out the ballast).  We were very pleased, and relieved, that the genny can barely be heard from outside the boat, the cocooning and hospital silencer doing the job of suppressing the sound.  Our aim when having the genny fitted was obviously to supply Yarwood with the power we want but also that it didn't disturb others; that seems to have been achieved....
Posted by Nb Yarwood at 17:19