Those in favour of Tug decks, say Aye, those agin...


"Still undecided about this type of front deck it looks like a waste of space but each to their own."

The  boat built by our boat fitter, Barnowl Narrowboats, immediately after our first boat Caxton, was a trad boat with a a Gardner engine and a tug deck.  Like you I couldn't understand the attraction or the purpose of such a boat but less than three years later we find ourselves  commissioning a similar boat!

Once we were out there on the cut, every time we saw a tug style boat it drew the eye, there is something about its lines and how it sits in the water and one of the first of these tugs we clapped eyes on was Nb Kyle owned by Brian Jarrett. 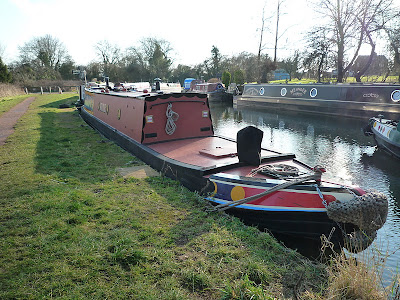 Nb Kyle
We were moored at Bugsworth basin when Nb. Kyle arrived and the following day yet another tug arrived, Kevin Blick with his tug, Nb Star.    But apart from our obvious attraction to the lines of a tug we remained convinced that this type of boat was impracticable, especially for liveaboard continuous cruisers.
As time passes, Joe starts to like the idea of an internal engine room, I grow to appreciate the value and practicality of a traditional back cabin and WE start to think about boat number two.

I want a tug, Joe thinks tugs are a waste of space; impasse reached.

The change of heart came when Joe agreed that he wanted the looks and lines of a tug but couldn't overcome his reservations about how we could make it work.    Lesley, that would be me, saw  a glimpse of light ..
We walked from stem to stern in Caxton and identified what things were essential to our roaming life on the cut and where they could be housed on a tug style boat... amazingly we identified homes for everything bar the home for dirty linen. (since rectified).  The reservations melted away and we started to draw up detailed plans on the back of discarded fag packets..a 58 footer or a 70 footer?
We worked out how we could afford to build another boat and pressed the GO button...
Yarwood went into build
.
Under that 'waste-of-space-tug-deck' is;
And also under the tug deck but accessible from the saloon are:

We have yet to experience  living with a tug deck but we believe that we have made what is desirable to us, tug lines, as practical as possible for our needs.
Time will tell of course.
Posted by Nb Yarwood at 09:42