We left the River Little Ouse this morning, blue sky, fluffy clouds and warm sunshine accompanying us all the way down stream to The Ship where we turned left up the Great Ouse to Littleport.   We managed to secure a mooring on the EA moorings alongside The Swan.  It must be karma because we arrived at lunch time and felt we had to have a pint to celebrate... 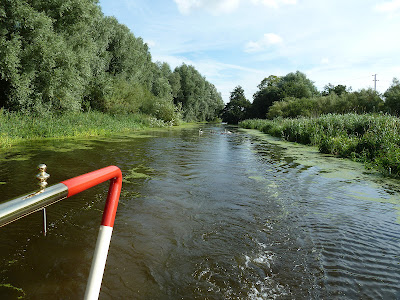 Farewell Little Ouse
As we were mooring up there was a group of people, perhaps 40-50 of them, walking along the flood bank with a banner held high in front of them.  The banner said, Latin Mass Society  (LMS) and from the pub patio we could hear chanting/singing.  I looked up the LMS and found that the group were on a three day pilgrimage to Walsingham in Norfolk and that the Society had been formed in 1965 when the Catholic church ditched Latin in favour of the native language of country they were operating in.
The singers/chanters were practising in Latin and so absorbed that they failed to notice that their kids were bored witless and wandering along the moorings outside the pub.  I called their attention to a little girl of perhaps three who was climbing over mooring lines and heading of into the great unknown; an accident waiting to happen and I think we have seen enough of little folk losing their lives in water this year.  Anyway, child recovered, the singers soon left and I was free to watch the boats on the river. 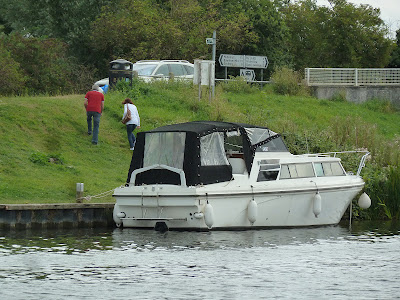 Securely moored ON the Water Point
This boat caught my attention.
I watched them moor up alongside the water point.  He secured the boat and then he climbed on the front of the boat and dropped the anchor?  He then went and unlocked the water point and filled a plastic bottle with water returned it to the cruiser and then climbed out of the boat, along with his wife, and cleared off.
Am I living on a different planet or is boating etiquette on EA waters so very different from the canals?
Posted by Nb Yarwood at 14:33