Exit, One and half tons

I woke yesterday morning and had a thought, the one-a-day ration came early....

We could give Stuart, our boat builder, a call about getting more ballast off of Yarwood, us being at Hopwood would enable him to get his van close to the boat.   Stuart happily agreed and said he would be with us in a couple of hours.   Joe then reversed Yarwood onto the water point, we filled the tank and washed down one side of the boat before reversing through the bridge onto a mooring near a lay by.  We were just tying up when Stuart arrived.
They, Joe and Stuart, started by moving the washing machine and tumble dryer to get at the ballast beneath and then moved backwards into the saloon to get at yet more ballast.  I removed myself and the dogs for an hour, leaving them to it. 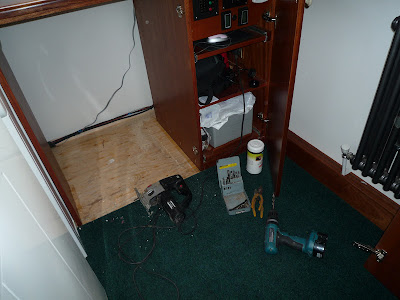 Exit tumble dryer, the floor is about to come up to get at the engineering bricks beneath.
Stuart removed bricks and Joe loaded them onto the adjacent van.   We have now removed upwards of one and half ton bringing the boat up two/three inches.   I measured the draught (how much Yarwood sits in the water) and we are now at 25.5 inches.
Ballast gone, we moved off again northwards and moored beyond the official visitor moorings away from other boaters because we now planned to use the chain saw and cut up the wood we had gathered on Tuesday. 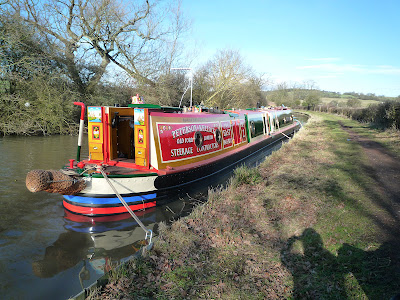 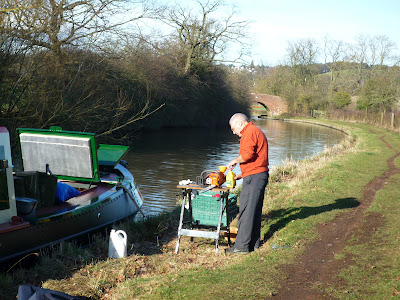 Joe preparing the chain saw for its first outing for some time...
We spent a couple hours in the glorious sunshine cutting wood, talking to passersby and their dogs and clearing up towpath and boat. 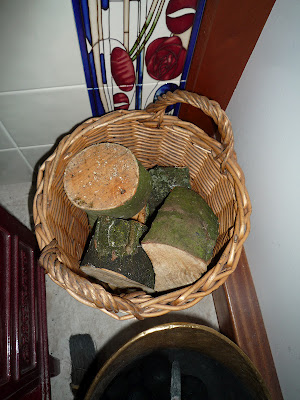 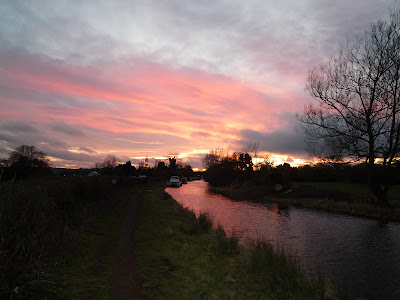 Sunset over the cut as we walk to the pub
And after all that was done and boys had had another walk Himself decided it was time for a pint at the Local,  Hopwood House,  and I of course had to support that decision and accompany him...loyalty or what?
Posted by Nb Yarwood at 09:53