Like the rest of the canal boat fraternity, we have been iced in.   The saving grace for us is that we were still moored at Alvechurch with shore power and handy car when the big freeze hit.   We have booked our temporary mooring here for a further week which should see us through this cold snap and the visitation of longtime friend, Valerie Ann.   Himself  is away today to Lincolnshire, dumping unwanted kit into storage, picking up 'needed' kit from storage,.. and Valerie Ann.
We keep the wheels until Friday, when Val goes home and so does the car..Saturday onwards we regain our 'normal' lives after the boat build, continuously cruising again... 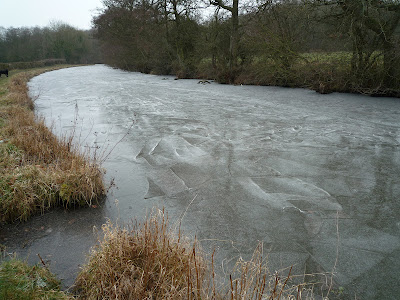 Saturday morning, the cut is refrozen after two Anglo Welsh boats came thru on Friday
We wake to discover that the water pipes on Yarwood are frozen so and we  have no running water aboard.  Shore-power  comes into it's own and Joe plugs  in a cheap halogen heater we bought last year in the extended winter freeze and leaves it to do it's thing in the hold.   After an hour we have running water again.
There then follows a  trip to Screw-fix to buy some pipe insulation.
Next morning, still locked down in ice, the alarm on the central heating goes off.
Overheating, Overheating switch me off or risk a nuclear incident!!  (well something like that anyway..)
*!** what next? says Himself
It turns out to be no more than an airlock and Joe soon has that resolved. 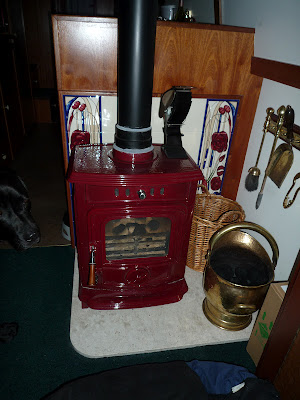 Yarwood's Lilliking stove
Which brings me to the next little old issue..

Bear in mind that  we are used to the stove aboard Caxton..which is an Aarrow Ecoburn that was so efficient, so effective that even in the harshest of winter conditions, it kept the boat warm with very little assistance from the central heating.
So, given that experience, we couldn't  understand why the new fire aboard Yarwood so 'bloody' useless..It was consuming coal at an alarming rate, producing very little heat and we were having to run the central heating to keep warm.  Frankly we started to think we had bought a 'pup', which is an expensive mistake to make...  We even started to contemplate having the new stove removed and getting another Aarrow to replace it; that was until our boat fitter Stuart Harper (Barnowl Narrowboats) spotted the likely problem, a missing section of stove rope that was allowing the draft to bypass the fuel.
Today I bought a length of stove rope and fitted it - yes, I fitted it all by myself - and now the stove is performing brilliantly!!  We have a warm boat!!! 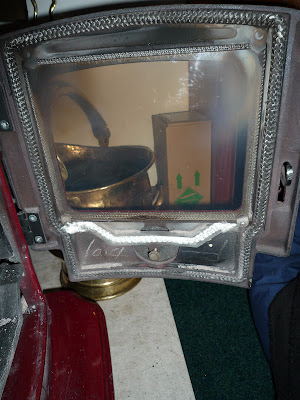