Walking the Ivel and others 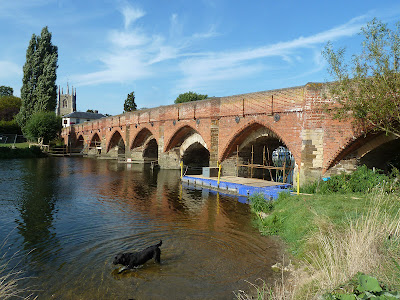 Great Barford Bridge
Saturday Graham, Jill and I took a  quick trip into Bedford by car to raid Tesco's.  Once loaded up with provender we headed back to Gt. Barford with the satnav insisting we head for "Gee Tee Baa Baa Baa BARFORD!"  Much hilarity in the car with a range of very unconvincing northern accents shouting Baa, baa, baaFORD! to accompany all changes of direction.
With the shopping stuffed into any available space, the table and chairs came out and we settled to read the paper, do the crossword and drink tea in the sunshine...
We loaded Jill into her kayak and she buggered off up a creek for a couple of hours and the rest of us sat and drank yet more tea and scoffed jam doughnuts. 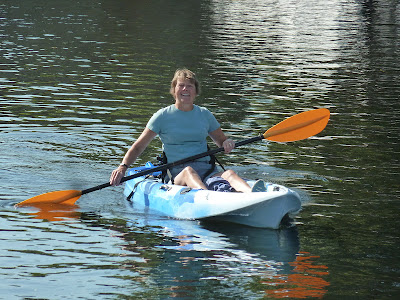 The budd-mobile..Jill returning from yet another sortie up the creek - have we saved her a doughnut? 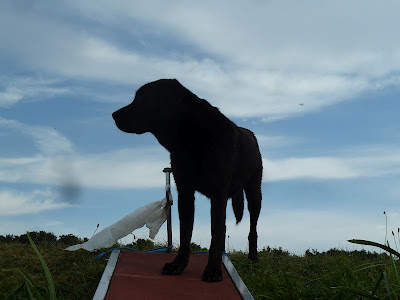 Fletcher returning from one of his sorties..the silhouette on top of the boarding plank - he didn't get a doughnut!
On Sunday we were due to receive visitors, the Windsong crew including new member, little Ozzy the Cocker Spaniel.  Pip called early in the morning to say that Ozzy was ill and they needed to get him back to the vet.  A text message later in the day updated me with the fact that they were now on their way to see a veterinary specialist in Birmingham.  So it's fingers crossed here for the little guy and hoping all goes well for him, and Pip and Roger.
With no visitors and heavy cloud cover we decided to abandon thoughts of a BBQ.    Jill planned a route march to and along the River Ivel, an old stamping ground of her early childhood, and I was dragged along for company.
First, find Blunham Village, then the river.


The church in the village of Blunham
Ah, our first sight of the River Ivel, just below Blunham village
R. Ivel...it doesn't disappoint, quite beautiful


Blunham bridge in the background and Jill, she NOT of the photographic memory, takes a photo of the information board.
River Ivel information.
The source of the River Ivel is at Ivel Springs in North Hertfordshire, on the outskirts of
Baldock. The River Ivel flows in a generally north direction for 20 miles past
Biggleswade and Sandy before joining the River Great Ouse at Tempsford, 6 miles
east of Bedford.

The River Ivel was made navigable between Tempsford and Biggleswade in 1758. Goods
such as timber and coal were shipped from Newcastle to King's Lynn where they were
transferred onto barges or 'lighters'. The lighters were then drawn by horses along the River
Great Ouse and the River Ivel, with the goods being delivered to the many wharves on the
way. The lighters returned to King's Lynn with flour, grain and vegetables. In 1823 the
Navigation was extended from Biggleswade to Shefford.
Many new structures were required along the river, including locks, tow paths, wharves and
bridges. Where water mills obstructed the passage of the lighters, as at Blunham and
Holme, by-pass channels were dug and bridges constructed.
Until the 1850's business on the Navigation thrived as the primary means of transporting
goods to and from the Ivel valley.
But trade rapidly declined after the arrival of the railway and in 1876, the Navigation was
closed by the 'Ivel Navigation Abandonment Act', with debts of £14,350.
The River Ivel from High Bamper Bridge
Posted by Nb Yarwood at 00:06