Going Down to the River 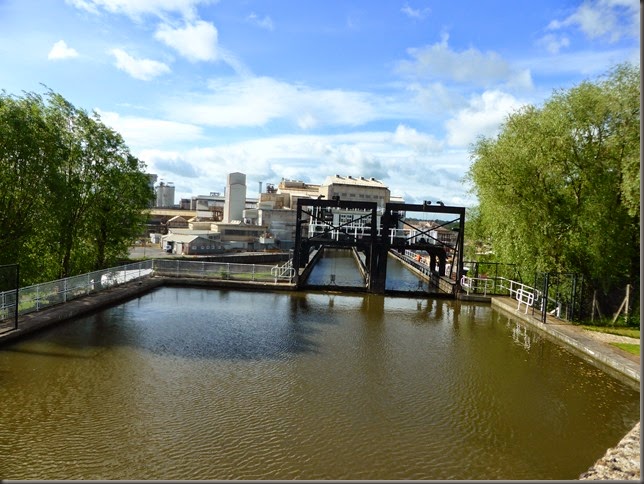 Trent and Mersey canal entrance to the Anderton Boat lift.  You are looking at the holding basin in the foreground and the black structure is the guillotine gates that lock off the access the aqueduct to the lift.

We went along to the booking office Tuesday afternoon and arranged our passage/transit down to the River Weaver. There is a £5 fee to book your passage but a turn up, moor up hang around option is free of charge?  Apparently when this magnificent boat lift was renovated some years ago at something like £7million I am told that British Waterways applied a £15 charge each way…result uproar, further result, toll completely rescinded.  Well I think that it is time to put a toll back C&RT but a reasonable one of say £5 return, and call it a toll, not an admin fee. Something as magnificent as this piece of engineering, working engineering at that, is worth paying for and I can’t think that many boaters would object to contributing directly to its continued existence and maintenance. 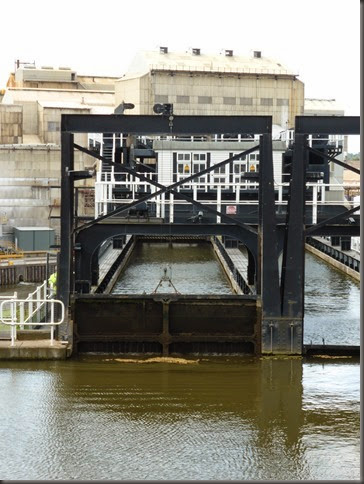 Here the guillotine gate is being raised to allow Nb. Yarwood and Nb. Ivy to enter the aqueduct 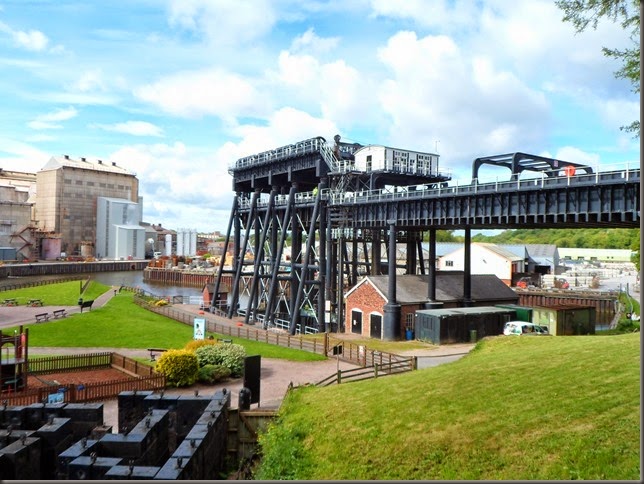 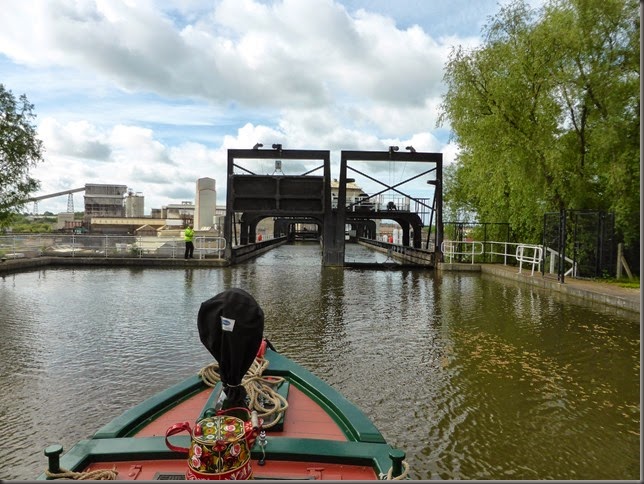 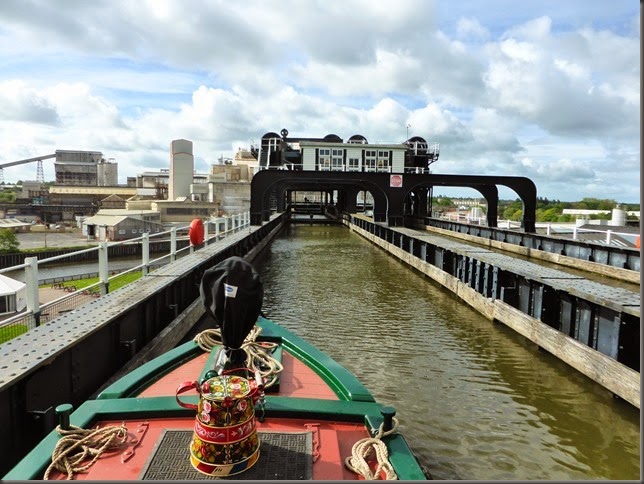 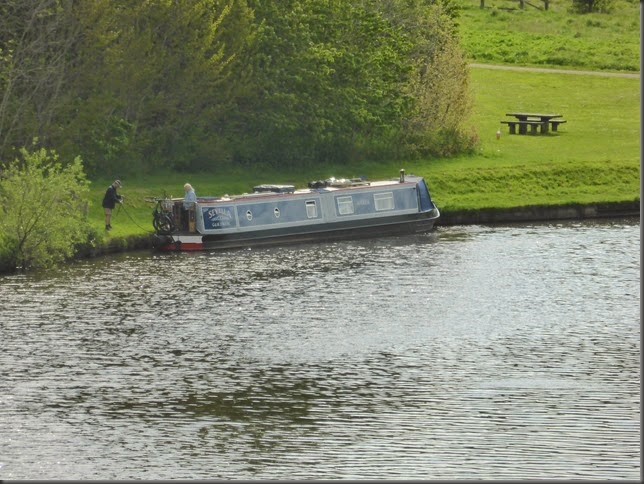 From my vantage point on the boat lift 70 feet in the air I spotted Mags and Geoff tying NB Seyella up.  They had just moved round from their overnight mooring to see us descend. 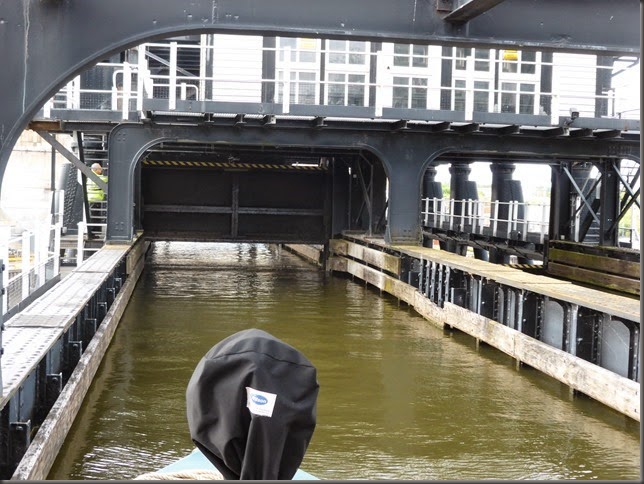 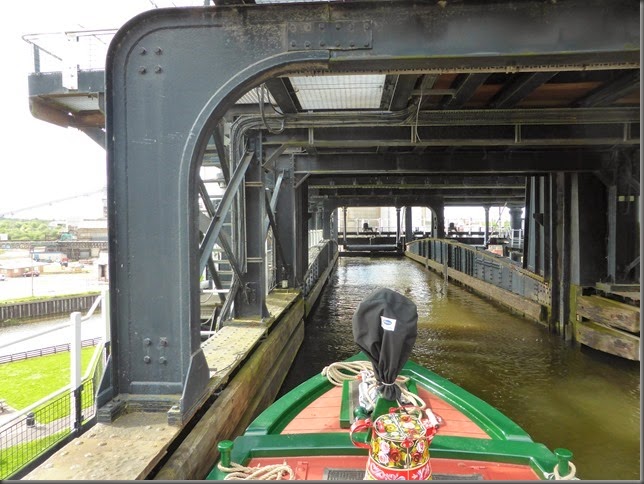 Moving into the caisson 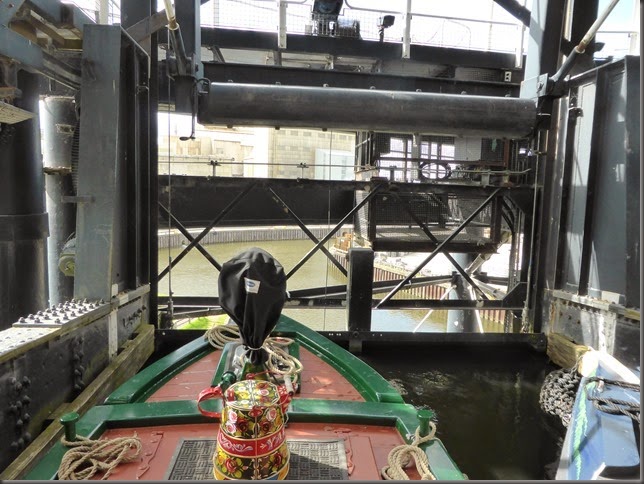 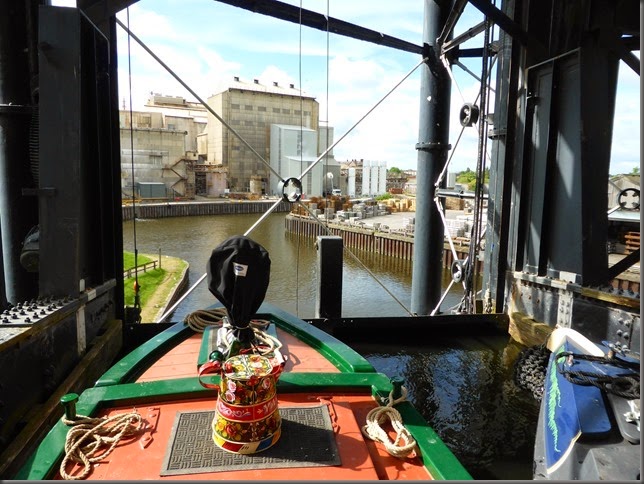 And here we start our slow hydraulically controlled descent 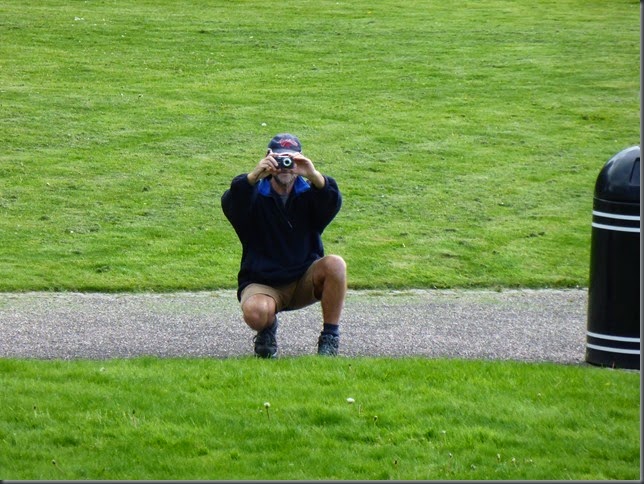 Geoff taking photo’s of us 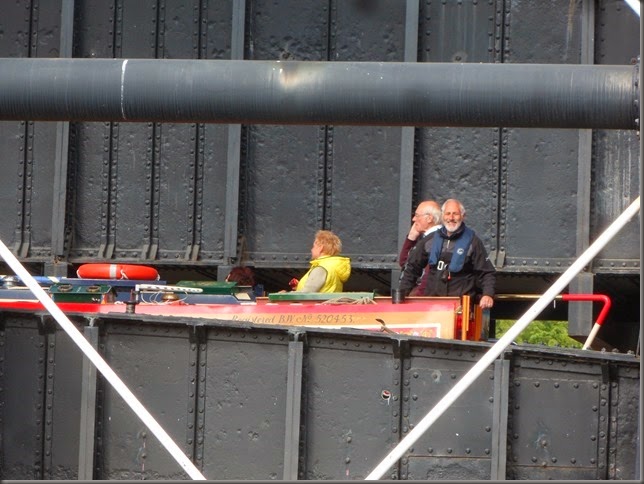 Joe on the back of the boat as we are lowered.  The boat with us on the descent was Nb Ivy owned by a Russian gent who keeps it on the BCN until he has visitors, from Ukraine and Russia to form a crew then he takes it out cruising. 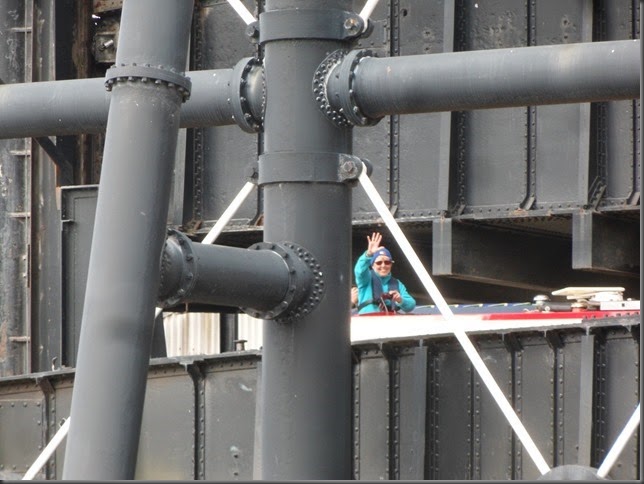 That would be me, well wrapped up and trussed by my life jacket, on the tug deck 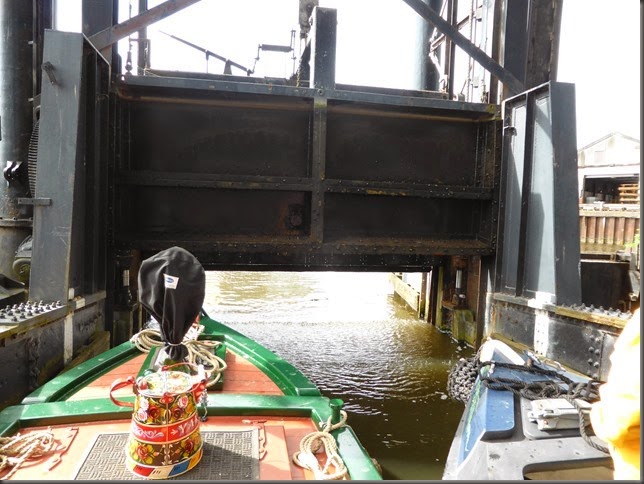 We are now at river level and the gate at the front of the caisson is rising to allow us out onto the R. Weaver 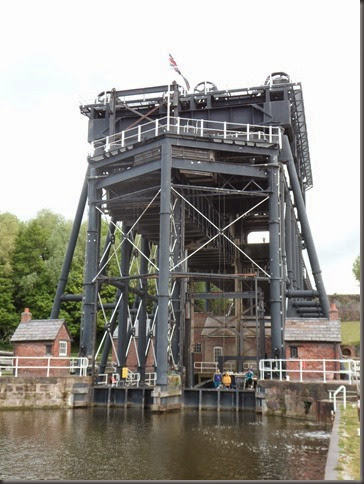 From Geoff’s viewpoint as the caisson reaches river level 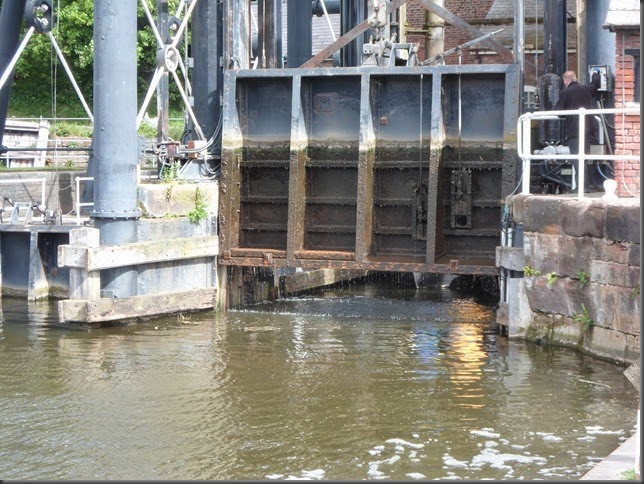 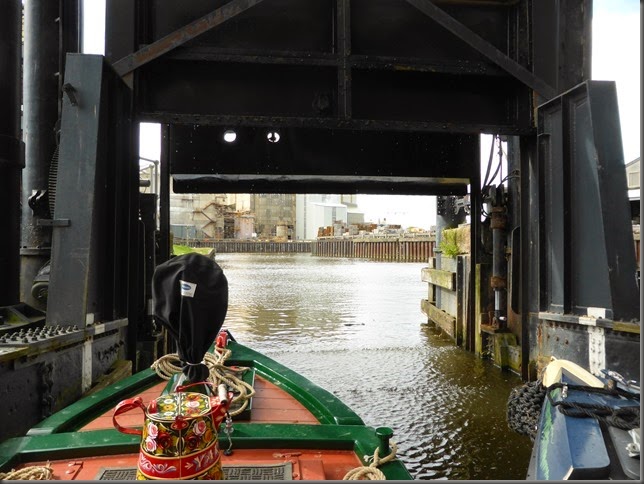 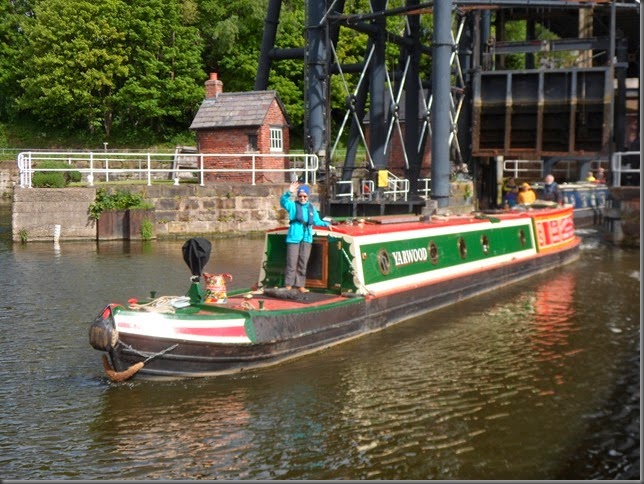 On to the River we go 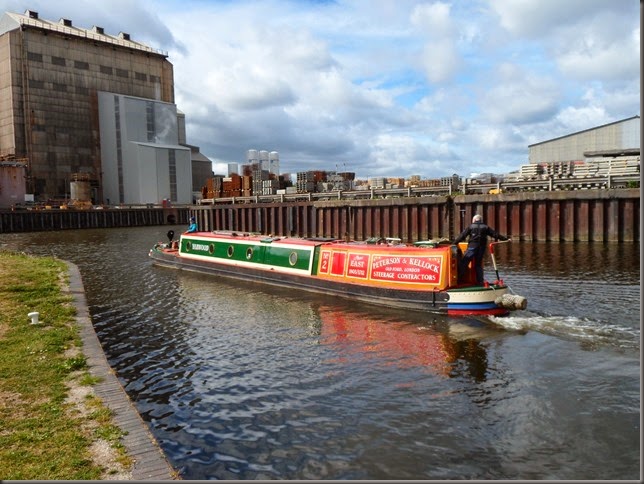 Hard left to join Nb. Seyella at their mooring 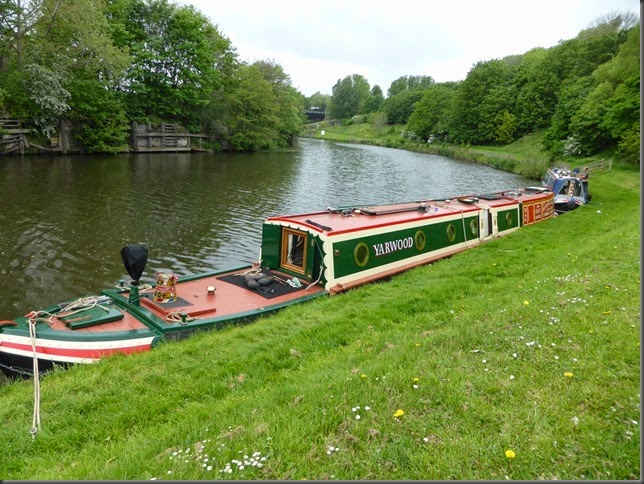 Moored in front of Nb. Seyella at Northwich Country Park