To Gurnett Aqueduct following an Idiot

We left our weekend mooring a Four Lane Ends at 7.30am Monday morning and headed off in bright sunshine towards our next planned stop just pass Macclesfield at Gurnett Aqueduct.   This mooring would give us access to the Town and the chance both to wander around and get some provisions and as already mentioned in a previous post, the moorings in Macclesfield are in a very poor shape, alright if you are prepared to use a boat plank or leap to the bank from a boat that cannot get into the side because of obstructions and that is not an attractive option with two dogs. 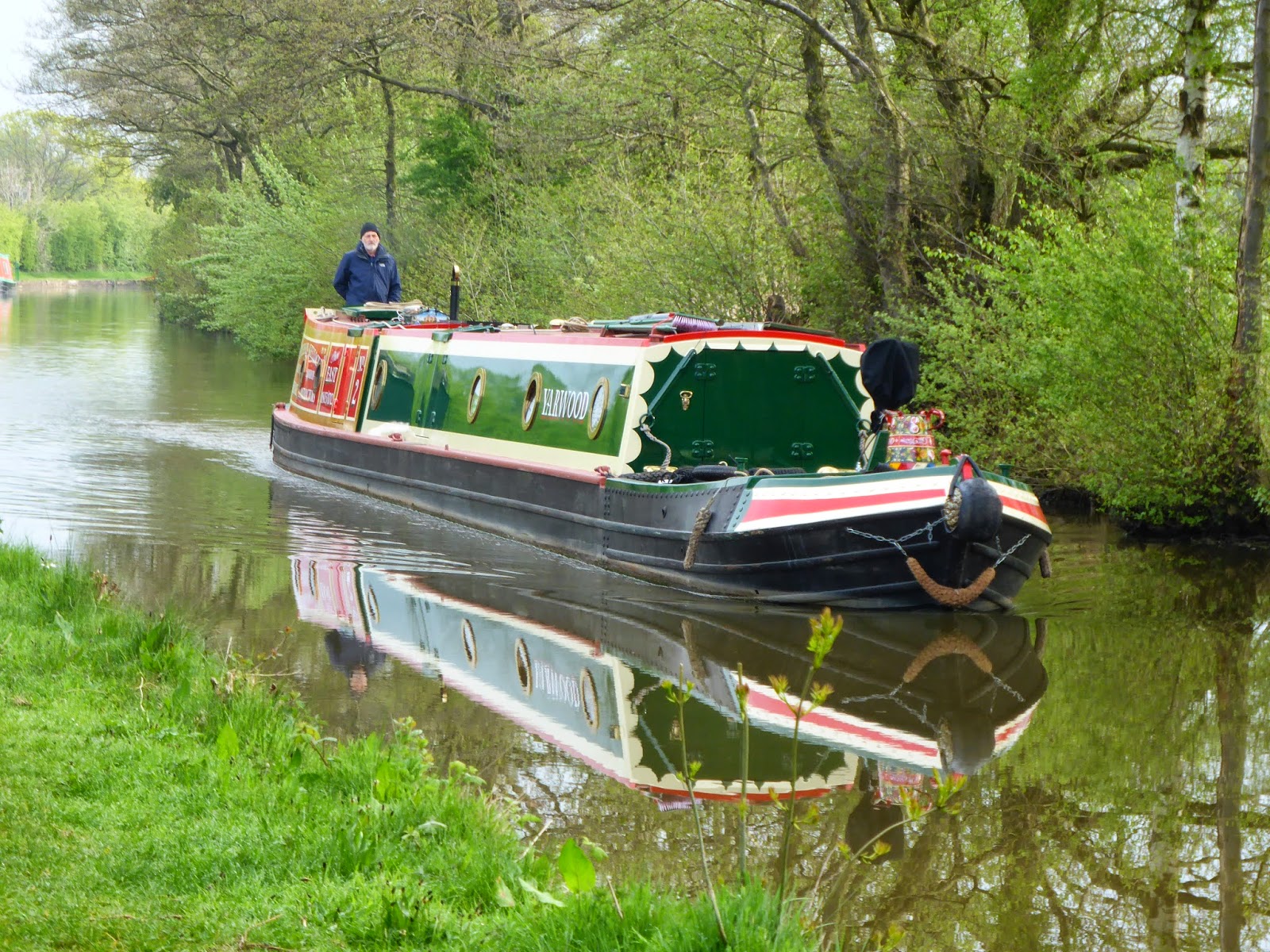 Off we go, Yarwood and steerer reflected in the canal 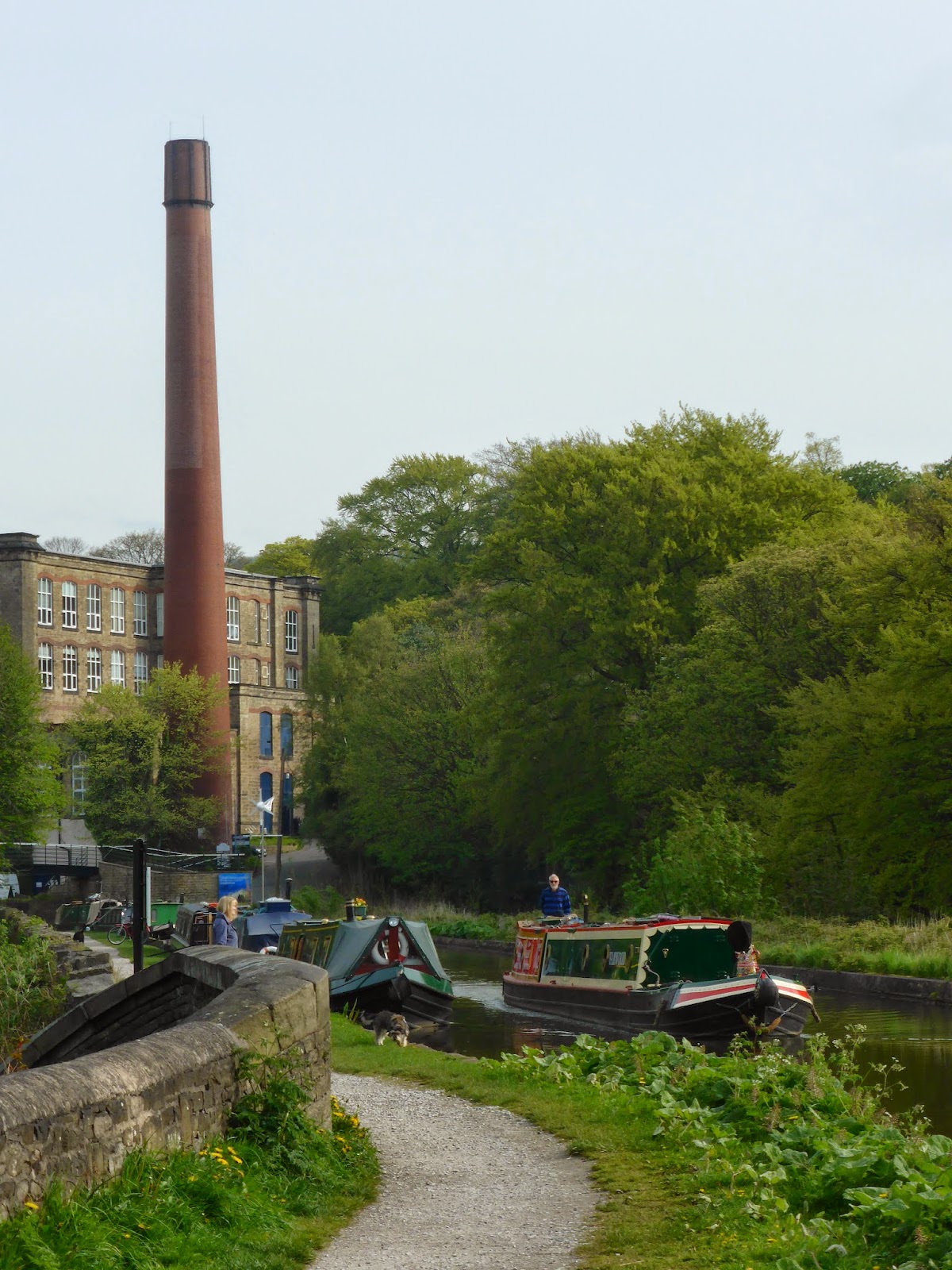 Yarwood coming across Bollington Aqueduct below the imposing Clarence Mill 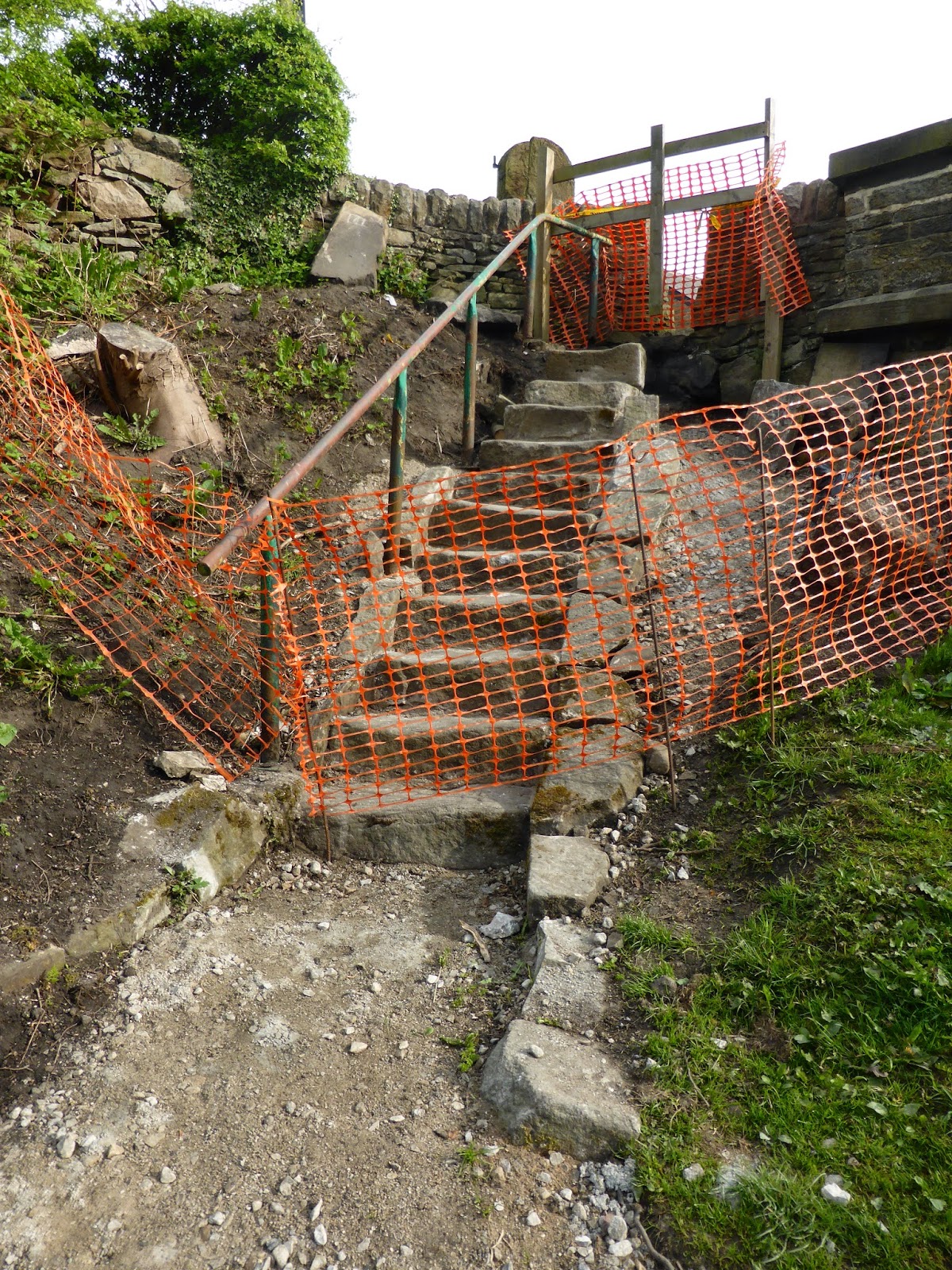 Steps under repair...this section of towpath has been 'adopted' by Bollington so it is either volunteers making these repairs or CR&T but there was no activity as we passed through 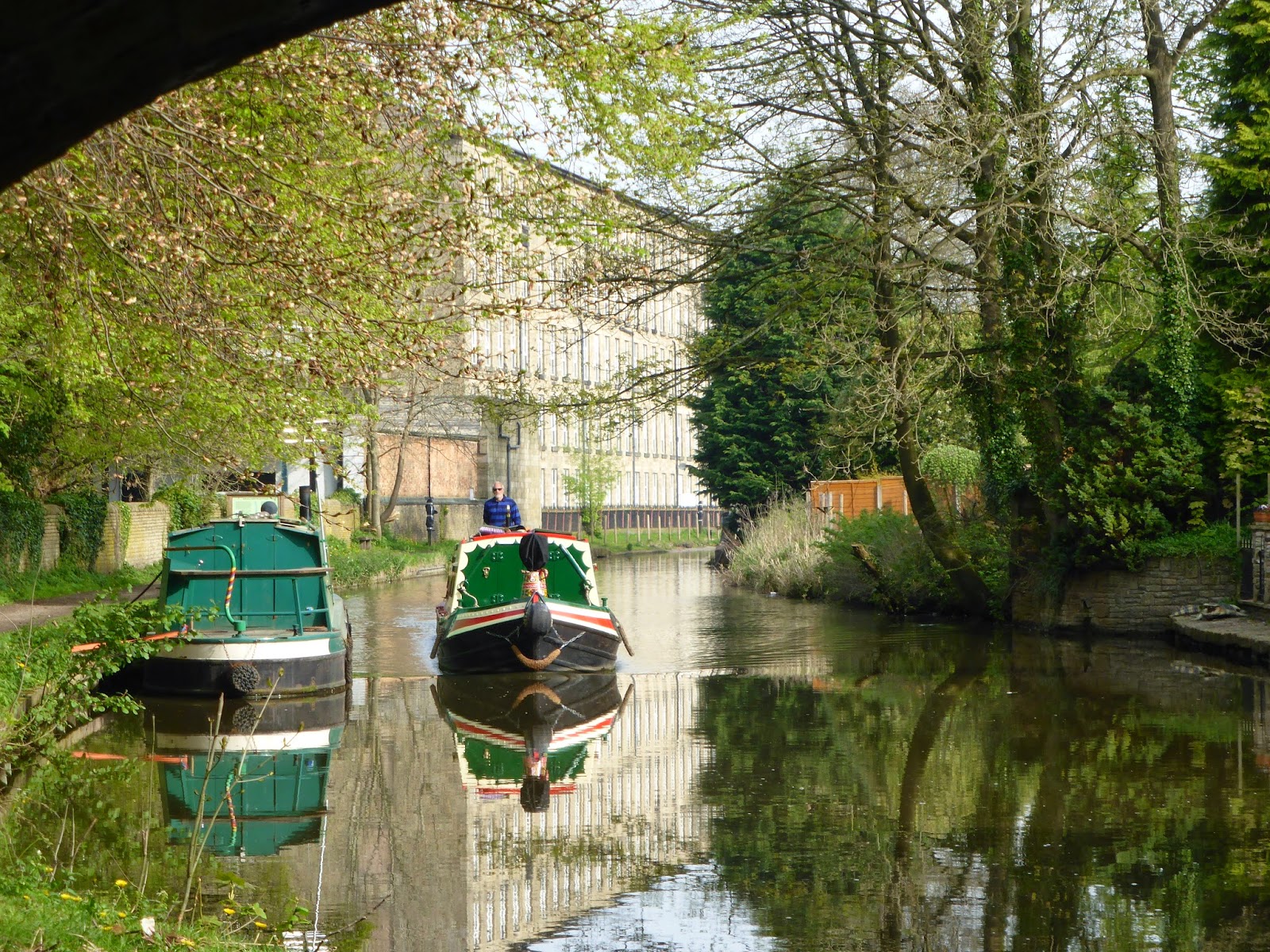 Yarwood passing the Adelphi Mill in Bollington.. we are about to pick up today's Idiot... 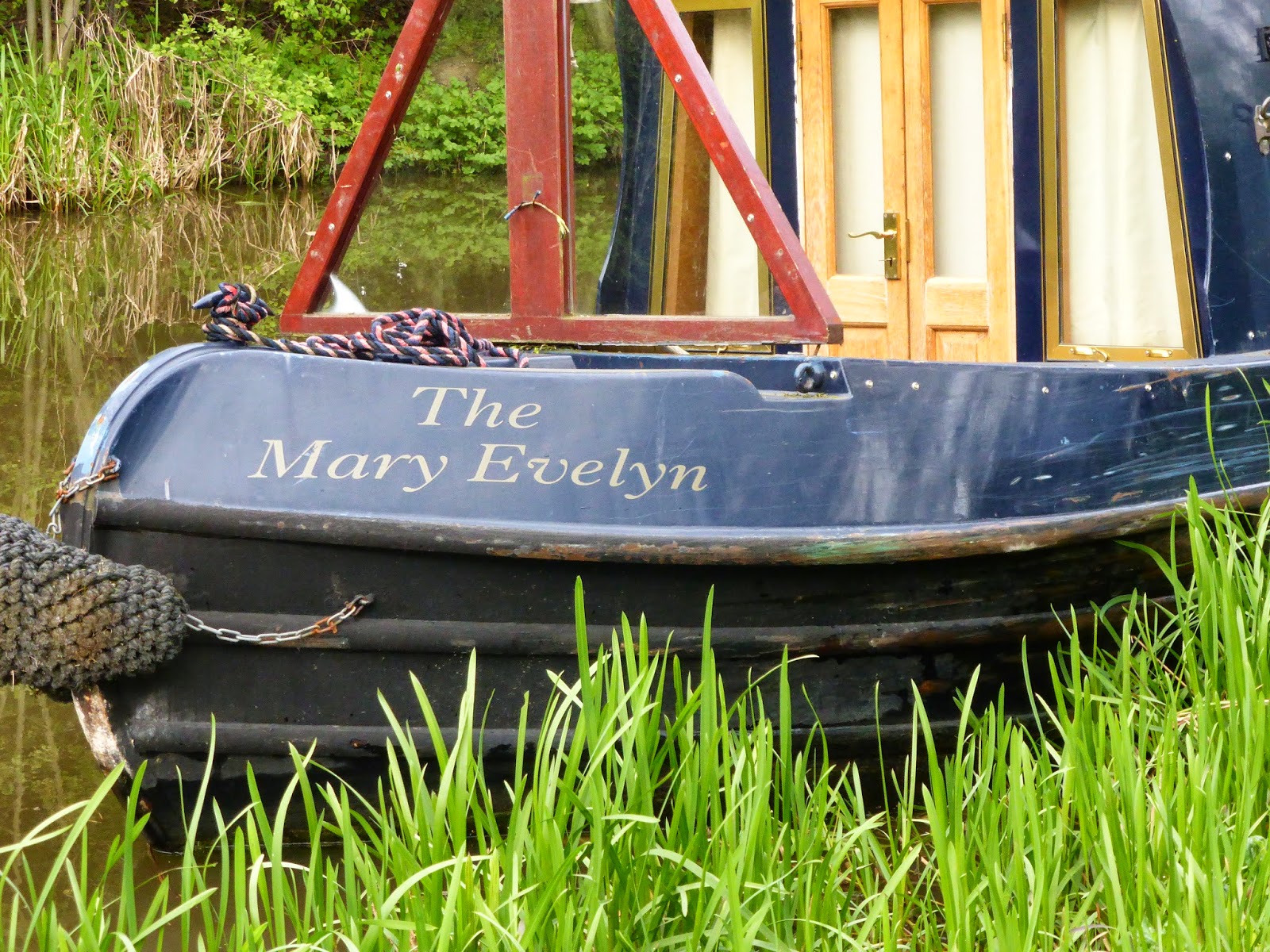 And here is the boat in question, The Mary Evelyn
As we came through Bollington I could just make out a blue boat some way ahead of us.   A couple of dog walkers ( I had rescued their Scottish Terrier from the road) mentioned that they thought that the Blue Boat ahead of us had hit a boat moored near the bridge.
It was evident as I started to catch up with this Blue Boat that they were probably correct, the Bridge-Hopper that seems to have taken up permanently mooring by the bridge  had very likely been clouted..
At first I thought the steerer might have been taken ill as he was slumped on the cant seats and 'draped' across the tiller.  I ran up to him when he had grounded the boat towpath side and asked if he was alright and perhaps he should pull over.  It was clear as soon as I spoke to him that it wasn't illness that was responsible for his erratic progress but rather a skinful of alcohol, in effect he was pissed, drunk as a lord, blasted, out of his skull!  And on he went, weaving from side to side, going aground, revving the engine and spewing canal water everywhere, smashing into bridges and canal sides.
Joe stayed back and followed along. 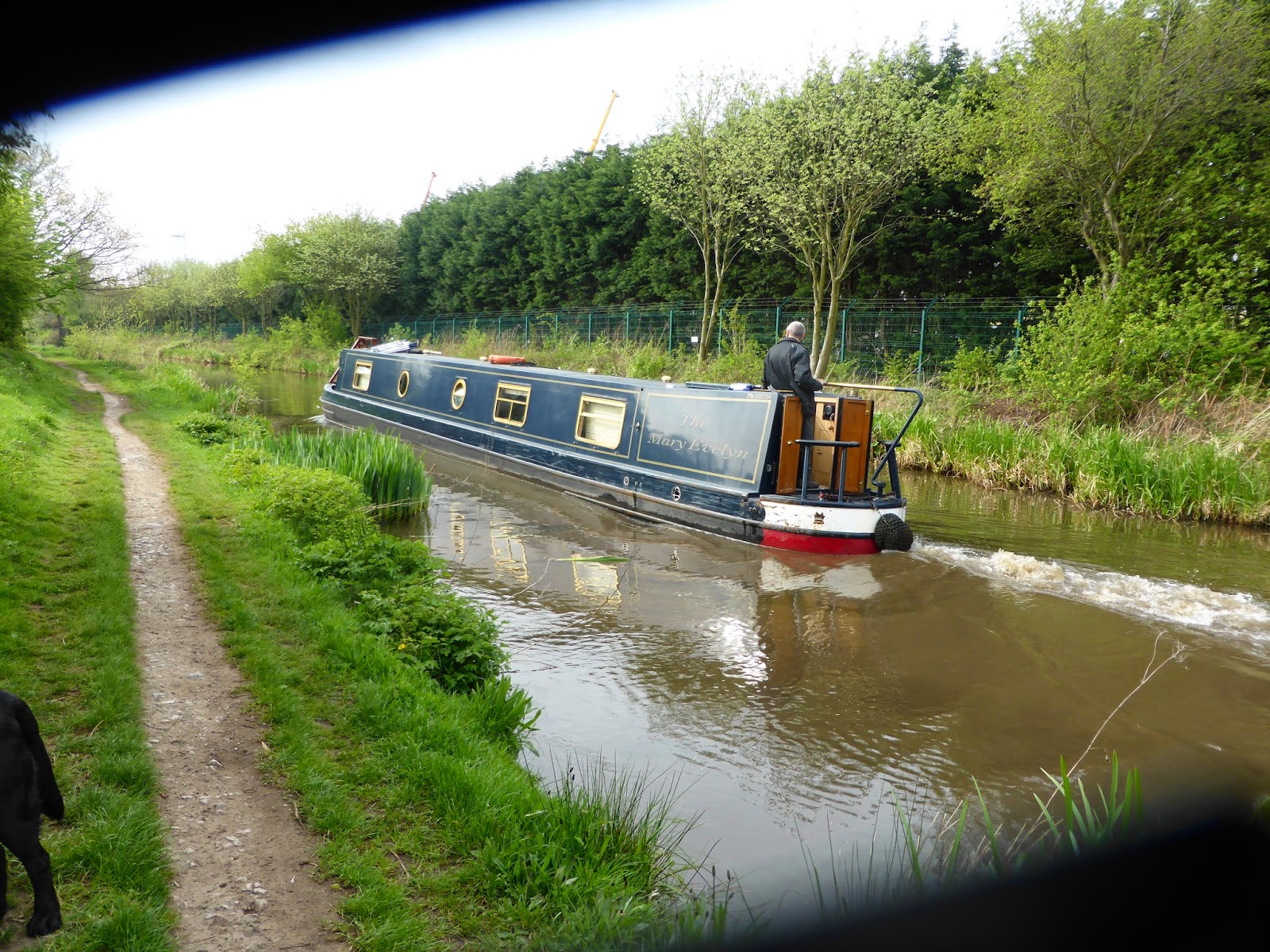 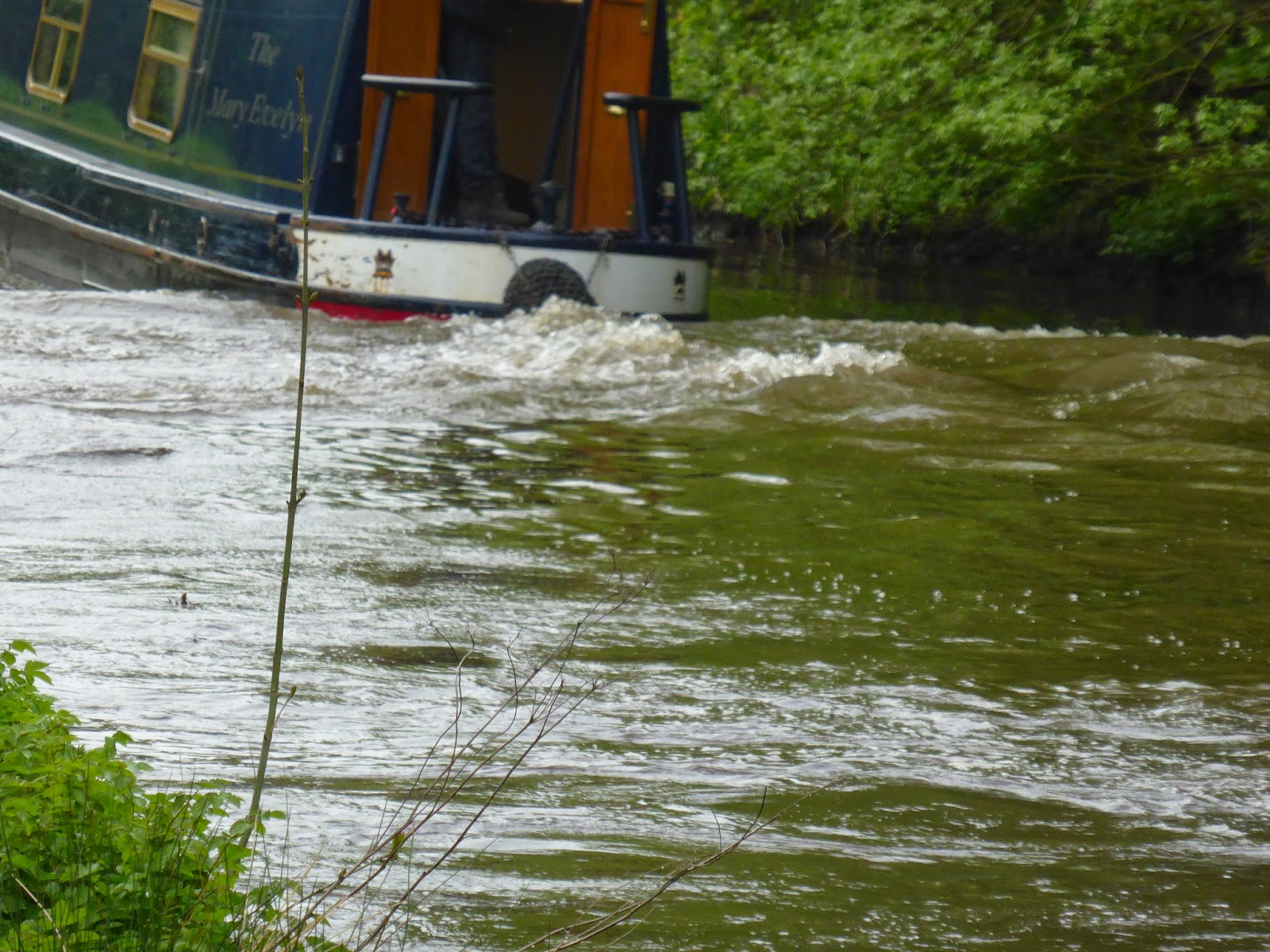 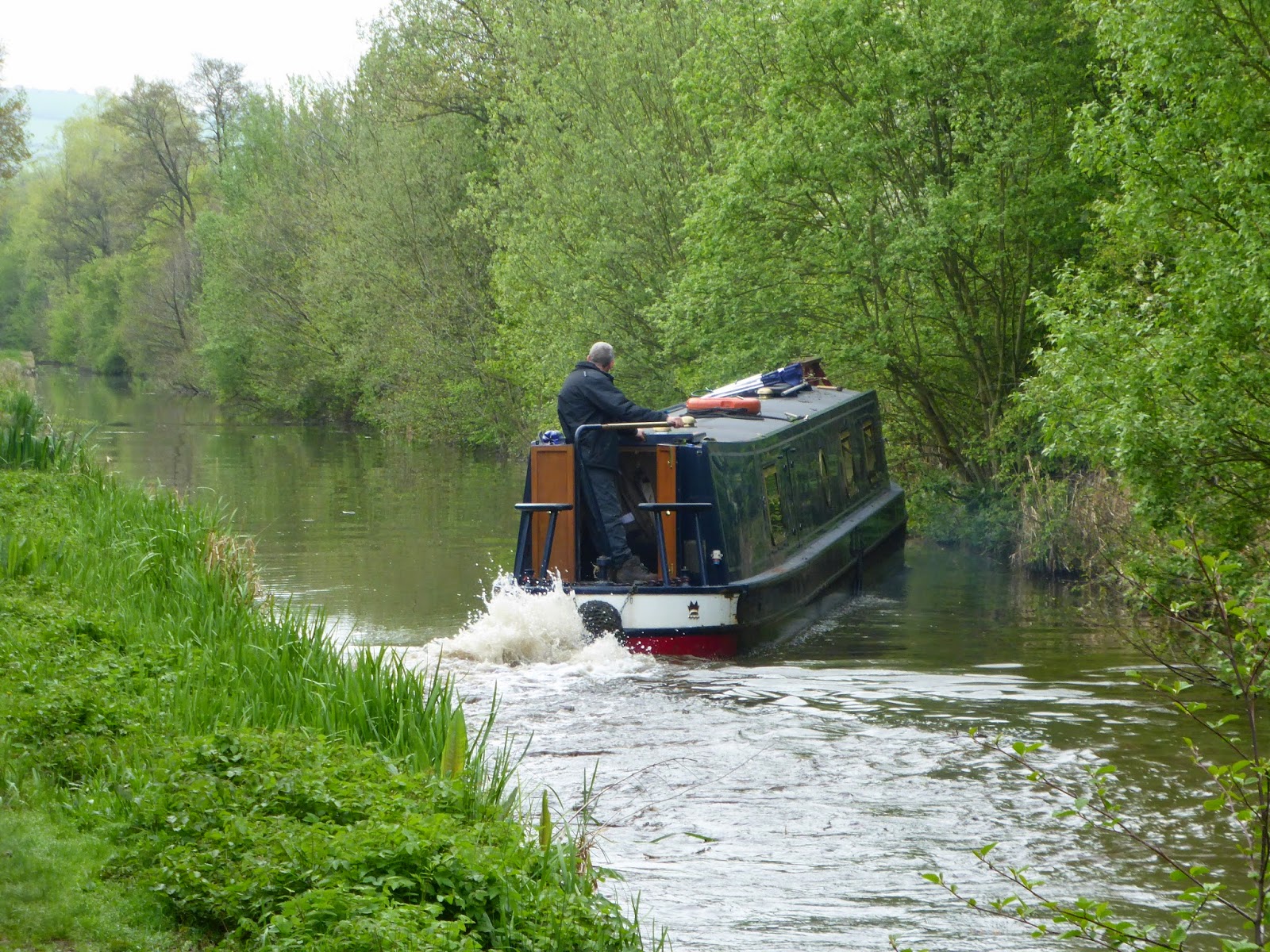 Checking out the far bank and trees 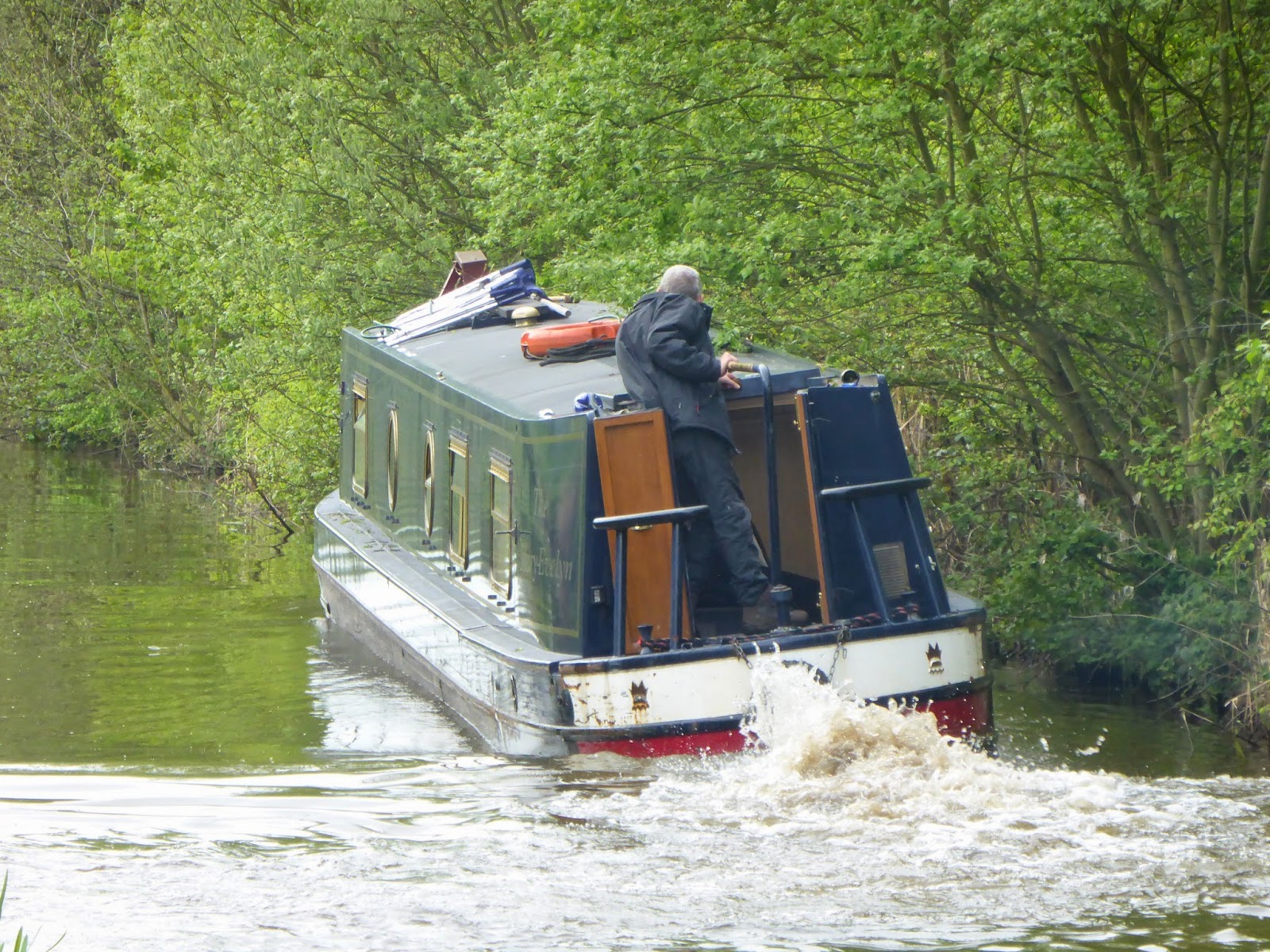 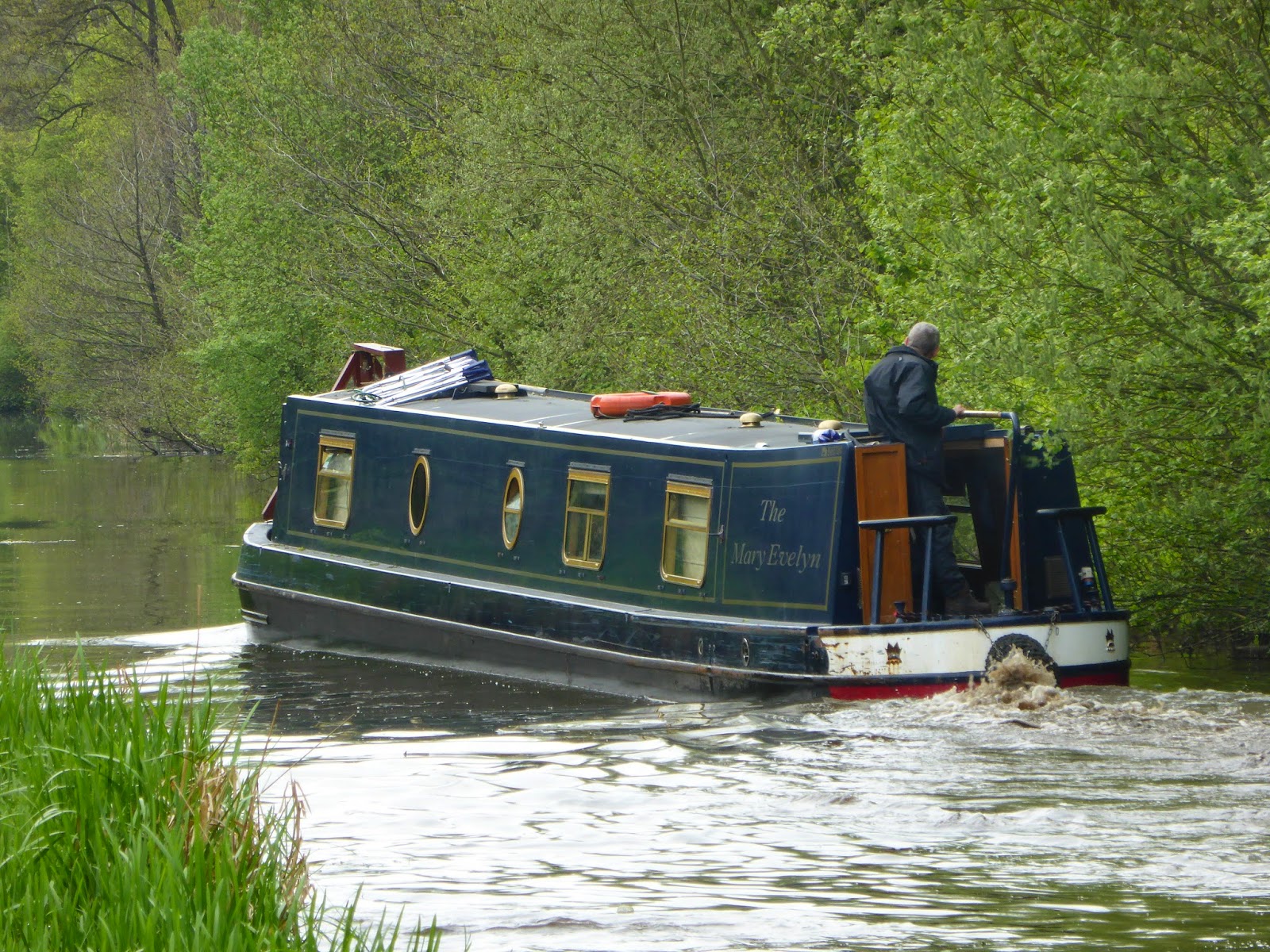 Weaving back to check out the towpath side 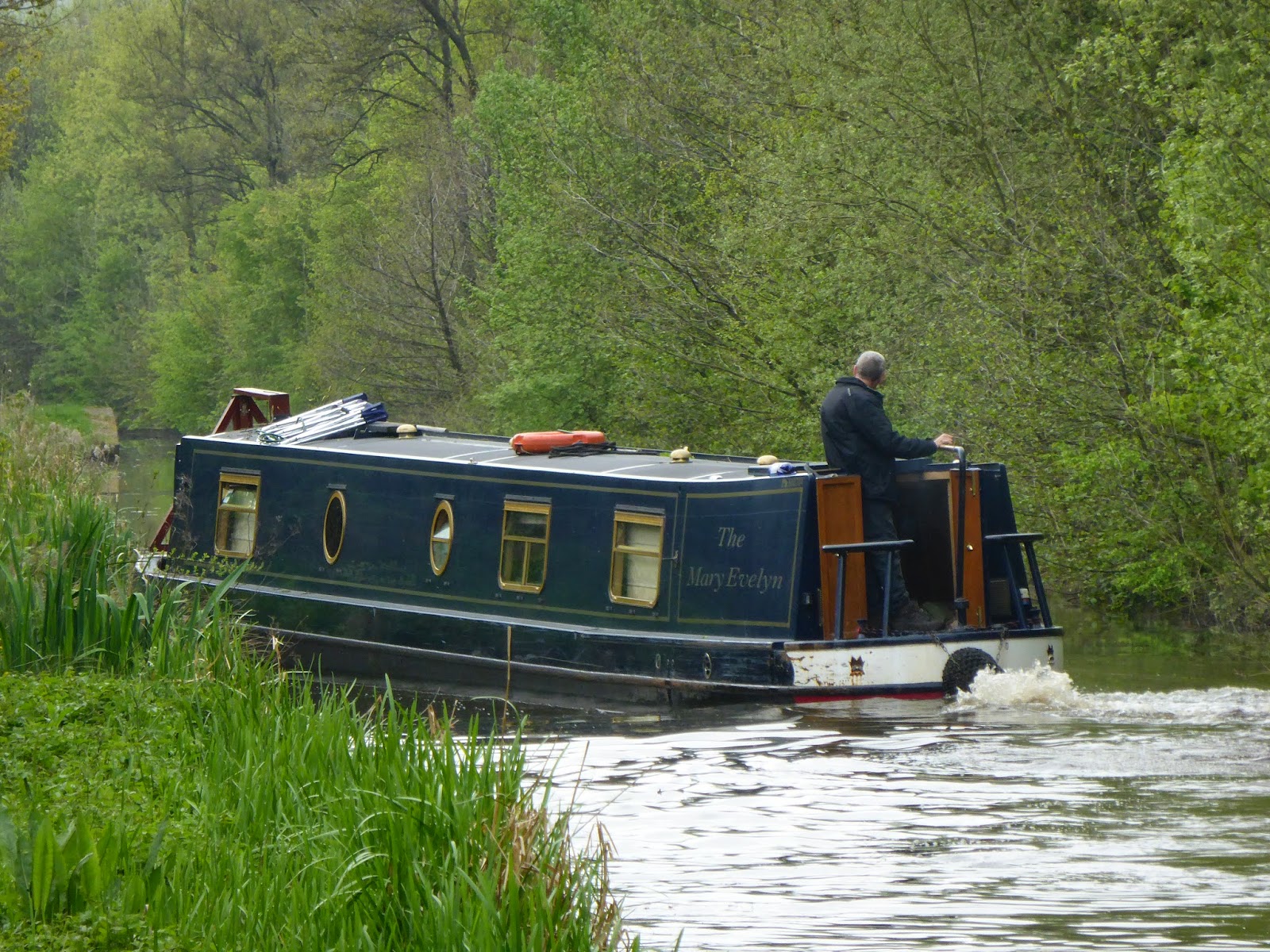 About to collide with the bank 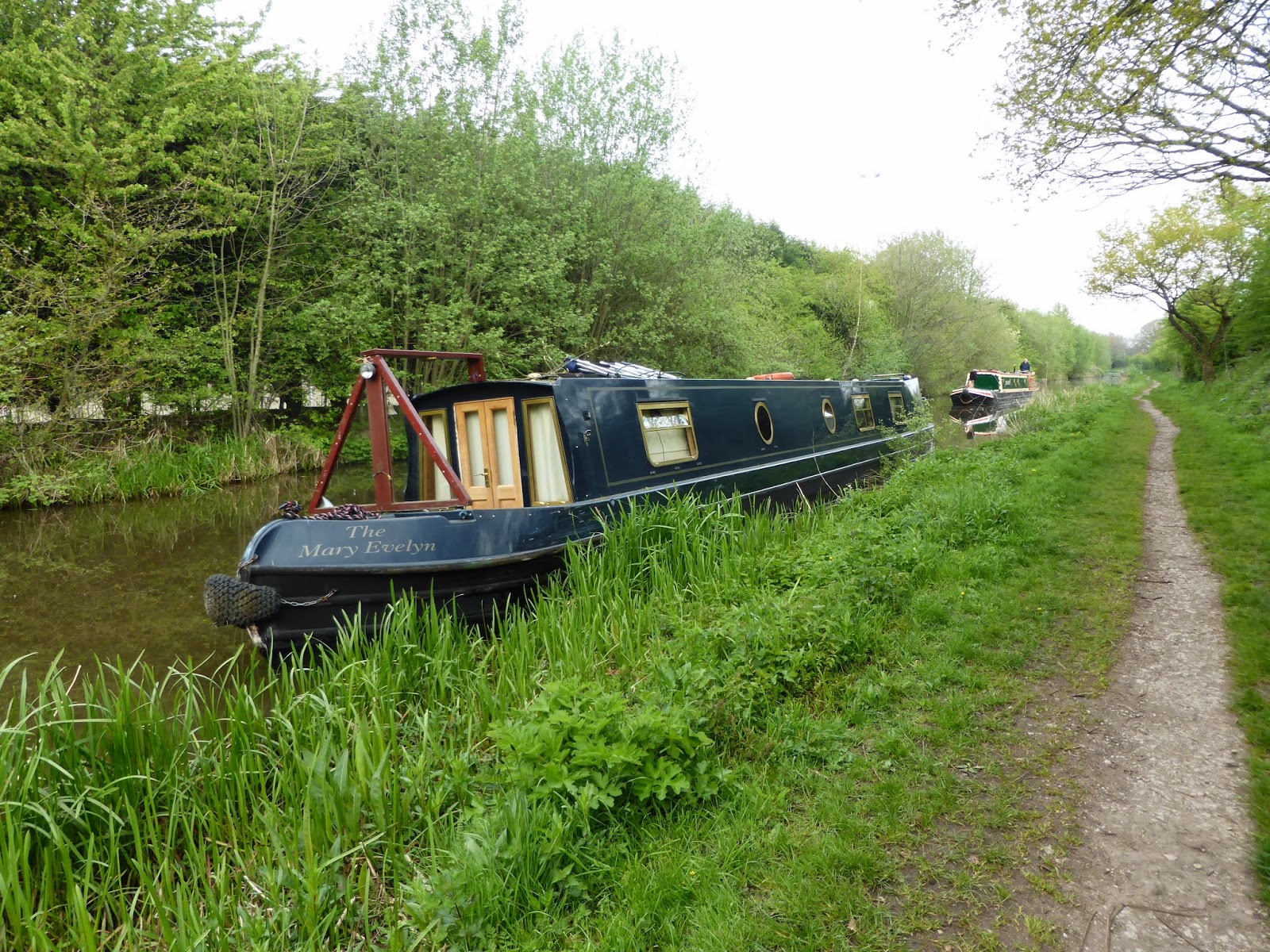 Gone aground again
By now I had phoned C&RT to warn them that they had a drunk in charge of a boat heading into Macclesfield and they may need police intervention and it was while the boat was grounded this time that Joe brought Yarwood through shouting at the steerer to stay put while he passed.  He did stay put but was soon on the go again following us along the cut.   I called warnings to the three boats we met coming towards us and they all managed to get their boats out of his way before any damage could be done. 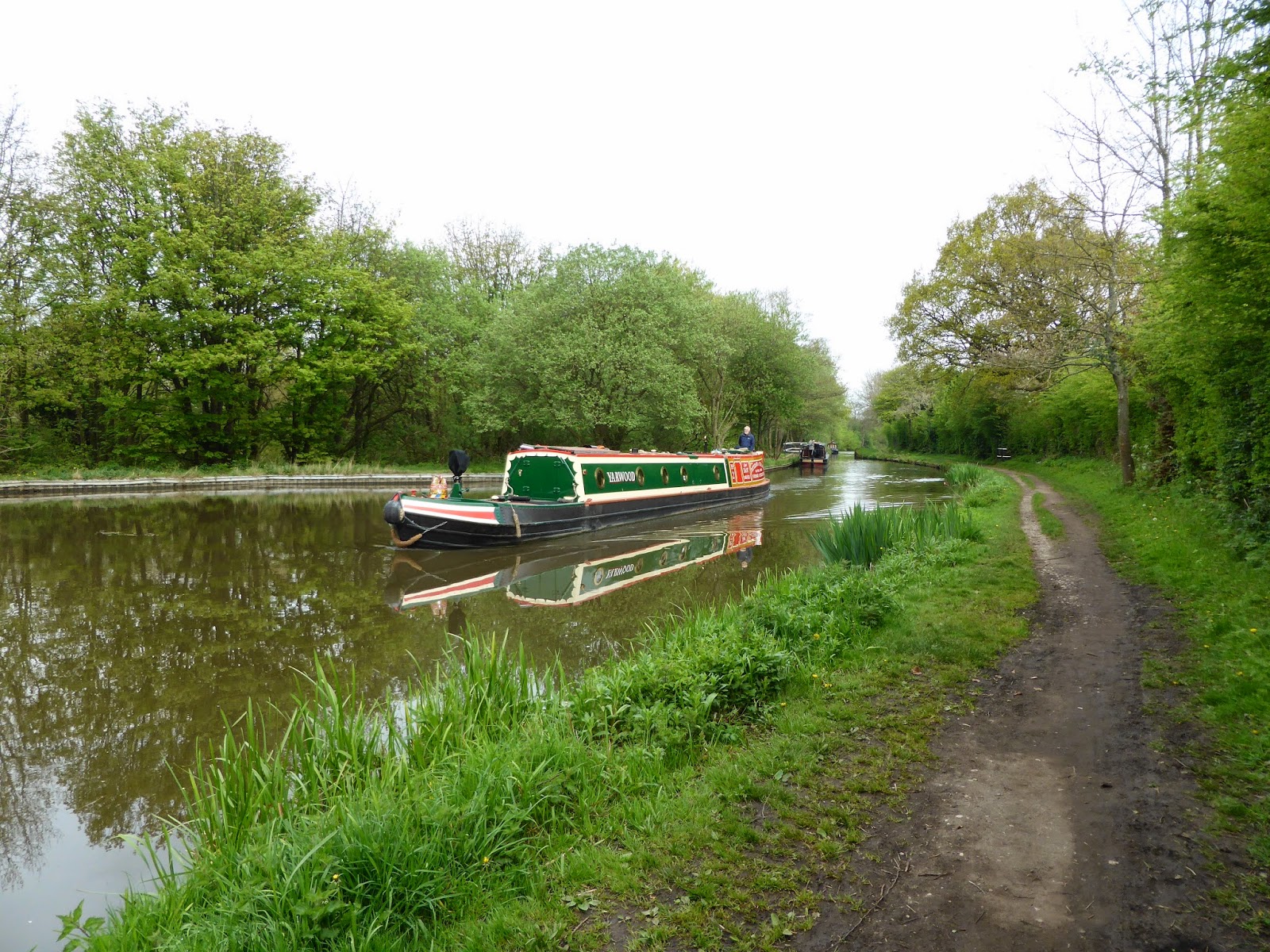 Free of the drunken boater we pushed on and didn't see him again as we entered Macclesfield and moored at Gurnett so maybe C&RT or Police managed to intervene.. 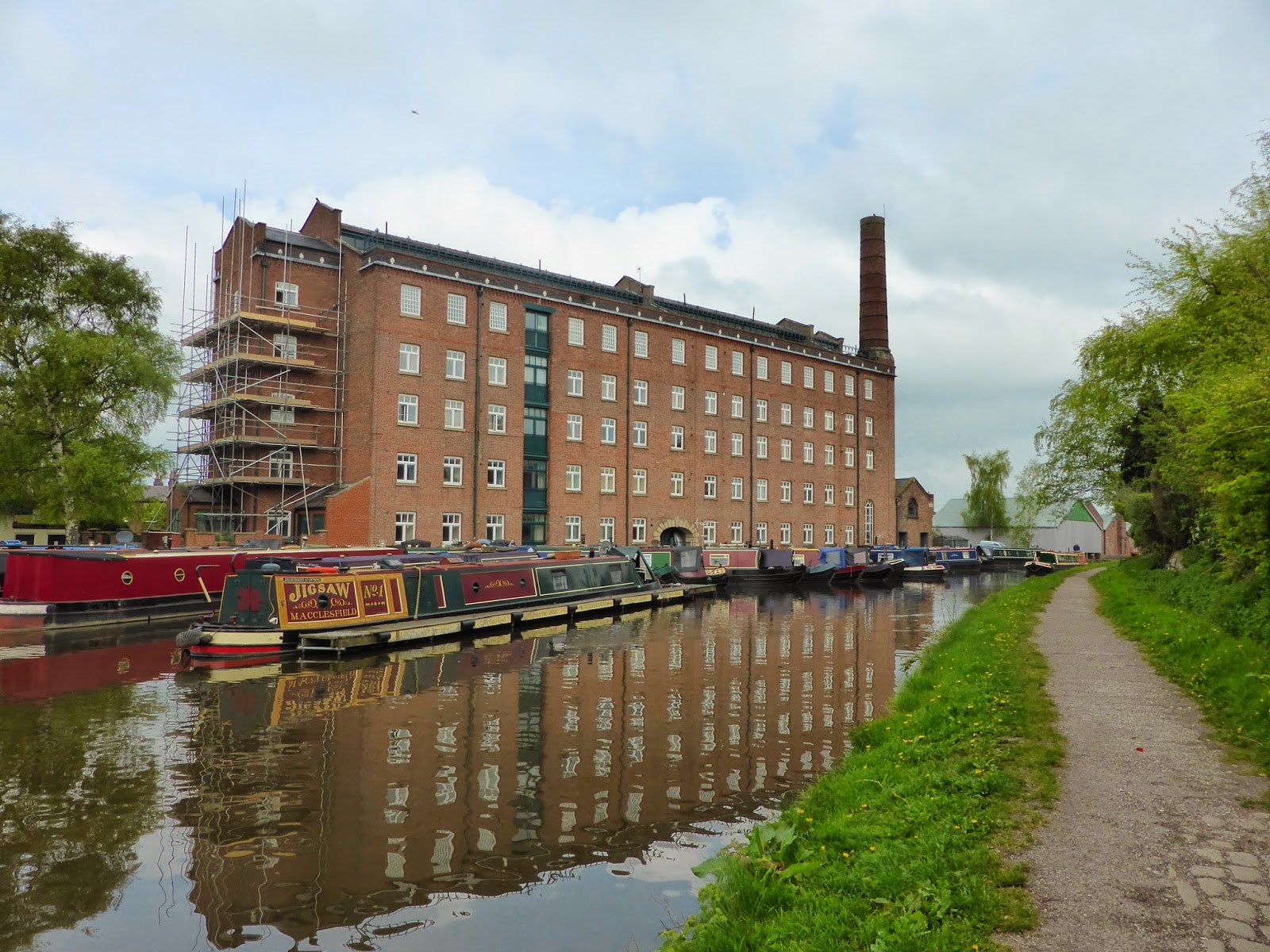 The lovely Hovis Mill at Macclesfield 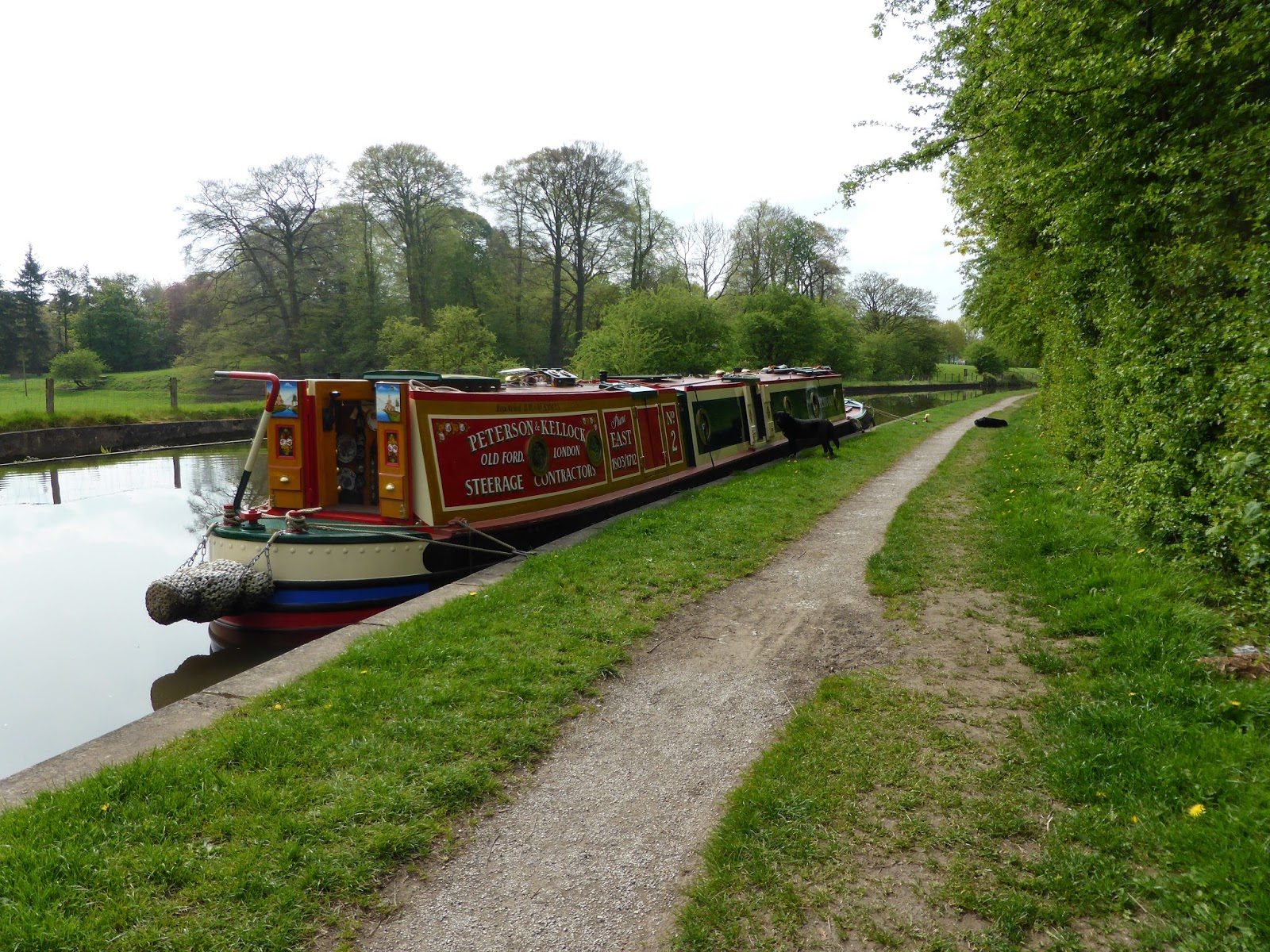 Moored up on the Gurnett Aqueduct
We walked into Town and had a roam about then hit Aldi and got a taxi back to the boat with two full rucksacks of provisions.
Posted by Nb Yarwood at 21:44