Poised for the descent

We left Middlewich this morning in glorious sunshine after a night of  persistent rain. We only had one lock on today’s cruise and the was ‘Big lock’ so called because it is 14ft wide as opposed to the customary 7ft and designed to accommodate the salt barges – barges rather than narrowboats – that plied this part of the canal from Middlewich through to Preston Brook, Manchester and Wigan on behalf of the salt industry. 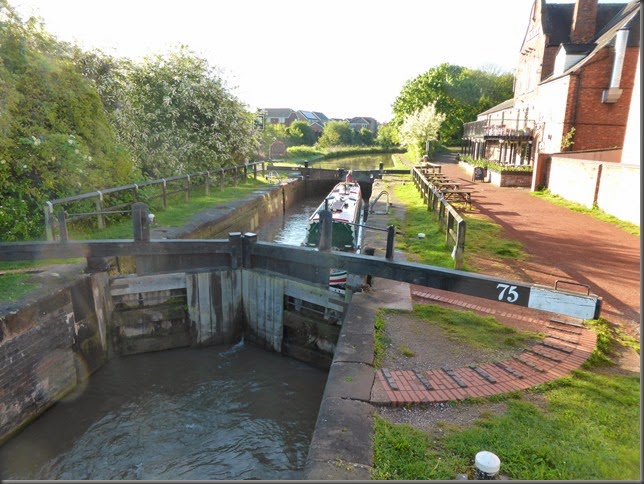 Big Lock. Try as I might, and I did, I just couldn’t get the get closed when Yarwood exited but serendipity stepped in as another boat approached from the north and wanted the gate open – how opportune 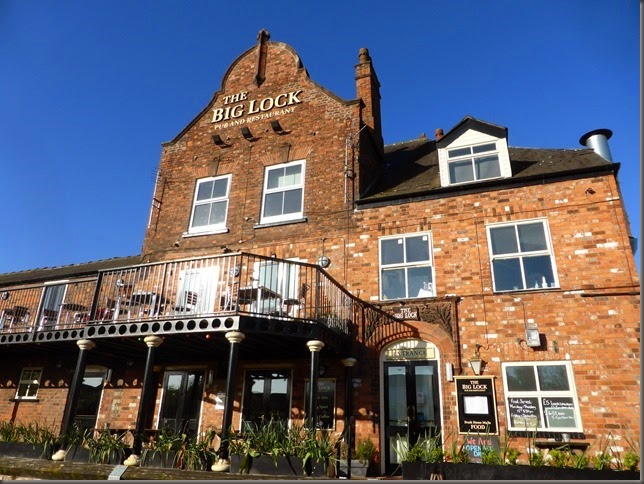 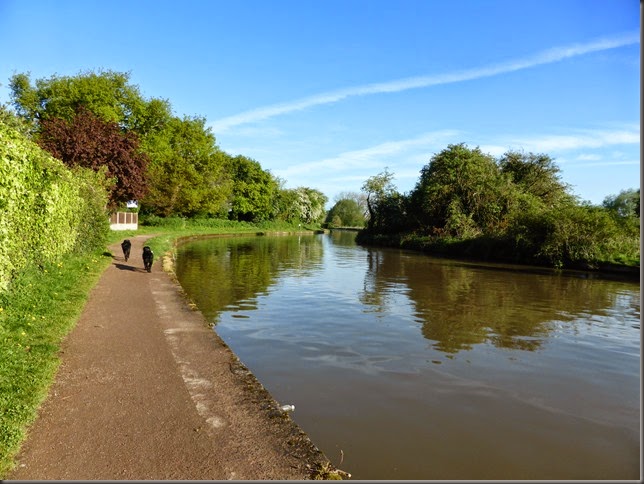 The canal is broad and deep as we leave Middlewich behind which means Joe can bring Yarwood along and keep pace with the dogs and me. 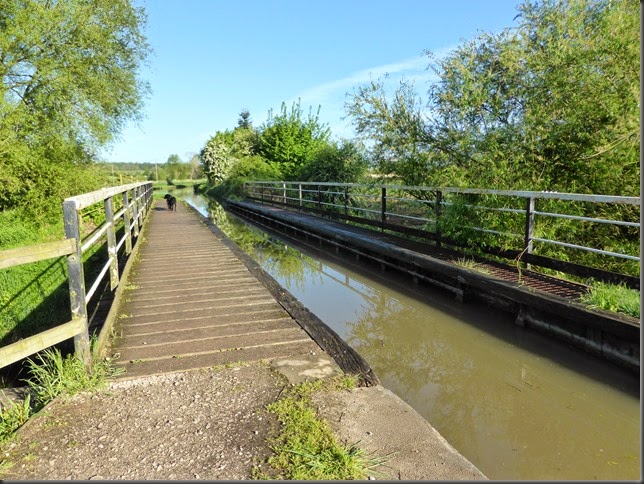 Croxton Aqueduct taking the T&M over the River Dane.  When this was replaced it was built to narrow dimensions putting an end to barge traffic on the canal. 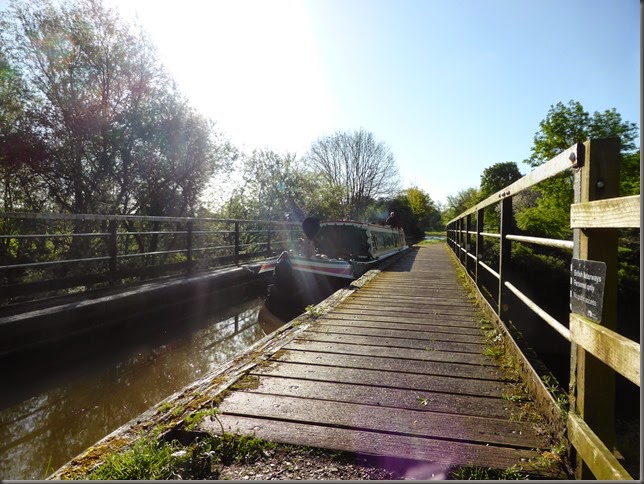 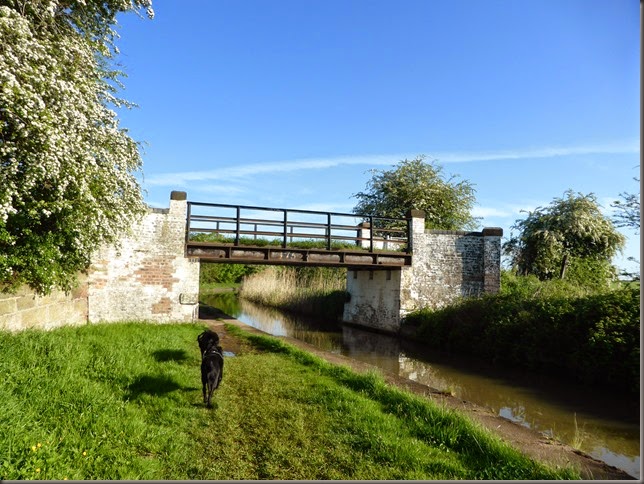 Bridge 175.  Typical of this stretch, no fancy brick arches along here because of the amount of subsidence that salt extraction has caused.  This style of bridge can be  relatively simple to redeck when the bridge piers subside. 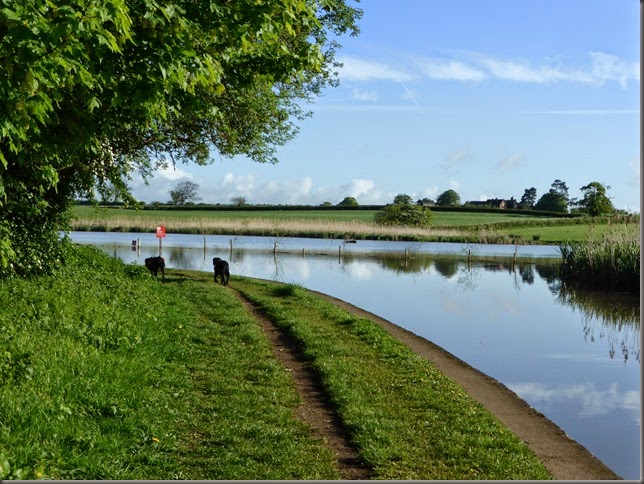 Approaching Croxton Flash. The flashes, as they are called, are areas where the land has sunk as a consequence of salt extraction and the depression has filled with water, effectively a shallow lake forms. 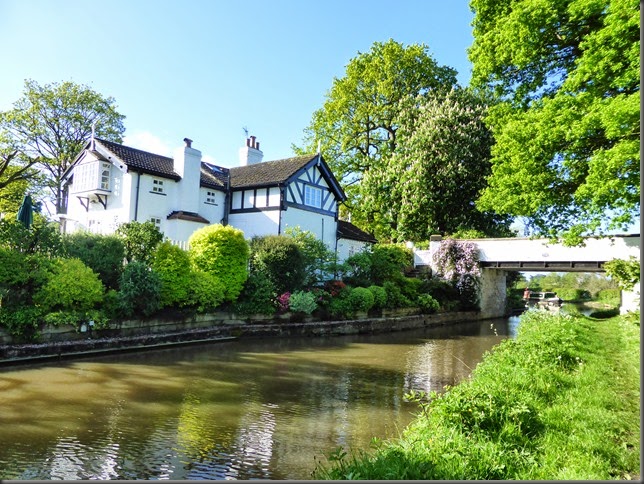 A very desirable cottage at bridge 179 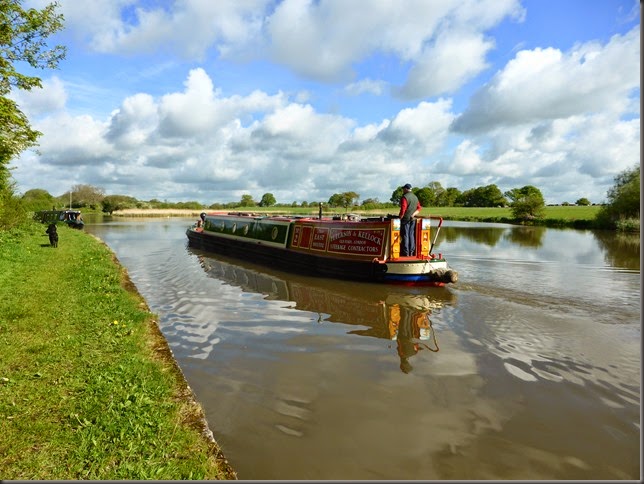 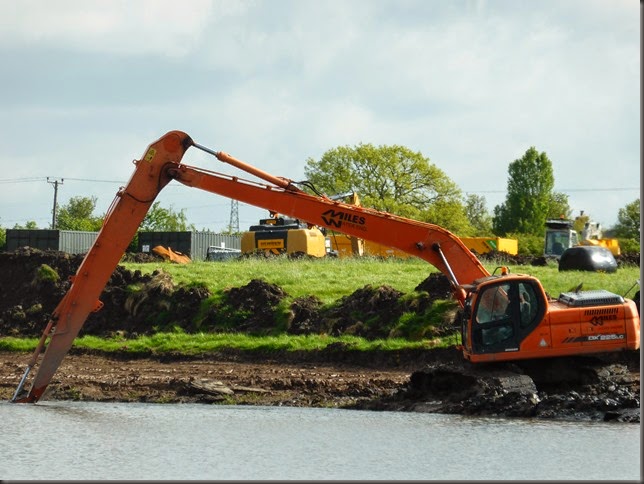 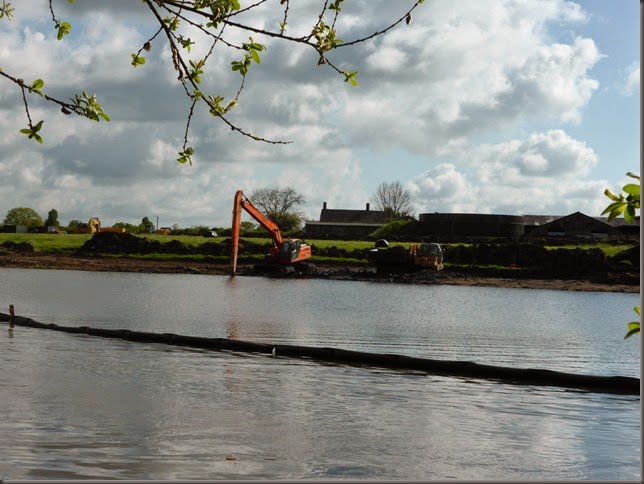 The flash has a temporary barrage across it separating the excavation activity from the canal. 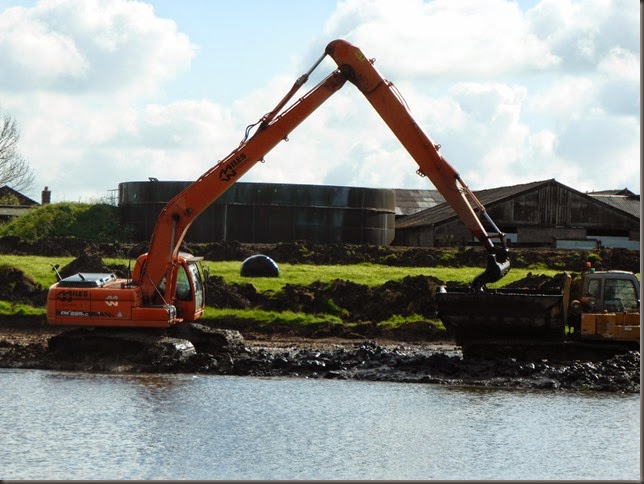 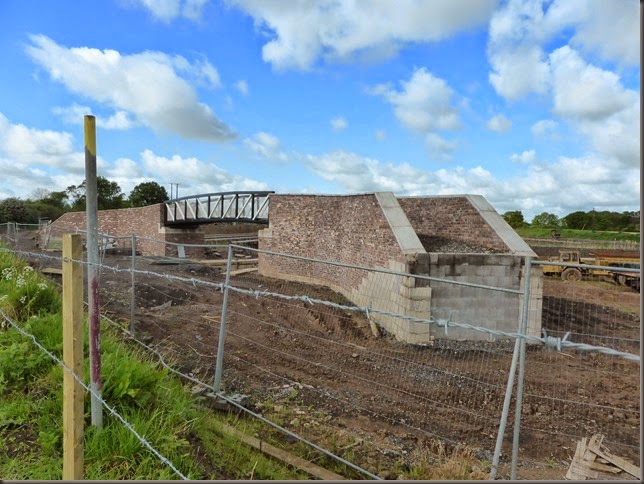 And immediately pass the first lot of excavation is yet another marina under construction.  This one seems very near completion and not far from being watered. 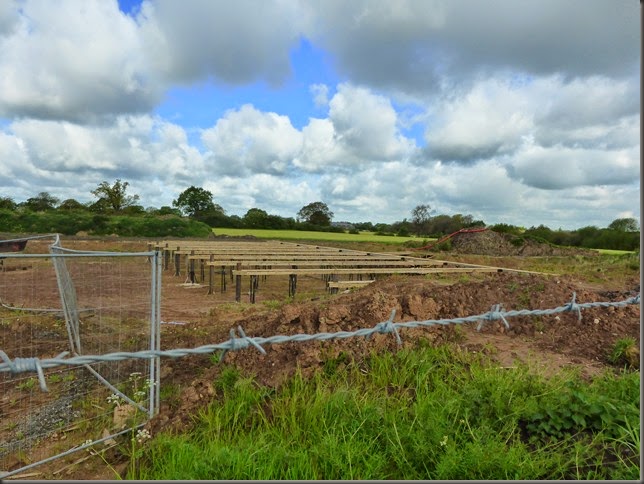 As we progressed along a straight just south of Rudheath I saw a narrowboat coming towards us and I thought that it was only the third boat we had passed so far that day.  As the boat got closer the woman on the back started to wave her arms about; I looked around to see what she was alarmed about and as I couldn’t see anything and Yarwood was well back I concluded that she was either nutty or doing a rendition of YMCA.  It turned out as we got closer to each other that I was right, she is nutty and she was doing a YMCA dance.  It was Sue and Paul on Nb. Zambezi who had been our direct neighbours at Market Harborough where we had winter moored!  Soon the two boats were moored up, the kettle was on and seats produced and we spent a lovely 45 mins catching up with each other. 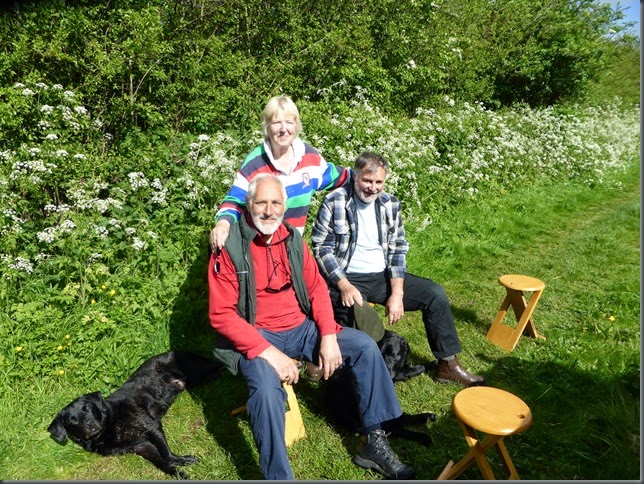 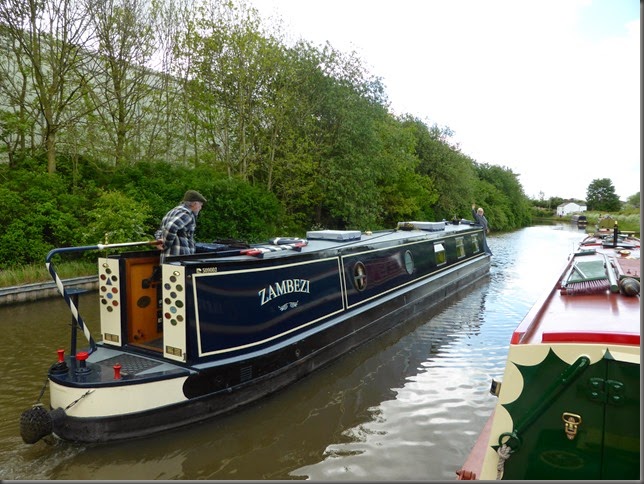 And there they go…goodness knows what she is dancing to on the front of the boat this time but it looks like a John Travolta number from here? 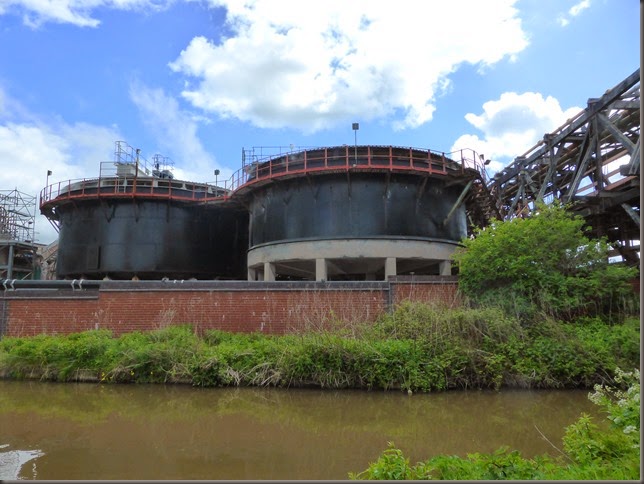 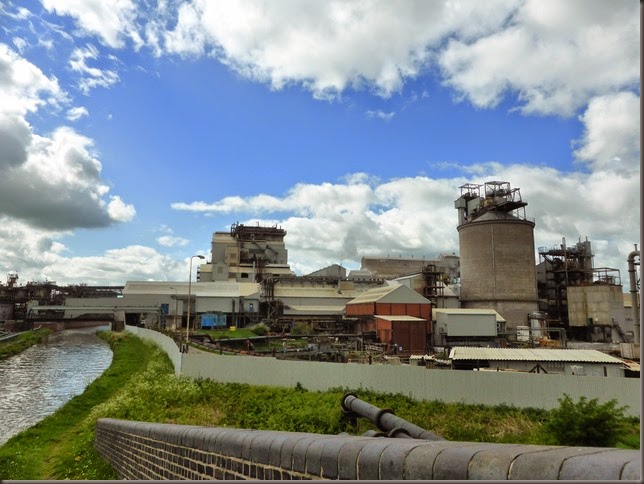 The canal skirts around Northwich and passes this salt works

We press on pass more flashes and Marbury Country Park until we arrive at Anderton services where we do the necessary and meet our latest blog reader, Archie a ten week old Golden Retriever. Well Mum and Dad, Chrissie and Neil,of Nb. Four Goldens, read the blog, Archie just looks cute..

Nice to meet you Neil and Chris. 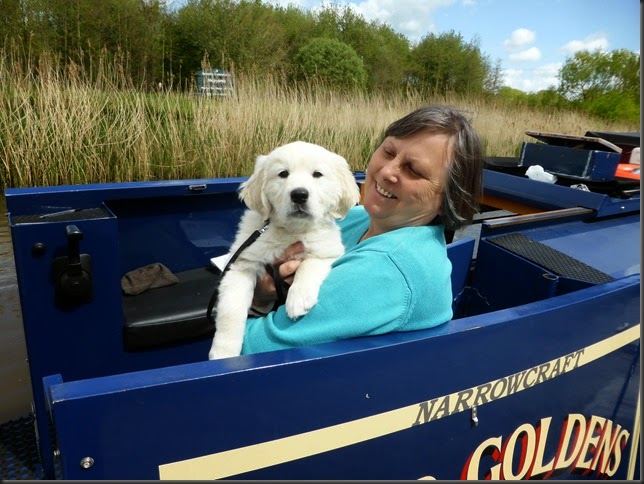 Archie posing for the camera safely in Mum Chris’s arms 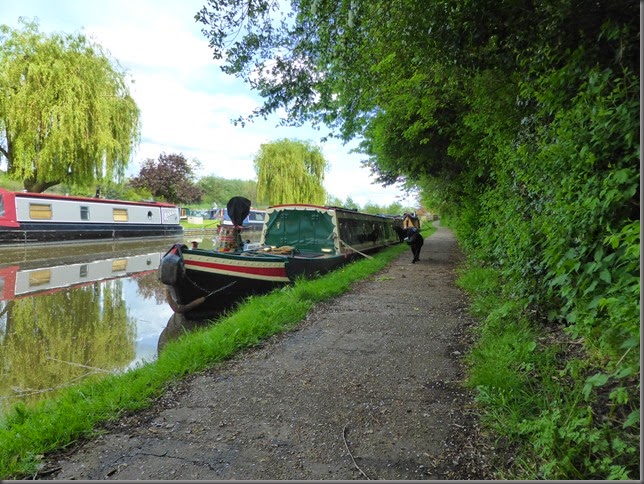 So that’s us for the day, moored after nine and half miles and one lock. Tomorrow we descend to the River Weaver