Universal fast broadband is still some way off it seems, despite Yarwood being equipped with both  T-Mobile/Orange and 3 we could get no service to speak of after Cropredy until we reached Braunston; hence no blogs for days.

So to catch-up I start with the people/social stuff and then I will record a bit of the cruising/journey stuff in my next post.

Tuesday we had moored up, settled down and wanted to watch Channel 4 News ( the best on the box in my humble opinion, it beats the BBC into a cocked hat) but we couldn't get a TV signal or Sat. signal worth the trouble so we thought to watch something We had recorded,
(We is perhaps a trifle misleading as I haven't got a clue how to record anything  so We actually refers to Himself).
The titles were running when I heard the note of a trad engine approaching.  Being a nosey oik I looks out expecting to see a working boat approaching and sat down again when it wasn't but as the boat slipped past a lady, clinging to the side of the cabin, called out that she read the blog and as the boat slipped past I spotted that the boat was Nb. Achilles, a boat that had been fitted out and owned by  Stuart Harper, our boat fitter.   Achilles was soon mooring up and we spent most of the evening on the towpath getting to know Lynn and Jonathan, and their two dogs and stunning Maine Coon cat. 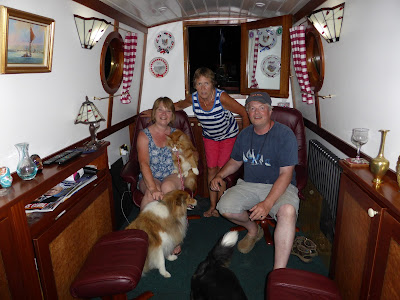 Lynn and Jonathan with cat and one dog (the other is disappearing down the boat) and me. 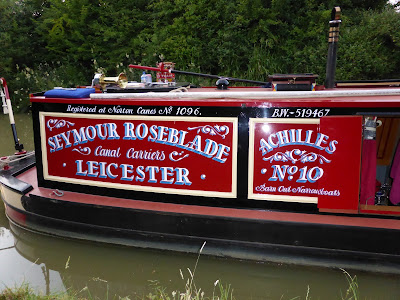 Nb. Achilles, a stunningly beautiful boat that Lynn and Jonathan are rightly proud of. 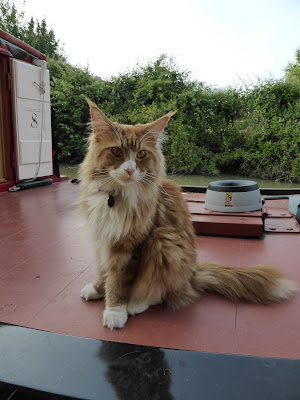 Duke the Maine Coon Cat ..wow he was a very handsome and large cat...who thought he was a dog.. Floyd was quite fascinated by him.
Lovely to meet you all.
On Wednesday morning we slipped away early to take advantage of the coolness of the early hours.  Arriving at Marston Doles we found ourselves in a queue for the locks and as we watered the boat while we awaited our turn for the locks I spied a boat that looked somewhat familiar emerging from the lock...
When I spotted a mad woman on a bicycle seconds later my suspicions were confirmed; Nb What a   Lark helmed by our favourite Stalkers, David and Amanda. 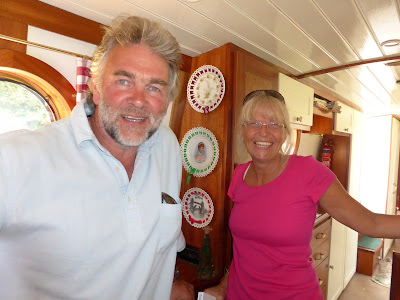 David and Amanda, stalkers extraordinaire
We moored up as soon as we managed to get through the lock and caught up with each others news over a cuppa and then Joe and David had a quick race on the folding bicycles  before they were on their way again. 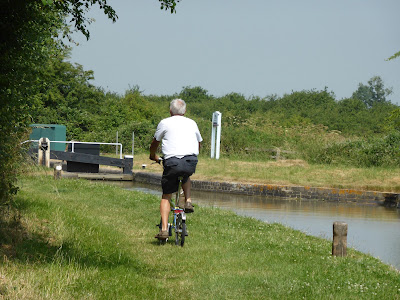 Joe goes off to the starting point.. 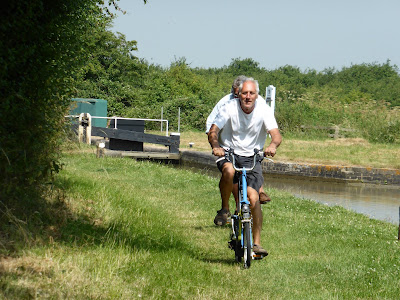 And Joe is leading as they come around the bend 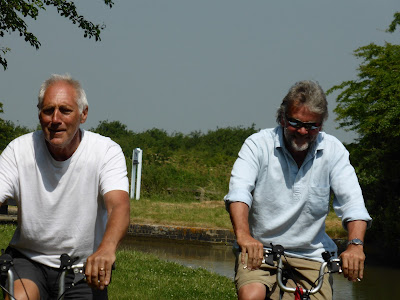 But David is soon catching him
We stayed overnight between the two locks at Marston Doles  and then Thursday morning we dropped down the flight, got some shopping, watered the boat and then headed towards Braunston where we had arranged to meet David and Amanda again. 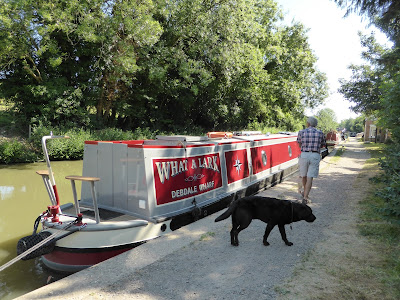 Nb. What a Lark in Braunston 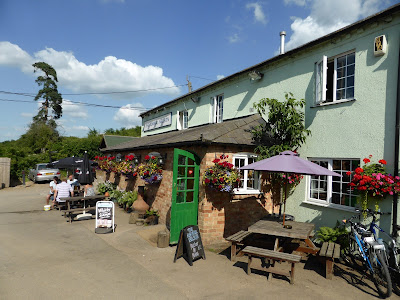 Admiral Nelson, Braunston
We went to The Admiral Nelson for dinner on Friday evening with David and Amanda and their friends Ralph and Rachel. 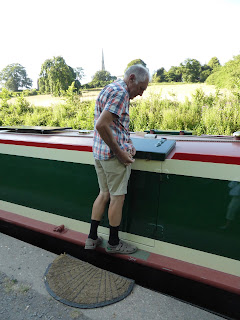 Joe dressed for dinner..stylish black sock and sandals  just to wind up David 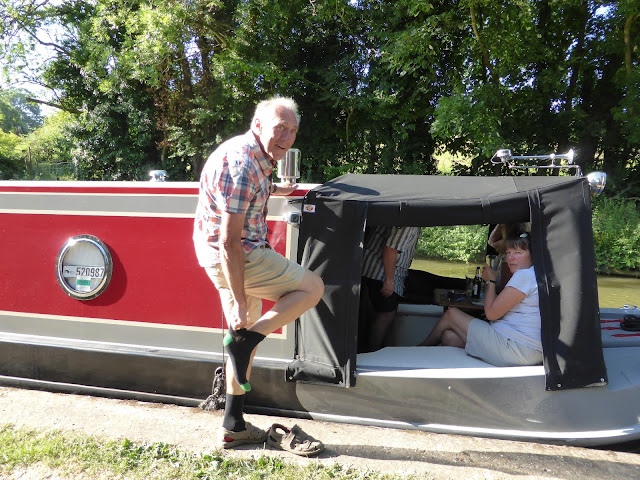 Wind-up complete, the socks coming off BEFORE we go out
We had a lovely meal at the Admiral Nelson, this is a pub that is really on the up and the place was buzzing.
Posted by Nb Yarwood at 18:39