Late morning yesterday I toddled off on my own with the two dogs, leaving himself to sling the vacuum around the boat and generally give things a tidy - easier done minus two large black sleeping dogs you see..

The sun was out and everyone I met were pleasant and friendly, all but one that is; coming towards me on the public FOOTPATH - clue's in the name - was a stocky, bald, be-shorted, middle-aged chappie on a bike.  This cyclist rode directly up to me and stopped dead in front of me - I was also still at this juncture..
I said "I suppose you want me to move then" as I stepped to one side.

The cyclist then 'explained' to me that
and urged me to

'get the straw out of my arse' and don't country bumpkins like me know what side to drive, before he cycling off again.

Now as tempting as it was to respond to this gentleman  I managed to restrain myself and merely watched the rant in silence before walking on thinking 'what a twat!! and 'some poor woman was/is probably married to that bullying dickhead.'

The rest of the walk was lovely however and on arriving back at the boat we had a visit from a young lady of ten, Katie, who was dragging her Mum, Louise, towards us.  Katie was eager to tell me that Mum reads the blog...  Katie and Louise then had a guided tour of Yarwood while Dad, Alan, chatted to Joe.
Lovely to meet you folks, enjoy your boating. 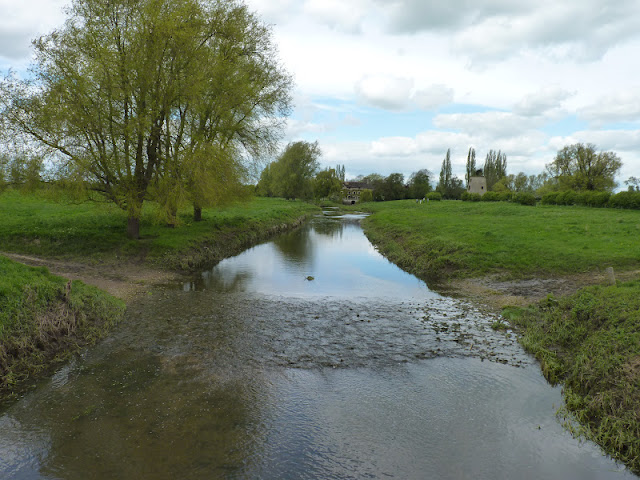 A ford now visible as the water levels continue to drop

Joe and I settled down in the afternoon to watch the Spanish Grand Prix before receiving more visitors at four o'clock.   Ken and Sue, who we had met on Friday at the Castor beer festival, are very interested in a life afloat.  We invited them over to see us and Yarwood and chat about living aboard a narrowboat.   And again, lovely to meet you folks as well.  ﻿