Extending our stay in Braunston...again


On Sunday morning after the Grand Prix we had dropped down through the six Braunston locks and serviced Yarwood at the Stop House.  I had stripped the bedding, and had that in the washing machine as we descended the flight, the plan being to get every item that needed washing done and dusted so we could brim the tank before leaving Braunston.    However, after hearing from Adam ( NB Briar Rose) that he was to be in Braunston on the Monday we had a change of plan and stayed put in order to see him and as we were staying, we then treated ourselves to Sunday lunch in The Plough and then pottered about getting few bits and pieces done.

After our rather large lunch I took the boys out to walk some of the excess off.  The fields around the village are filled with ewes and their new lambs so the dogs stay on leads when we are off piste - Fletcher is none too impressed with any farm beastie, they are all too frightening but Floyd is quite another matter...he likes to meet-and-greet if they are big, e.g. cattle, horses or pigs and if it's rabbit sized/shaped then he is up for a chase. 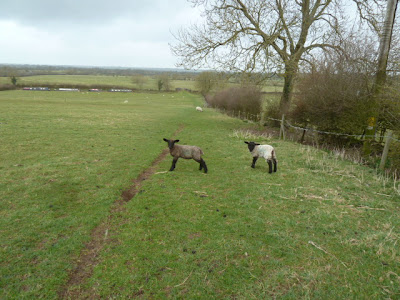 This pair being brave/curious as the dogs and I approached quietly
On Monday morning Adam duly arrived and  knocked to say he had arrived in Braunston and would call back to the boat when he had completed a boat test for Canal Boat magazine.  A couple of hours later, test completed, we ambled off to The Admiral Lord Nelson, and found it closed, so we tramped up in to the village for another visit to The Plough where we caught up with each others news and enjoyed a convivial lunch together.
The remainder of our day was getting ourselves sorted for leaving civilisation i.e. get food in, buy last minute vital items from the chandlery etc.

Over the next few days we need to do a bit of maintenance ahead of our date with a man-and-a-tin-of-bitumen.  The gunwales need some attention after the bashing they got from chains strung in the EA locks on the Gt. Ouse and the Nene, so first job for Himself will be to don the painters overalls and wield the masking tape and a paint brush and I will likely tackle the brass...Oh bliss.
Posted by Nb Yarwood at 18:34