Service with a WHAT?

Having checked the website for the Old Kings Head at Hillmorton and found that they did serve real ale and they were dog friendly we wandered along for a pint on Saturday afternoon.  This is a canal side establishment so walkers and dogs are not going to be unusual.   There was chalk board tacked on a gate outside  signposting, 'dogs this way' - thank goodness my pair are literate I thought...
We followed the sign to the nearest open door and entered a bar, went straight to the counter and ordered a couple of pints and a packet of pork scratchings for the boys.  Half way through serving us our bar boy noticed we had dogs and waving his arms about vigorously instructed us to go downstairs, NO dogs allowed in here he exclaimed!
'Why not?' I asked
'The food, the food, you will have to go downstairs!' and pointed to a staircase behind us, until now unknown to us.
'Ok, can we get our drinks then?' I asked - Admittedly, getting increasingly aggrieved by his antics and attitude by now.
'No, you have to go downstairs!'

Joe returned to the bar and got our drinks and I sat downstairs as instructed and seethed...

As it turned out, the door that we should have accessed the downstairs dog friendly area was a firedoor, a padlocked firedoor with the 'dogs this way' notice lying on a shelf inside and about six feet away from the door. 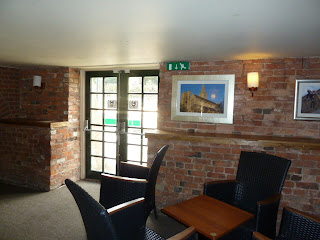 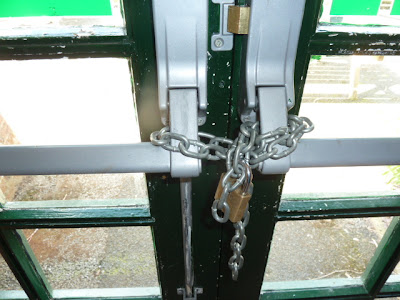 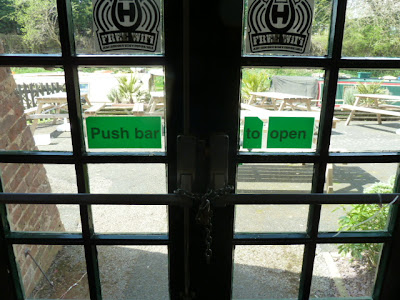 We did mention to a member of staff who popped down to our little dungeon that the fire door shouldn't be padlocked but you could hear the whoosh of air as it went in-one-ear-and-out-the- other' Nil comprende...
Yet more time passes and someone with keys arrives to open the door...wrong keys though and after a couple of minutes fumbling and fussing while Joe and I mentally counted the number of bodies that would/could be piling up with smoke inhalation, she went off for another set of keys.
A couple of minutes pass and staff member returns and eureka, the key works and we are released from our own little fire trap.

This is an establishment that likely pay's minimum wages, provides minimum staff training, who in turn provide minimum service and to cap it all , the Management overseeing operation is piss poor.
End of rant.
We will not be back..