We know 2+2 does not equal 5. However, some people like the owner of Jemima (below) can and do jump to the wrong conclusions if they don't have, or choose to ignore the facts. Yarwood was on the EA mooring at Littleport 21/22 June and we went off on our merry way with no plans to return. We were forced to return on 6 July to the moorings opposite the Swan Inn due to strong stream warnings on the Lark and Matilda Rose having engine problems. When Lesley went off to Essex on 9 July, I moved Yarwood over to the Swan Inn moorings to use their (paid for) mooring and electricy hook-up the give our batteries a good 24 hour charge and moved off 10 July.

Using his flawed assumptions, the owner of Jemima having seen us in June and again in July decided that we must have been at the Swan continuously and proceeded to tell other boaters about Yarwood overstaying. Fortunately, one of the people he shared his inaccurate moan with was Graham from MR. Graham tried to put him straight without much success as this individual seemed to be reluctant to be separated from his pet grievance that he had probably been carefully nursing.

We all like to have a grumble, but if it involves making accusations in public against a specific person (or boat in this case) it should at least be based on fact. 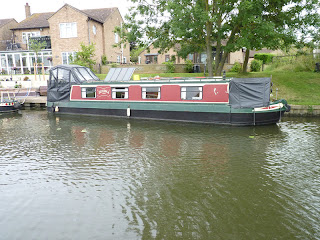