A Wash in Waterbeach

I was pulling off of Mother's drive at 6am yesterday morning, the car stuffed with dogs, clothes and an assortment of goodies that had been delivered to Mum's during the week.  I arrived in Waterbeach, where Yarwood and MR were reputably moored up,  then plugged in the sat-nav to locate the specific road I needed.  By 7.15 I was walking along the flood bank near Bottisham lock.  I had spotted the boats and, in order not to disturb the MR crew at this ungodly hour, I walked past the boats aiming to approach Yarwood without walking past MR.  As I was loaded with bags and boxes, the dogs were loose and they had not taken on board my consideration for sleeping boaters; sadly the MR crew were rudely awoken by the Labrador-boarding-party which woke Baxter and Muttley who in turn,...you can guess the rest.

We are stuck here at Waterbeach where the R. Cam is on strong stream and is breaking its banks.  The lock, Bottisham Lock,  just behind our current mooring has been closed to navigation much to the bewilderment of  some boaters who were attempting to get up the R. Cam yesterday. 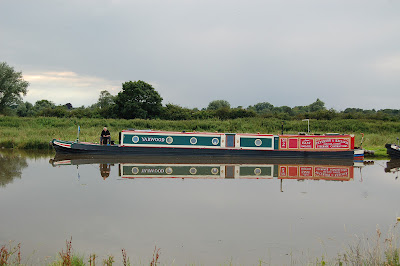 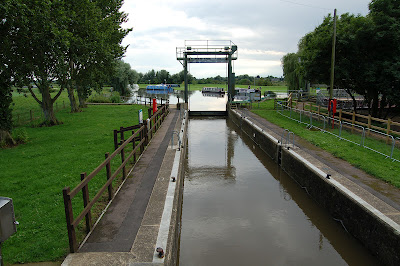 Bottisham Lock.  The bottom gates have been locked open to prevent use and the guillotine gate, currently in the down position, might well be used by the Environment Agency (EA) as a flood control.  Normal use of the lock doesn't allow boaters to raise the guillotine gate if the down stream gates are not fully closed.   EA are able to override that and operate the guillotine independently which effectively converts lock into sluice. 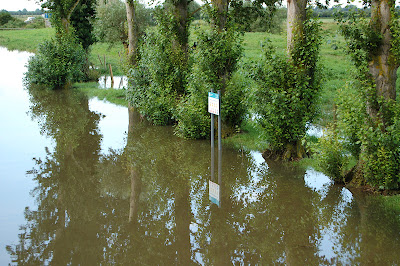 Immediately in front of that sign is the lock landing, now 18 inches under water 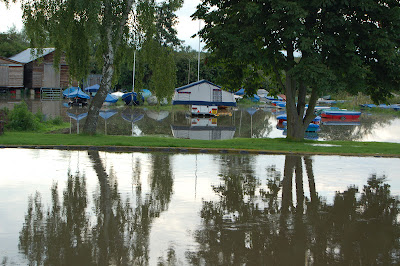 Whilst walking along the flood bank towards Clayhithe you pass the Cam Sailing Club.  Marooned in it's own lake (centre picture) is a deployed folding camper! 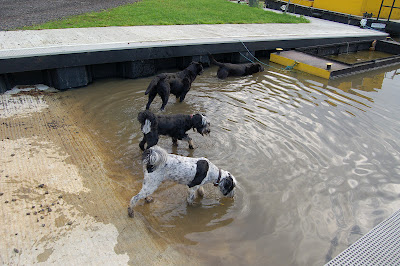 As I took this photo of the dogs taking-the-waters on the Cam notice Fletcher moving towards the work flat at the top of the shot.  He was reaching for the mooring line which he delicately took between his front teeth and pulled...result, one untied boat!
Jill and I had to hurriedly get the boat secured again before it took off down stream. 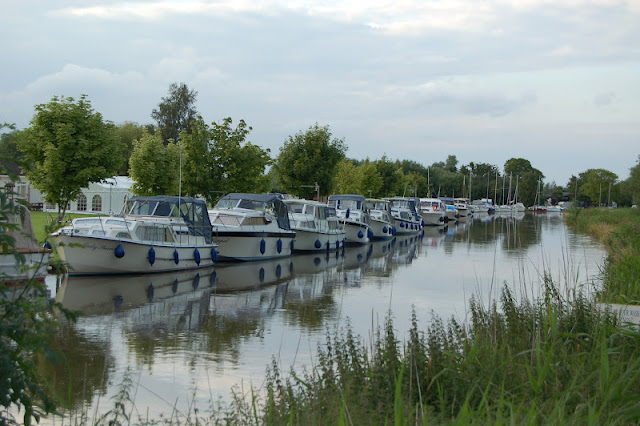 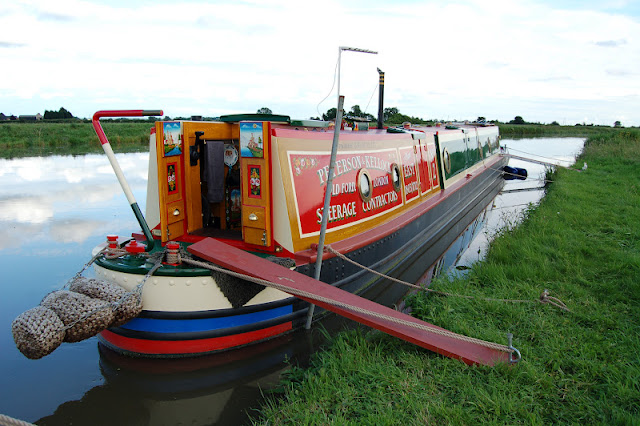 Yarwood secured in flood conditions, mooring planks to keep her away from the bank and a handily found length of scaffold pole pressed into service at the stern.
Posted by Nb Yarwood at 10:23