Castle to Cromwell over,

Saturday dawned bright and sunny and windy.  After breakfast and dog walking I washed one side of Yarwood and then Joe and I turned her around by letting the wind and current take the bow while we hauled on the stern rope. Once safely secured again I washed down the other side so we have a dust free boat for a short while.  Advice from the man who signed out boats, Caxton and Yarwood, was to wash regularly and wax occasionally to preserve the paintwork so we I stick to that sage advice when I can.
Come the afternoon and Lisa and David have arranged a guided tour of Newark Castle. Derek and Sheila of Nb. Clarence were otherwise engaged, Margaret was baking, Joe was looking for a leak...so Geoff and I joined the WaL crew for the tour. 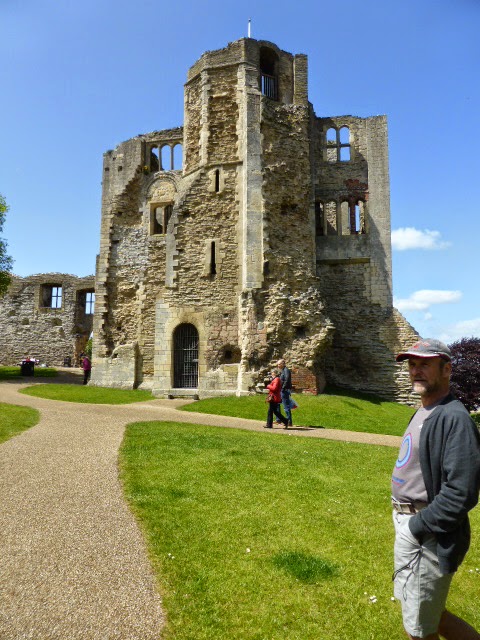 Newark Castle Gatehouse and Geoff trying to walk backwards out of shot...
We met the Castle Warden, a lady called Floss who had formerly been a Bank Manager but unhappy in  her work had thrown it up , taken a degree in History at Lincoln and applied for the role of Castle Warden. Floss was passionate about Newark and in particular the Castle and setting the historical context of when and when the Castle was built we set of on a tour of the ruins.   Newark is/was on the crossroads of the great north-south Roman road now known as the A1 and the west-east Roman road the Fosse Way now known as the A46 and therefore the area was always significant for defence purposes...if you controlled the main routes you had the upper hand so to speak.
Post Norman Conquest a Motte and Bailey (mound and earthworks) was erected and remained in situ until The Bishop of Lincoln a hundred years later gained control and decided to build a Castle or more robust construction. Getting permission from King Henry I to build a Bishops Palace rather than a Castle.  By exploiting a few 'planning loopholes' up went the Castle. 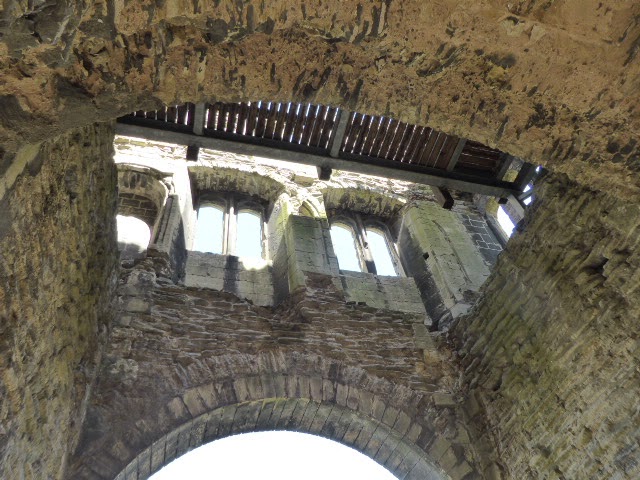 Imagine the floor in place in the space above the gatehouse and that is the room where King John died in 1216 after his ill-fated crossing of the Wash. 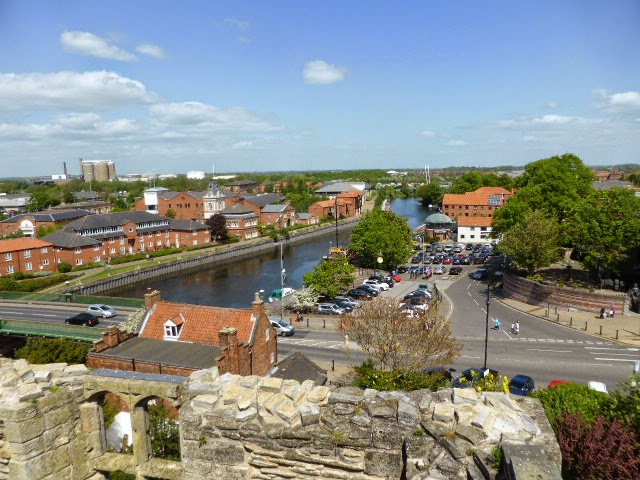 View from the Gatehouse tower 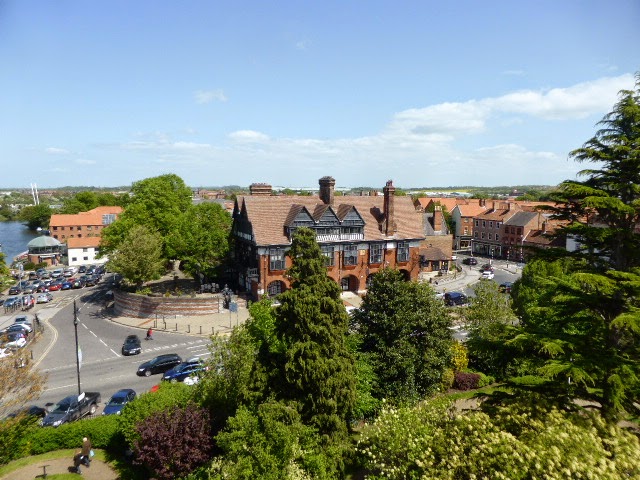 Looking down on The Ossington Temperance Hotel 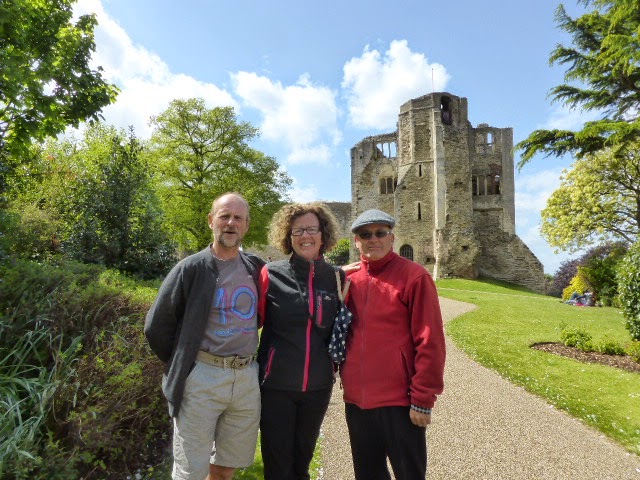 Geoff, Lisa and David after our fascinating and informative tour 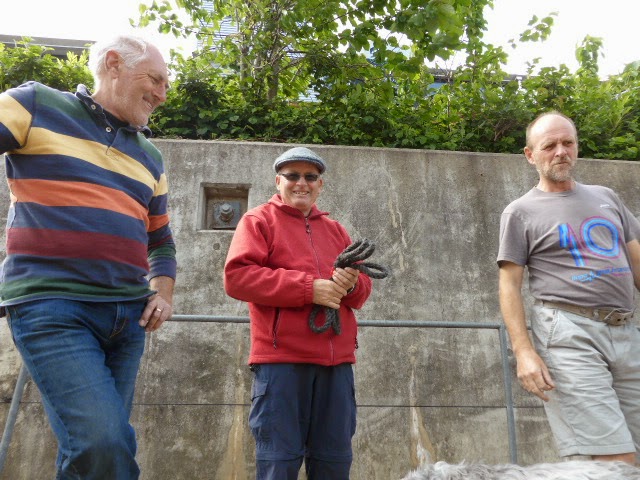 Chewing the fat, Joe, David and Geoff.  We were preparing the four boats to leave Newark and head downstream to overnight at Cromwell Lock, the start of the tidal section of the Trent.

We were at Nether Lock in Newark by four thirty so that the lockeeper could 'pen' us through before he went off shift.  there were slight issues getting into the lock because they had had a power outage and the generator wasn't kicking in...it also meant that the traffic lights system the lock uses was playing silly buggers so Lisa was upbraided for going through a red light...that had gone green and then back to red.  A little unfair given that Lisa wasn't 'in charge' of the boat but the rest of us have enjoyed ribbing her about it anyway! 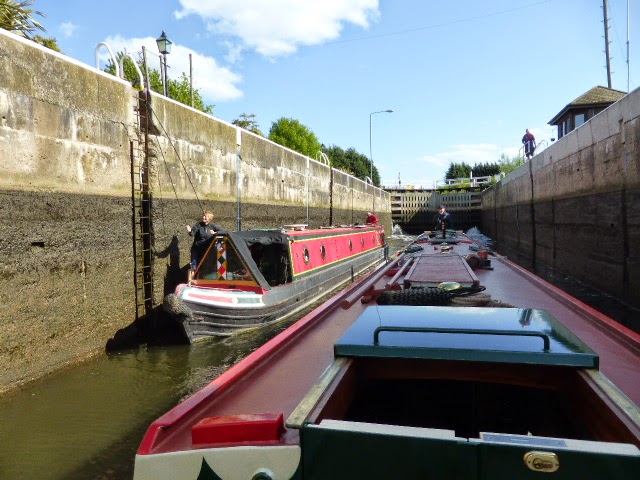 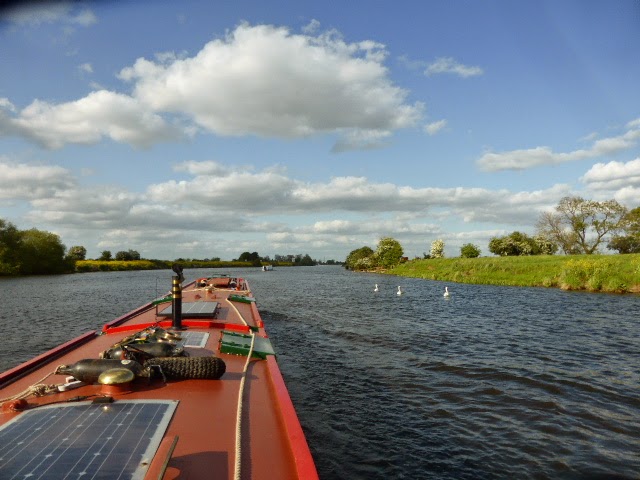 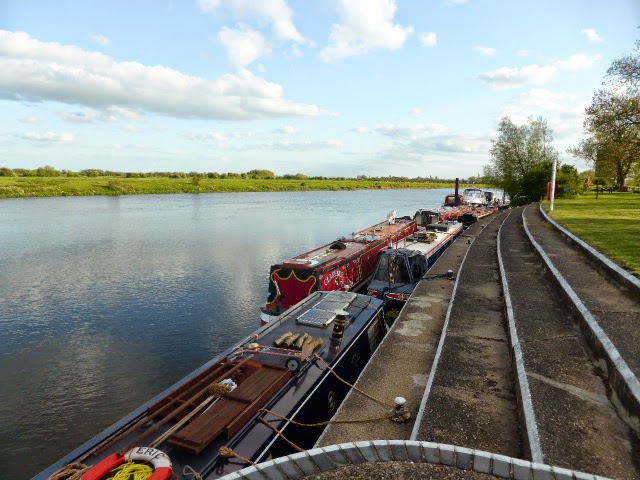 Moored up ready for the tidal stretch on Sunday
Once securely moored out came the G&T's care of Lisa and the beers, care of Geoff and we all piled into Nb. Seyella to discuss books with Margaret; on the agenda at this impromptu book club was Margaret's review of Fifty Shades of Grey and this prompted quite a bit of hilarity!
Tomorrow we hit the tidal Trent.