Nottingham to Newark, a journey of 25 miles, was completed in three stages.  Leaving Nottingham on Tuesday morning we serviced Yarwood at Meadow Lane lock before dropping down on to the River Trent and following Nb. Clarence and Nb. What a Lark down stream to Holme Lock where Nb. Seyella was waiting for us.  No photo's of this part of the cruise because it was blowing a hooley and I was hanging on for grim death...perhaps we shouldn't have moved?  When we did arrive and spotted What a Lark (WaL) and Seyella Joe couldn't get Yarwood in against the wind so  after an attempt to turn her against the current and moor facing the flow failed Joe used Yarwood's grunt and big prop to reverse against the flow and get in behind WaL.   WaL had had even more difficulty and had damaged the swan neck (steering gear) slamming the boat against vertical girders. Fortunately the crew, David and Lisa, were quite unharmed!
Nb. Clarence missed the moorings and were obliged to drop down through Holme lock. There they moored up and returned to a very crowded Seyella, - we were all aboard, - for tea and doughnuts. 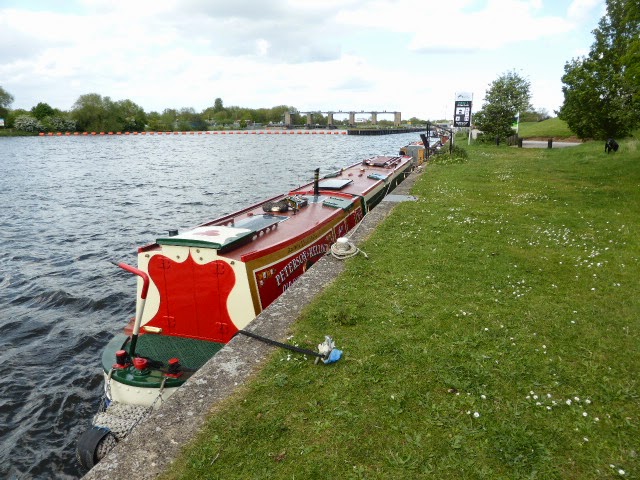 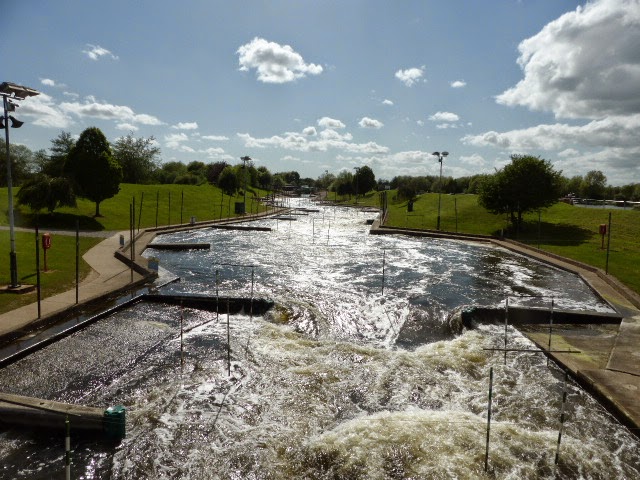 Canoe slalom/rapids course?
Holme Pierrepoint is the National Watersports Centre and we were moored adjacent to the park so ideal for a we wander with the dogs. 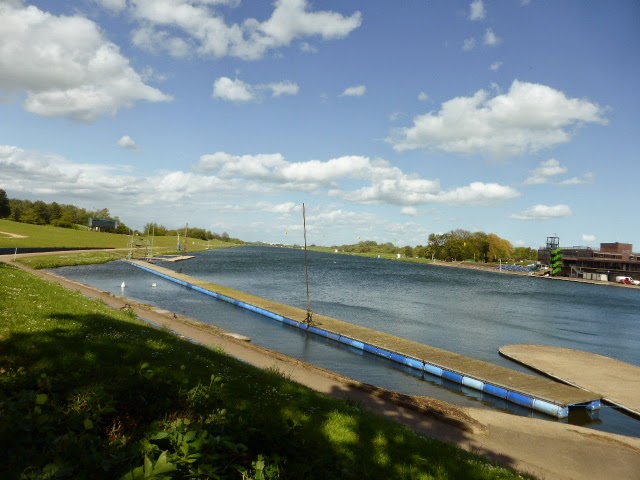 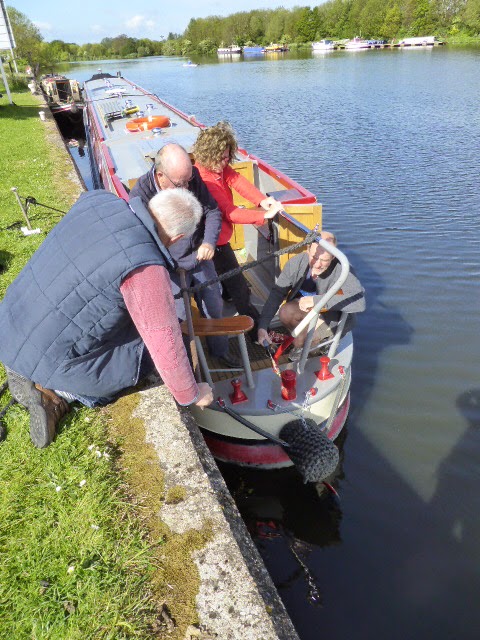 All hands to the tiller on WaL
The very next morning, Wednesday, an attempt was made to repair WaL's Swan neck.  Lisa supervised the procedure and David, Geoff and Joe provided the muscle, and expertise, for the task.  Sadly, the blow torch couldn't generate enough heat to allow the steel to be pulled back into shape so it would have to be oxyacetylene and the ministrations of a boatyard.

We were 'booked' to go through Holme lock at 10am and all three boats were there on time but a single boat had gone through moments before so we had to wait for the lockie to refill the lock for us. 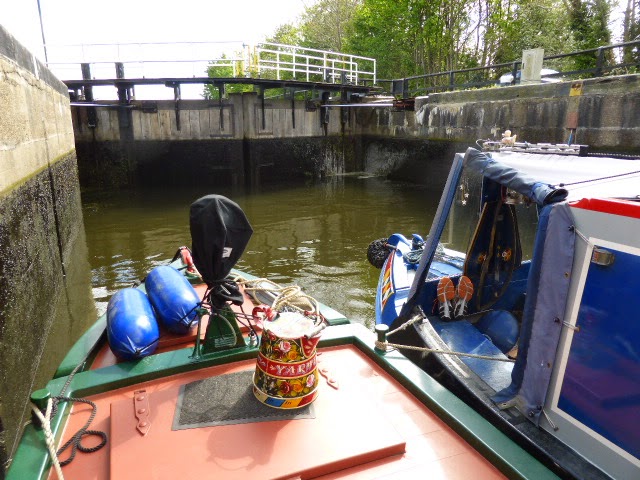 Seyella secured to Yarwood
The boats have to be secured fore and aft in the locks.  There are vertical cables inset in the lock sides and you pass your line behind the cable and hold on while the lock empties or fills. Mags on Nb. Seyella is not so confident on her feet so we have been sharing the task.  Seyella pulls alongside Yarwood and I secure Mags line to Yarwood and then secure Yarwood's line to the lock cables. 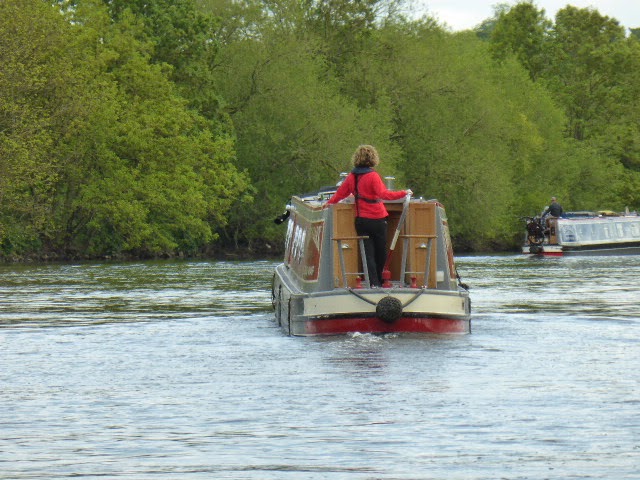 Lisa takes the tiller aboard What a Lark 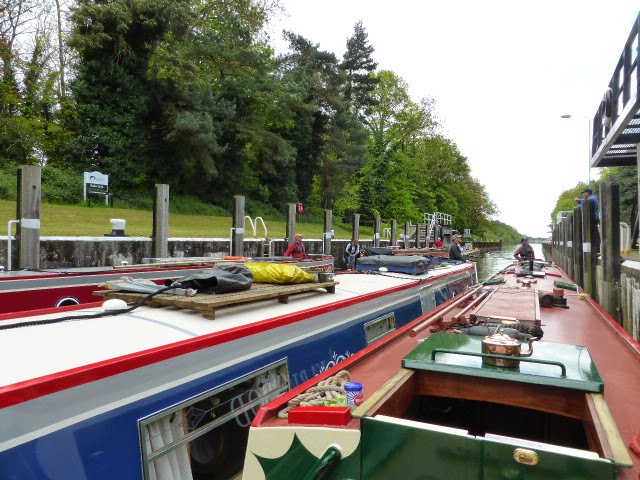 All in Gunthorpe Lock 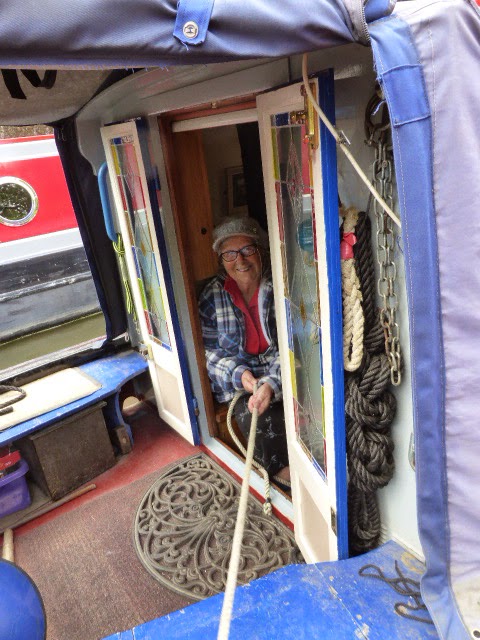 Mags doing her bit from a safe position 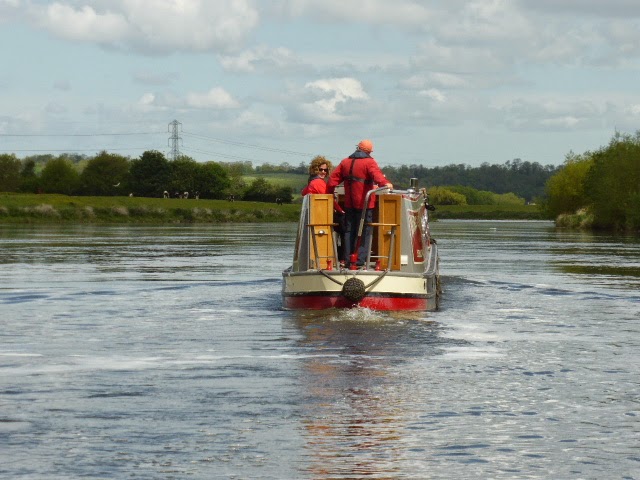 Leader of the pack.. 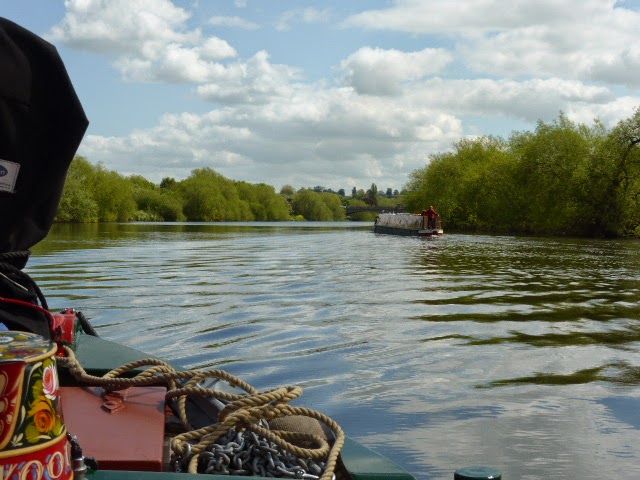 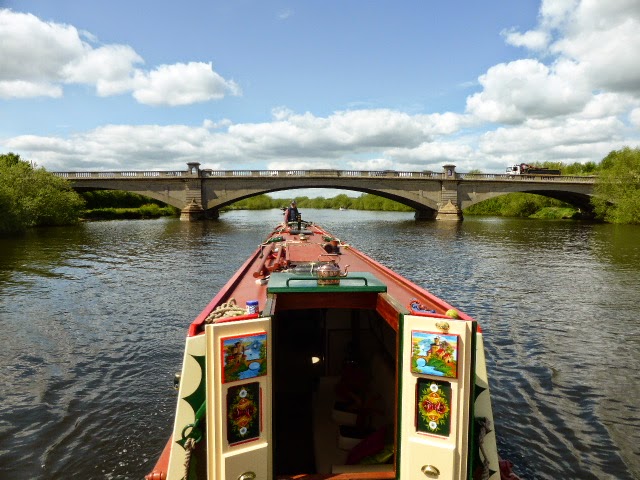 Passing under Gunthorpe bridge, the first vehicle bridge since Nottingham 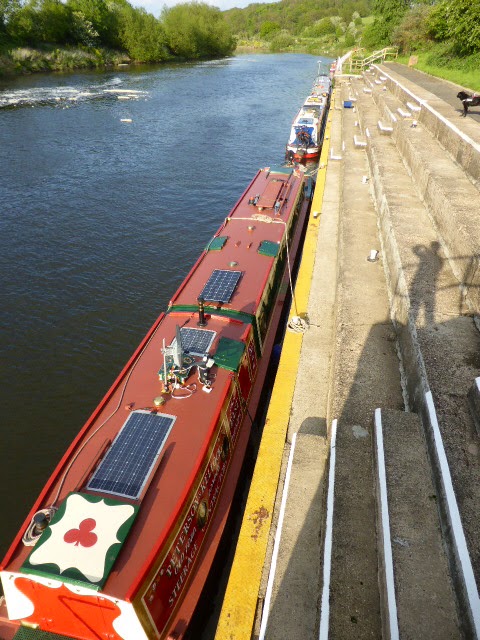 Moored below Hazelford Lock
Once safely moored up seven of us plus dogs went off for a walk to the nearest village, Beasley. In Beasley we found a quaint little Public House and enjoyed a pint or a glass of vino before walking back along the river path to the boats.
The following morning it was cold and windy again for our push into Newark where we plan to stay a couple of days before tackling the tidal Trent. 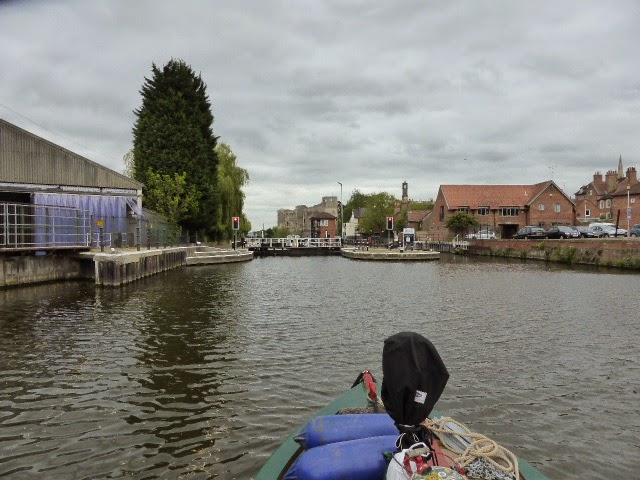 Approaching Newark Town Lock and holding off for an ascending boat 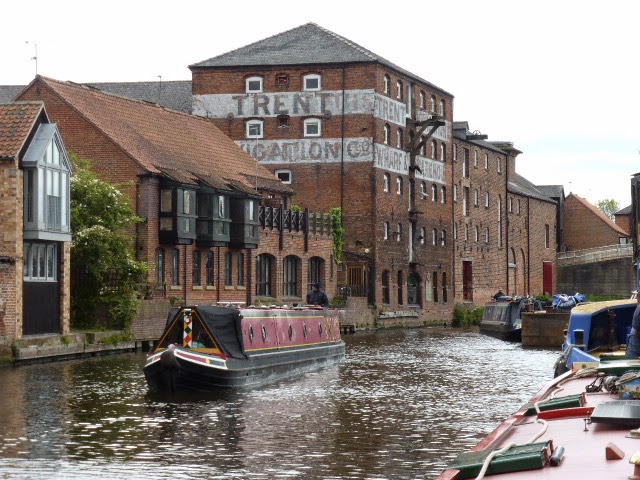 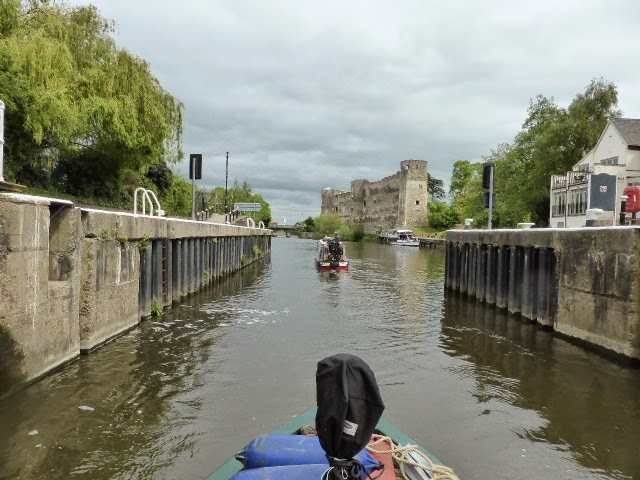 Out of the lock, Seyella takes the lead towards the town moorings. 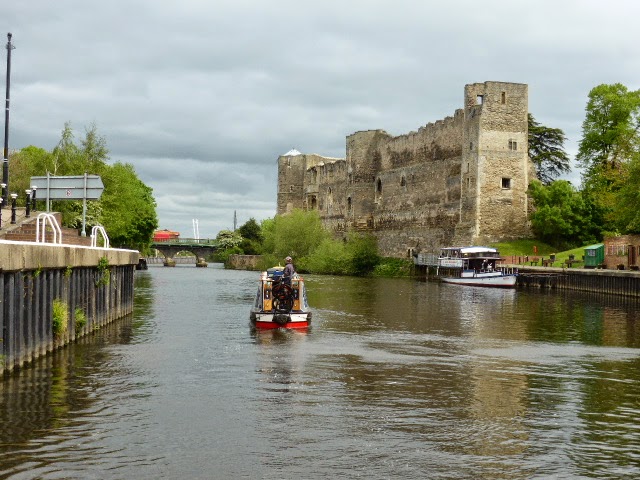 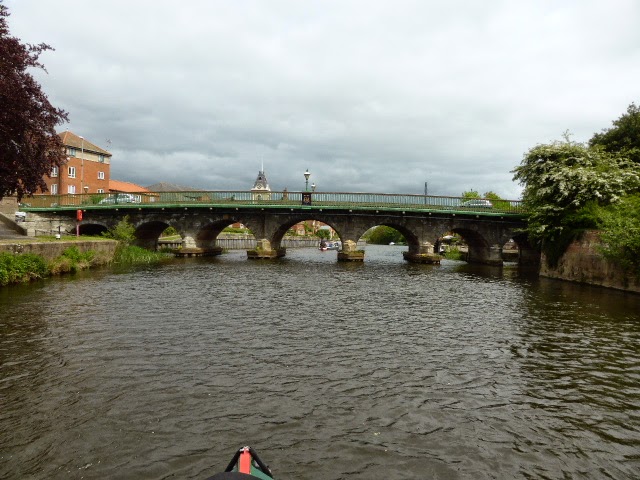 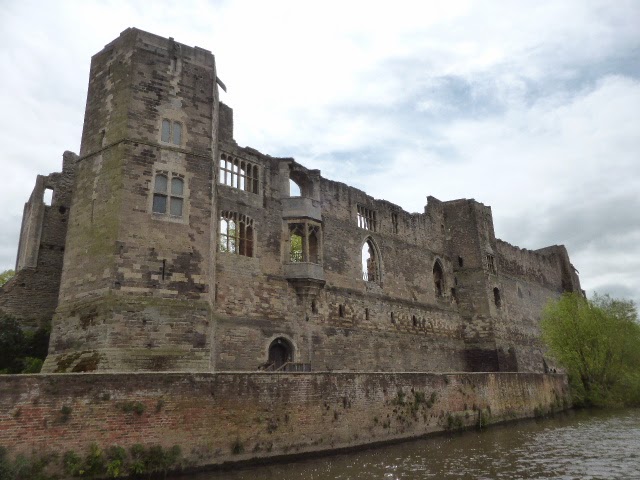 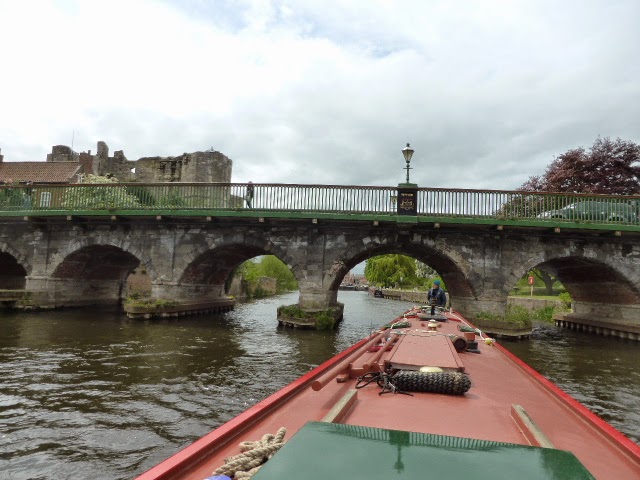 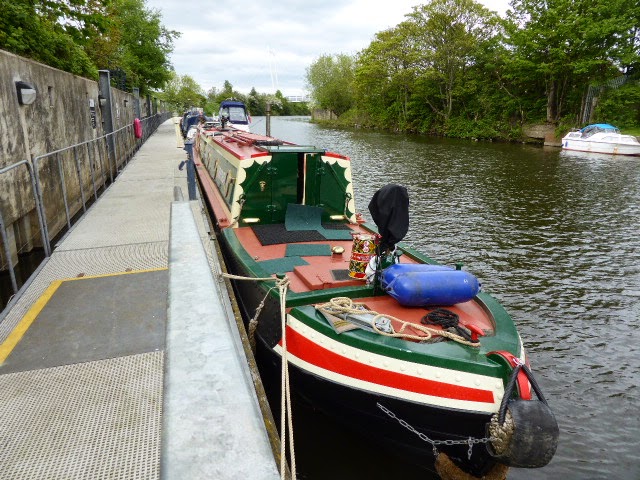 Moored up and ready to explore the Town
Posted by Nb Yarwood at 09:15